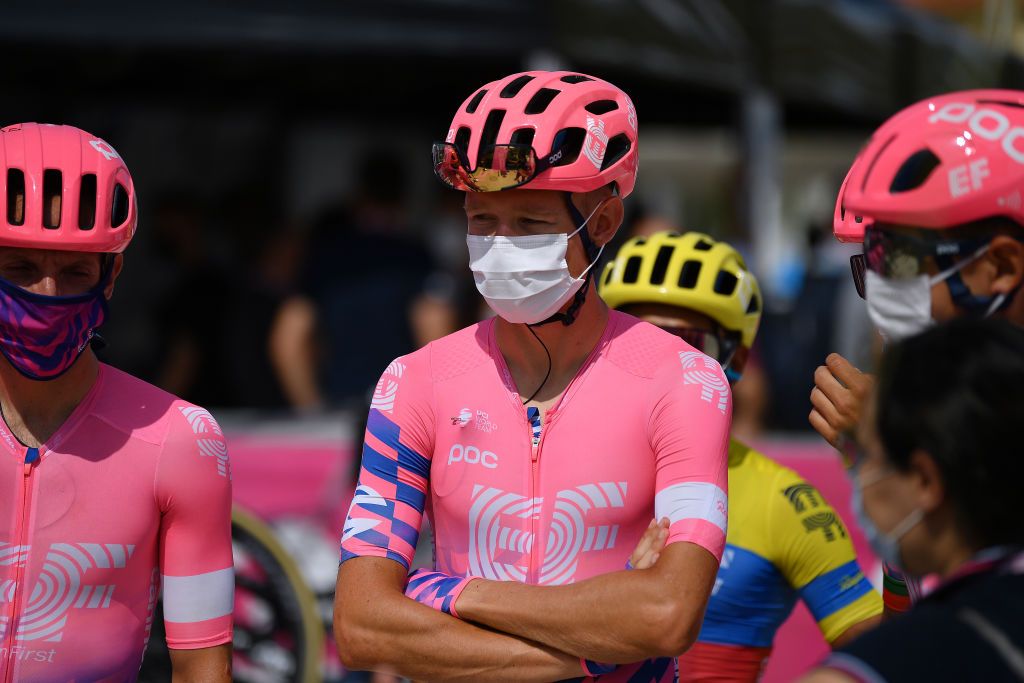 After being reeled in less than three kilometres from the line on stage 5 after punching clear of the bunch on the final steep ramp of the day and then going out in the break on stage 6, EF Education-Nippo’s Lawson Craddock was at the front of the Critérium du Dauphiné for the third day in a row as the race headed for La Plagne.

Although he didn’t make it into the initial break that went clear, the Texan was part of the group that bridged up to the front group later. Although all of the escapees were eventually reeled in, Craddock had done enough by that point to take the lead in the mountains competition and will now try to defend the blue polka dot jersey on the final day.

“It’s incredible how long the break took to go clear. I think we’d done 70 kilometres before those five guys went clear. It was a full gas fight to that point,” Craddock said at the finish. “We knew that it was possible to take the mountains jersey today and we definitely wanted for me to be in the breakaway, and hopefully to have a teammate.

“Fortunately, the boys did a great job. I didn’t have the leg to be in that first one, but I got super lucky when the race opened back up and on the category four climb we were able to get away and Michael Valgren was in there,” the American explained.

If that was tough, what came next was even more so, as Craddock’s chase group, which included mountains leader Matt Holmes (Lotto Soudal) closed in on the riders at the front on the super-category Col du Pré.

“It’s one of the hardest, perhaps even the hardest, climb that we’ll do this week. But with Michael in there it was just perfect for me because we were able to distance Holmes halfway up the climb,” he said. Once the Lotto Soudal rider had been dropped, Craddock then had to take advantage of that fact.

“Michael had everybody on the limit then, including myself. I don’t know how many times I had asked him to slow down. But, fortunately, we were able to bridge up to the leaders before the top,” said Craddock, who capitalised by taking maximum points at the summit of the Pré, then led over the second-category Cormet de Roselend a few kilometres later.

“My body hurts really bad from what Michael just did to me, but it’s been a really good week. The last couple of days have been extremely challenging and tomorrow is also an extremely tough day, so it’s an honour to be in the KOM jersey going into the last stage,” said the EF rider. “I know the pedigree that the Dauphiné has and we now need to finish this off.”

SOURCE: CyclingNews   (go to source)
AUTHOR: Peter Cossins
All copyrights for this article, including images, are reserved to the original source and/or creator(s).