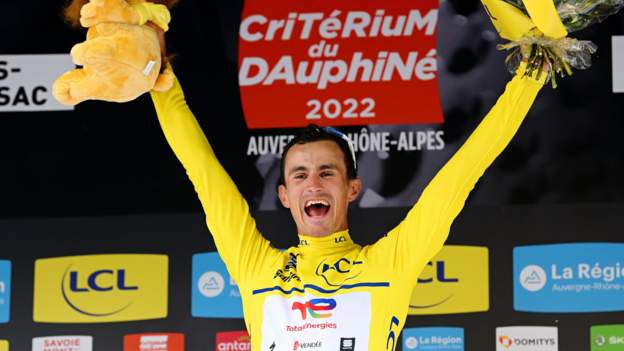 Alexis Vuillermoz, who feared for his life after a crash last season, continued his remarkable recovery with a sprint victory to take the overall lead in the Criterium du Dauphine.

The Frenchman, 34, broke a kneecap in 2020 before crashing badly at the Tour of Switzerland last June and doctors said he would not race again.

“A year ago, I fractured my pelvis,” said Vuillermoz, who ended up in intensive care.

“I was even afraid for my life”.

He added: “It’s amazing. After two years of hardship I could have stopped my career, but despite everything, I wanted to come back.”

Vuillermoz started the season strongly, with six top-10 finishes but he added: “All that was missing was the victory. This is the icing on the cake.”

With five riders out in front, Frenchman Olivier Le Gac launched an attack, but he was passed by both Vuillermoz and Anders Skaarseth.

“The sprint was a bit messy,” said Vuillermoz.

“I saw Olivier launch the sprint from very far away at 300 meters, he opened a small gap. I didn’t think I would be able to come back, but I saw that he got stuck a little bit at the 50 meters.”