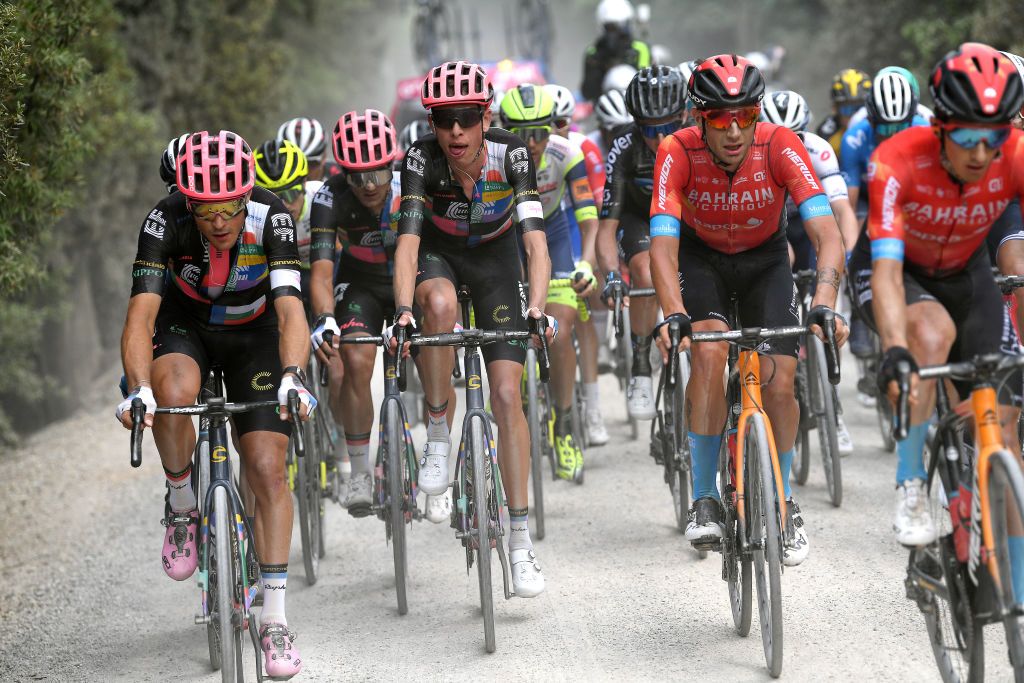 Damiano Caruso has spent most of his career working for his leaders, both on and off the road. In years past, on those days when men like Vincenzo Nibali or Tejay van Garderen preferred to avoid the media scrum and head straight for the sanctuary of the team bus, the amiable Caruso could usually be relied upon to stop to give interviews on their behalf.

Midway through this Giro d’Italia, however, Caruso finds himself in the alien position of being flagged down to talk about himself. After another smooth display on the rocky road to Montalcino on stage 11, the Bahrain Victorious rider moved up to third place overall, 1:12 behind maglia rosa Egan Bernal (Ineos Grenadiers) and ahead of a number of lofty names.

On Via Strozzi on Wednesday many tired leaders averted their gaze from the fenced-off mixed zone that housed reporters past the finish line, gliding on down the hill towards their buses. Caruso, either through his grounding as a gregario or innate courtesy, has never mastered the art of the thousand-yard stare. When his name was called, the Sicilian simply wheeled across the road and leant against the barriers to talk reporters through his day. Old habits die hard.

“Today, I think we all finished tired. It was a really very hard and demanding stage. From the moment we hit the first gravel sector until the end, we didn’t hold back,” said Caruso, who also finds himself in the unfamiliar position of having teammates devoted to his cause.

“I have to thank my team a lot, and especially Pello Bilbao who was my guardian angel in the finale. I want thank all the staff too, because they looked after all the details, like the bike and the feeds during the race. It’s all important.”

Caruso survived Ineos’ winnowing process on the gravel better than most, and he was still part of the very elite group that remained in contact with Bernal after they came off the dirt roads for the final time with a shade under 9 kilometres to go. He was unable to follow when Bernal accelerated viciously on the Passo del Lume Spento in the finale but he kept the flame alive, coming home 24 seconds down on the Colombian in the company of contenders like Simon Yates (BikeExchange).

“The first sector was the hardest, because the gruppo was still together and we were going at high speed to fight for position. I was caught behind there, but thanks to my teammates I was able to regain positions and I stayed with the front group after that,” said Caruso.

“I never turned around to see who was still in the group or not, I just thought about pushing on. The last 50km were practically an individual time trial. You just had to think about going flat out and nothing else.”

During the opening ten days, the Giro was billed in some quarters as a duel between Bernal and Remco Evenepoel (Deceuninck-QuickStep). As the dust settled on Wednesday, it was hard to shake off the impression that Bernal – now 45 seconds ahead of Aleksandr Vlasov (Astana) and more than two minutes up on Evenepoel – is in a league all of his own on this Giro.

“Once again Bernal demonstrated that you don’t win a Tour de France by chance and he’s the real point of reference of this Giro, I think. He’s the one to beat,” said Caruso, who placed Evenepoel’s travails on the sterrato in the context of his dramatic crash at Il Lombardia last August.

“This is a boy who had a very serious accident last year. Today’s downhill sectors were really very demanding and difficult. It might have been that he had a bit of fear, a bit of a psychological holdover from that crash, and that’s something that is really very normal.”

Perhaps it was inevitable that a post-stage conversation with Caruso would drift into an assessment of the grandees of the peloton, but it was worth steering the discussion back towards his own position. The 33-year-old who has made a point of living in his native Ragusa rather than migrating to Monaco or Switzerland – “It’s the place where I want to live, with all its advantages and its defects,” he told Cycling News in 2019 – is currently taking up residence on the podium.

Caruso has already finished in the top 10 of all three Grand Tours, placing 9th at the 2014 Vuelta a España, 8th at the 2015 Giro and 10th at last year’s Tour de France, while riding for Mikel Landa. Now, after Landa’s enforced abandon in the opening week, he finds himself in the novel position of racing for himself over three weeks. The experience, he suggested, is one to be savoured rather than feared.

“Dreams can sometimes come true. The important thing is to keep believing,” Caruso said. “I want to enjoy it, and ride without thinking too much about the podium or something big, because that only saps your energy. I just want to concentrate on my performance.”