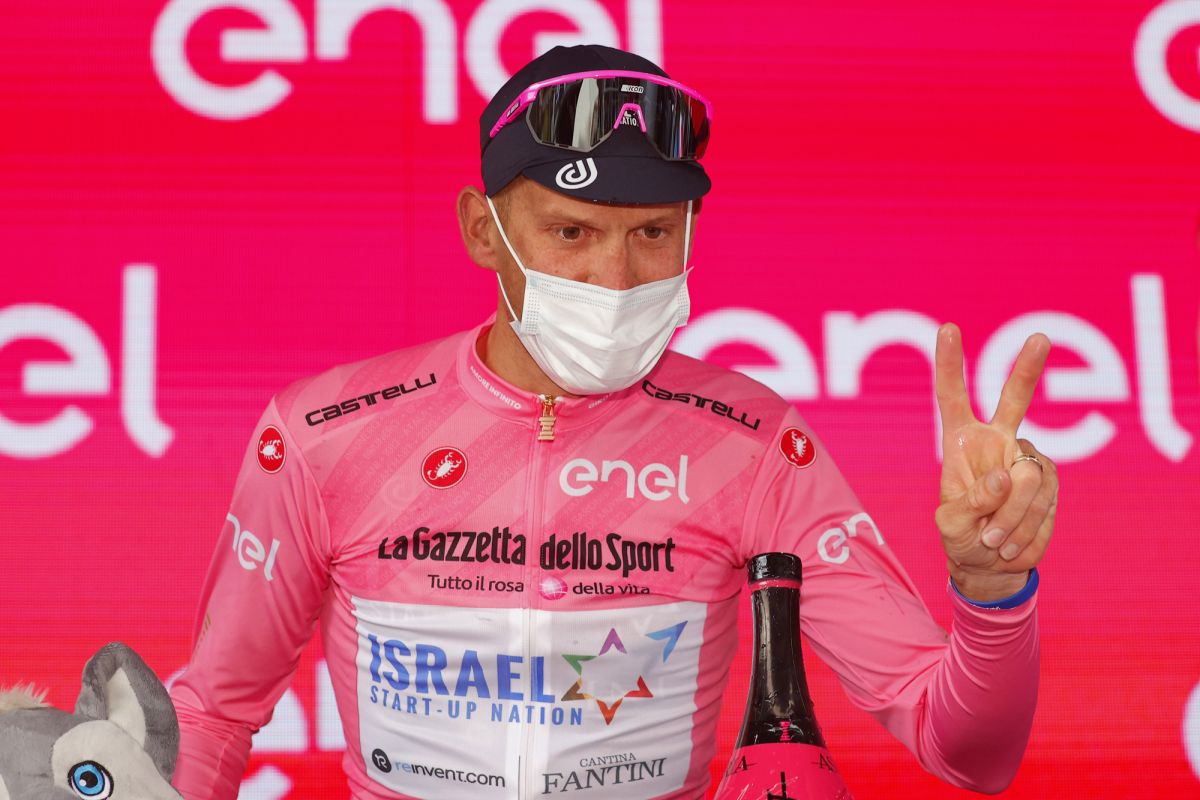 For 11 years as a professional, and 17 more on a bike before that, Alessandro De Marchi’s place was always off the front and in the wind, but usually off the podium and out of the prizes. It certainly wasn’t here, wearing the maglia rosa of the Giro d’Italia.

“I feel a bit disoriented, almost out of place,” the Israel Start-Up Nation rider said apologetically in Sestola, and then repeated himself softly. “I feel a bit out of place. I was maybe too used to trying, too used to never giving up, but still never picking up the big prize. I think until I’m alone in bed tonight, I’ll still be disoriented like this. I might even cry a bit, but then I’ll be ready for tomorrow.”

De Marchi has claimed five victories in his career, including three stages at the Vuelta a España, but a rider is more than the sum of his palmarès. For over a decade, the Friuli native has been lauded for his honest endeavour more than his rare wins. This stint in the maglia rosa won’t alter the course of his career, but it serves to crown it.

“With my style of racing, I know the chances of winning are always low, but the important thing is not to give up,” he said. “I’ve always been generous in my efforts, but I don’t think it’s been a mistake for me to race like that.”

In keeping with the tone of his career, De Marchi’s maglia rosa didn’t come easily. He had to battle his way into the sizeable break that formed shortly after the race left Piacenza, but once the group built a lead of almost eight minutes, he began to warm to the prospect of the pink jersey.

When three riders from the move slipped clear over the penultimate climb, the 35-year-old feared he had squandered his chance, but he chased doggedly and then clawed them back on the stiff haul up the Colle Passerino. Joe Dombrowski (UAE Team Emirates) out-kicked him on the steepest gradients to escape for stage victory, but De Marchi chased again over the top, limiting his losses sufficiently to take the overall lead.

“I’d have been very disappointed if I’d lost the opportunity because of my own mistake, but I never give in,” said De Marchi. “The thing that made me believe in my chances today was that it was a battle from the start rather than a soft break. It was the kind of situation that opened an opportunity for me.”

The Giro’s post-stage press conferences always run rather longer when an Italian rider is at the top table, but the line of questioning was a little different from usual for De Marchi. He was barely asked about the stage and nobody asked how long he thought he could keep the jersey. For the record, he holds a lead of 22 seconds over Tuesday’s winner Dombrowski, and he should hold the jersey at least until Ascoli Piceno on Thursday, and perhaps as far as the weekend.

De Marchi spoke instead about the yellow bracelet he wore on his wrist, the symbol of the campaign for justice for his fellow Friuli native Giulio Regeni, who was abducted and killed in Egypt in 2016. The case later became a political flashpoint in Italy when mayors and regional presidents from the far-right Lega party began to remove or obscure banners in support of the Regeni campaign. Last year, meanwhile, the Regeni family and rights groups criticised a $1.2 billion arms deal between Italy and Egypt, which has so far failed to bring his killers to justice.

“I don’t see anything political in this campaign, it’s simply two parents who want the truth. I’d never want to be in their situation,” said De Marchi, who has long shown a willingness to engage publicly with civic issues, a rarity in a sport where riders’ social media output is so often limited to carefully curated sponsored posts.

“I’ve always expressed myself on issues that are beyond any partisanship. What I’ve expressed are fundamental things, like civil rights. Some people have criticised me for it, but before being a cyclist, I’m a husband, a father and a citizen.”

De Marchi’s everyman qualities also extend to his cycling life. In a sport increasingly measured in watts and grams, the Italian offers a more accessible vision of the sport. Eleven years of professionalism, hundreds of race days and umpteen attacks have yielded those few but presitigious wins and, now, this precious pink jersey. No matter, a cycling life spent trying and failing, and then trying better and failing better is its own reward.

“My way of doing things is a lot more romantic than modern cycling allows, but I’ve always interpreted cycling in this way. I was taught that when I turned professional with Gianni Savio,” said De Marchi.

“Maybe my style isn’t the most practical. There have been races where I spent the day in the break and got caught, and I was still happier with those than races where I got a placing.”