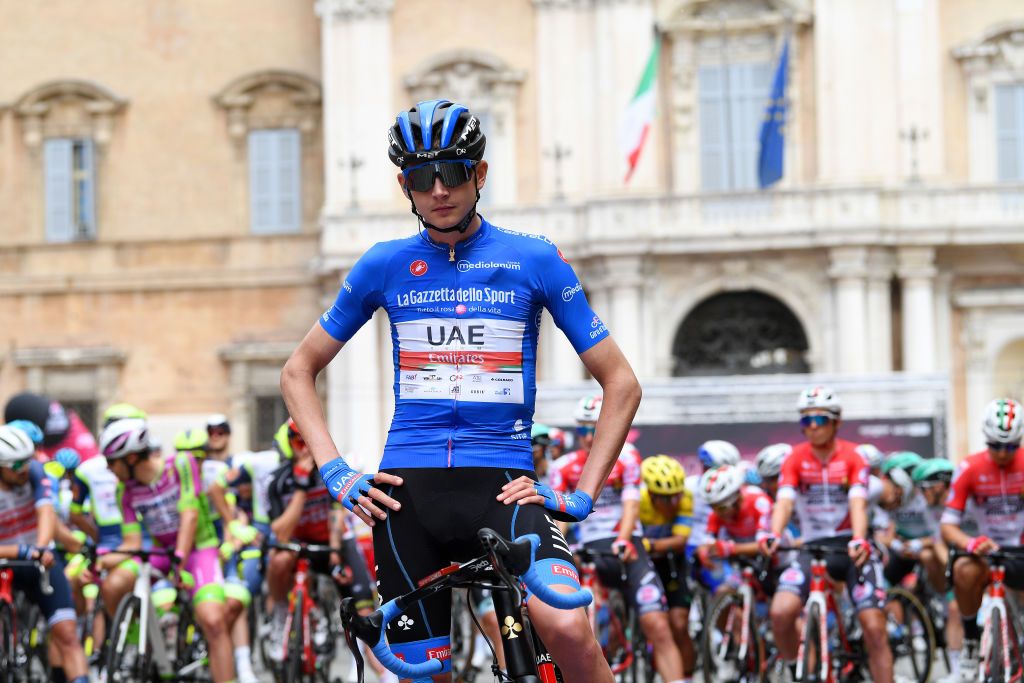 Joe Dombrowski makes a change for 2022, heading from UAE Team Emirates to Astana Qazaqstan following a season which saw him take the biggest win of his career so far with a stage at the Giro d’Italia.

The American climber turned pro in 2013 and has since raced for some of the most notable teams in the peloton, with Sky and EF also among his career stops. Now 30, Dombrowski heads to the Kazakhstani team, where he’s looking forward to racing alongside Vincenzo Nibali, who returns to the squad after five years away.

Speaking to Cycling News from his first training camp with the team, Dombrowski compared the chance of riding with the Italian – one of just seven riders to have won all three Grand Tours – to playing alongside basketballer Michael Jordan or golfer Tiger Woods.

“I think it’s actually exciting to have a rider like Nibali coming into the team, in a sense that if I look back at my time as a rider in the WorldTour, being teammates with guys that are like – if you look at other sports – if you played with Jordan or Tiger Woods or Kobe [Bryant]. It’s cool to be a teammate with someone that’s such a big name in the sport and I guess I’ve always admired his race craft,” Dombrowski said.

“Obviously, he’s a really strong rider and one of the best of his generation and winning all the Grand Tours is quite a palmarès, but one of the things I’ve found most intriguing about him as a rider is the way he has that not only physical ability but also exceptional race craft,” he added, referencing Nibali’s stunning comeback victory at the 2016 Giro d’Italia.

“I think that when I stop cycling and look back at people that I was really happy I got a chance to be teammates with, I think he would be one of them.”

Nibali himself has two Giro victories to his name and will be returning to the race for 2022 in addition to riding all five Monuments. The Italian Grand Tour is a race that Dombrowski has an affinity with, having raced there six times and achieved his best-ever GC result with 12th in 2019.

He said that he doesn’t yet know exactly what his race schedule will be for next season but noted that it would be a dream to do the Tour de France while also recognising that the Giro is best suited to his style and ability.

“I think I did my first Grand Tour in 2015 and since then I’ve always done the Giro,” said Dombrowski. “I feel really comfortable and at home at the Giro and with my characteristics it’s maybe the race that suits me most on the calendar.

“Long climbs, hard stages and typically a hefty second half of the race with a lot of hard mountain stages. For me, it’s almost like the race gets easier as people get more tired.

“As you noted, I’ve never done the Tour de France and it would definitely be a dream to do so. I live in Nice and speak French and my neighbours always ask if I’m doing the Tour de France this year. It would be great if I could have the opportunity but at this camp there will be a sit-down to talk about the race programme and our expectations. If that’s in there, I’d be thrilled but, like I say, I feel comfortable with the Giro. Maybe I could do both.”

This year, Dombrowski went to the Giro and, despite not finishing the race for the first time in his career after a painful stage 6 crash while wearing the mountains jersey, he took his first WorldTour win with a solo ride to the summit finish at Sestola.

Throughout his career, Dombrowski has balanced working for GC leaders such as Rigoberto Urán, Michael Woods, and David de la Cruz with taking his own chances at glory in the mountains. At the Vuelta a España in August he was in the mix for another Grand Tour stage win, finishing second on Picón Blanco behind Rein Taaramäe.

“Unless you’re really one of the best of the best sprinters or GC riders, which we can probably count those guys on one hand, you kind of need to throw caution to the wind a bit and pick your days to go all-in,” he said.

“You sort of have to allocate your energy in the most efficient and intelligent way in the sense that, depending on the composition of the team, you’re going to have a certain role – if you have a sprinter or GC leader to work for. So, it’s about making the most of that when you’re needed for the team and doing the minimum when you’re not needed, unless there’s an opportunity when it can arise for you.

“So, it’s about finding in the Grand Tour narrative where your space is. So, like you say, with the Giro, UAE is a team with a lot of strong riders, so I’d say most of the time my role is to help the team leaders. But the stage I won there was one of those days where I had an opportunity to have a free card, and when that comes you have to make the most of it. Sometimes nothing comes of it and sometimes it can change your career.

“I would say in some ways you kind of build up this wealth of experience that you don’t even really recognise that you’ve done so, but just by doing it you learn. If anything, I suppose I feel more mature about things. Going back to the narrative of a Grand Tour and understanding where your opportunities lie, I think with experience you kind of have a better feel for the rhythm of races and where your place is and how you can contribute.”

Dombrowski will now head into 2022 looking to build on his 2021 campaign, which saw him add that Giro win to two stages and an overall win at the Tour of Utah in the past. A decent season was how he described the year, but the two standout results from the Giro and Vuelta will surely give him confidence going forward to a team which he has only heard positive things about in the past.

“Overall, I’d say it was a pretty decent season for me. It took me quite some time to recover from that Giro crash. I suppose you’d call it a mild concussion. I felt out of sorts on the bike and wasn’t really firing on all cylinders for a while,” he said.

“But then luckily I had a chance to do the Vuelta. It was another nice opportunity and again, a lot of my role there was helping other riders on the team but, like you say, I came close to winning the stage to Picon Blanco. It’s something to build on for next year, for sure.

“I suppose seeing Astana from the outside ever since I’ve been a rider, I’d always heard good things from people outside the team. You never really know how a team is until you get there, though they’re all kind of the same but different. I’d heard good things and I was in contact with [Alexandre] Vinokourov [team manager -ed.] and we spoke a bit about the team and I felt like it was a team I’d have nice opportunities in. I had the opportunity to come here and here I am.”