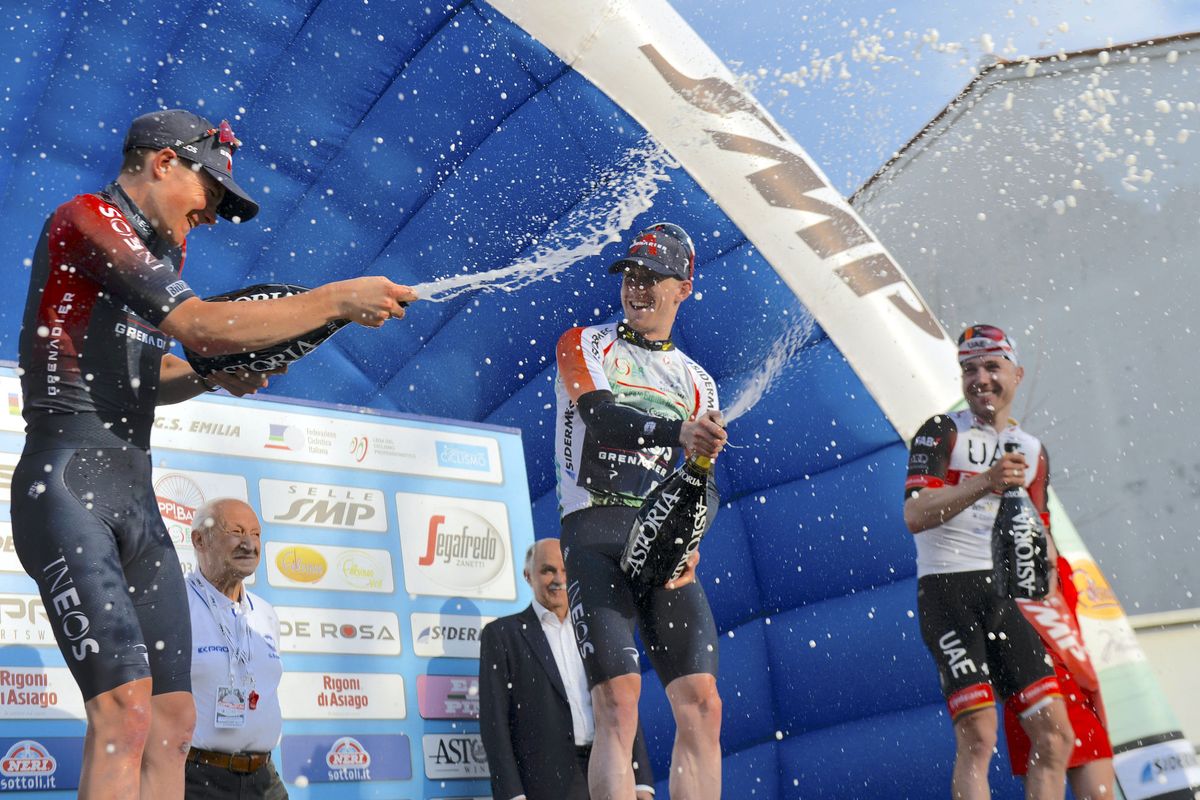 Eddie Dunbar (Ineos Grenadiers) stepped into the senior ranks a few years ago and quickly into top ten positions overall but the leap to the top step has been harder to come by, making the Irish rider’s victory at the five-stage Settimana Coppi e Bartali all the more meaningful.

Dunbar set his position near the top of the GC rankings on the very first stage of the Italian race, coming second in a two-up sprint with late-break companion Mauro Schmid (QuickStep-AlphaVinyl). Dunbar then stepped into the lead on stage 2, when he finished in the 17-strong front group.

Holding onto that lead position through the three remaining stages meant the 25-year-old not only claimed his first professional victory but also the first stage race win of the season for Ineos Grenadiers. Plus, teammate Ben Tulett also stood alongside him on the GC podium, making it a 1-2 for Ineos Grenadiers.

“The guys did a super job all week – they rode really well. We rode the stage today and controlled it from start to finish, it was great,” Dunbar said in a team statement. “I was grateful to all of the guys for believing in me and backing me these last few days to stick in there and it’s nice to finally get a win and show how grateful I am to them and all the staff too.

“We laid down the marker from day one to show we had a strong team and it was a super week for us and also for Ben – he got his first pro win and 2nd on GC. On the really tough days he was always there.”

The break took the victory on the final stage of the Italian race, with Josef Černy and Rémi Cavagna taking the top two stage sports for QuickStep-AlphaVinyl on the Cantagrillo finish line, while Dunbar and Tulett finished safely in the peloton to hold onto those top two positions on the General Classification.

Dunbar has been with the British team since late 2018, shifting over when Aqua Blue Sport folded. While racing with the Irish team he had secured fourth place at the 2018 Baloise Belgium Tour, and then in 2019 at Team Sky he made the move up to the overall podium at the Tour de Yorkshire. The solid GC efforts kept coming through the next two seasons, with sixth overall at the Tour de La Provence in 2020 and 12th at the Tour de Suisse in 2021, but it took till this week for the rider to push back to the podium and right to the top step.

“I’ve been on the team a few years now and everyone knows how much this means to me, it’s like a weight has been lifted off my shoulders,” said Dunbar. “I knew I could be up there in races, GC-wise and I said ‘once I get a good run I can be good enough to contest these races’. Everything fell into place this week and it’s a relief.”

Dunbar said he will now take a moment to enjoy the victory, but his sights will then turn to building on the week’s success.

“It’s important now for me to kick on from here, and keep progressing,” he told online outlet Cycling Pro Net after the race.