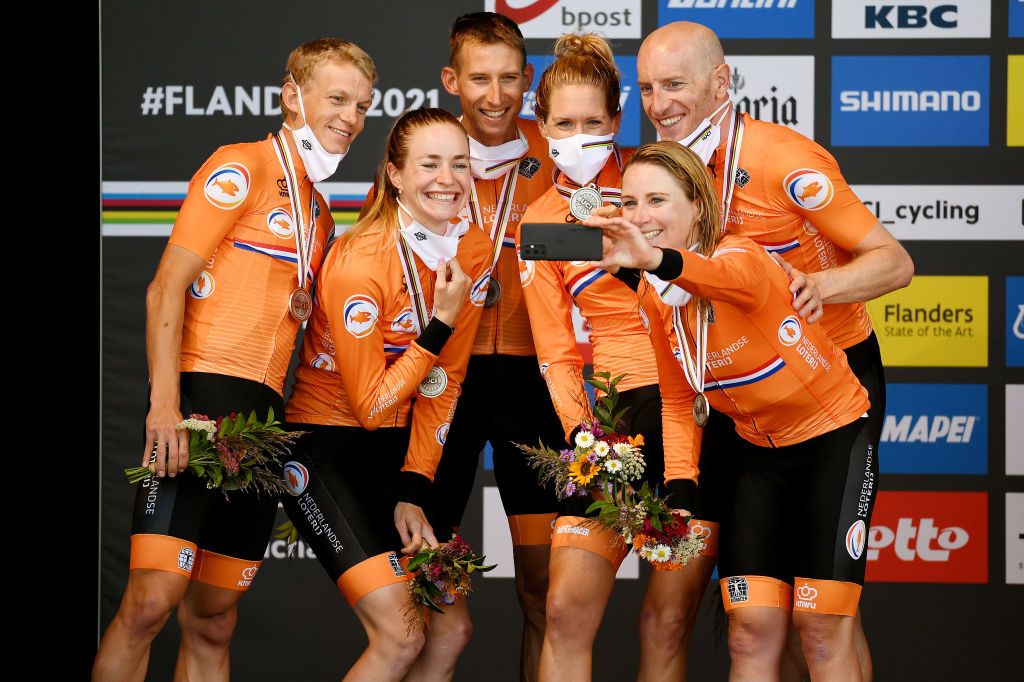 After sweeping to victory in the first-ever mixed relay team time trial at the UCI Road World Championships in Harrogate two years ago, the Dutch squad were among the favourites once again as riders took to the longer 44.5-kilometre course in Flanders on Wednesday.

Despite the additional firepower, though, the ‘oranje’ were unable to get the better of a German team motivated to deliver one final rainbow jersey to the retiring Tony Martin.

The men went out first, ceding 32 seconds to Italy by the end of their ride in Brugge, leaving the women some task to undertake on the second leg of the race. While they did jump past Belgium, Denmark, Great Britain, Italy, and Switzerland on the 22.5-kilometre leg, their efforts were 12.79 seconds short of another gold.

At the post-race press conference, with a silver medal around her neck to go with her bronze in the individual time trial, Van Vleuten was first to comment on the day’s events.

“For me, the main objective here was to put out a really nice team performance and also the fun we had racing together – that was the best,” she said. “Today we had to suffer together. We had three girls at the same level, so it was not so nice to wake up this morning and think ‘my god you’re going to smash each other’ but afterwards it’s nice and I like the team spirit.

“It’s quite a big difference [from a TTT] because you’re only with three so you don’t get a lot of recovery and it’s super hard and also quite short event. It was very painful.”

Van Dijk, who on Monday won her second individual time trial rainbow jersey after her first in 2013, said that she was happy to take silver, given the strength of the field, which she said had only increased with the mixed relay TTT coming after the individual time trial in the week, rather than before as it was in Harrogate.

“I’m really happy with the silver medal. I think we did great as a team,” she said. “We were pretty close. In the end, it was only 12 seconds, so I think we did a great performance. Of course, you want to win the gold, but I didn’t see the gold as a very realistic goal with this strong field.

“I think it’s a good move to have it after the individual time trial like this. You see all the big engines showed up today, so it was a good field, which makes it more interesting.”

Mollema, who came to the Worlds just four days after crashing heavily at the Tour de Luxembourg, said that the accident had an effect on his ride in the mixed relay TTT, but noted that he was improving day by day ahead of Sunday’s road race in Leuven.

“I really like this discipline,” he said. “I also did it two years ago in the Euros and the Worlds, and also both this year.

“Personally, I didn’t feel super today. Last week I had a pretty hard crash and was going better day by day. I wanted to do my best today and gave everything. That’s all I could do.”