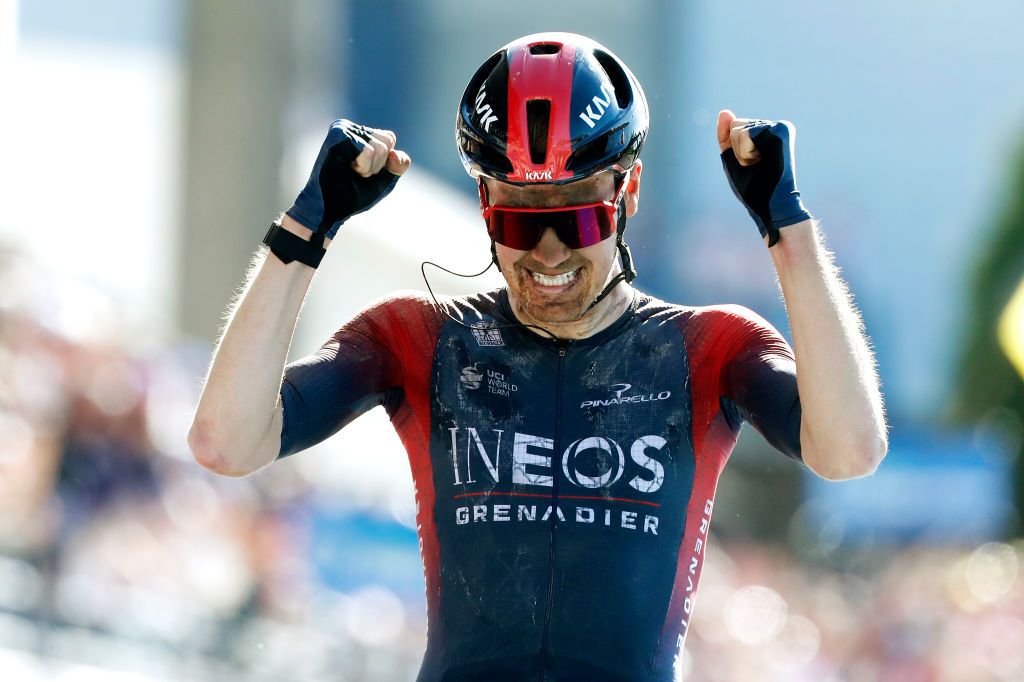 If there has been one stand-out team of the 2022 spring Classics season, then Ineos Grenadiers surely takes the title, having followed their victories at Amstel Gold Race and Brabantse Pijl with the one to crown them all, Paris-Roubaix on Sunday.

The title is the first of Paris-Roubaix’s famous cobblestone trophies claimed by the British squad since their foundation in 2010, with Dutchman Dylan van Baarle hoisting the famous prize aloft on the podium Sunday at the Vélodrome André Pétrieux.

Van Baarle, now a veteran of eight editions of the race, had never stepped on the podium of a Monument before, but can now add the biggest Classic of them all to a palmarès boosted two weeks ago by a second place at the Tour of Flanders.

The 29-year-old’s 2021 outing on the cobbles of northern France had ended with him finishing among the last ten riders, who made their way over the line outside the time limit at the wet race last October. His win this time out marks an extraordinary turnaround between two editions of the same race.

“Of course, I have never experienced to be the first guy on the velodrome,” Van Baarle said in the post-race press conference held in the neighbouring indoor Stab Velodrome.

“I know how it is to be the last guy. Last year I was out of time limit,” he added. “But this year I had goosebumps. I can’t describe in words what the feeling was. I tried to enjoy it as much as possible.”

Van Baarle’s decisive attack came on the four-star cobbled sector of the Camphin-en-Pévèle, 19km from the finish in Roubaix, having earlier bridged across to a lead group containing Matej Mohorič (Bahrain Victorious) and Yves Lampaert (QuickStep-AlphaVinyl) at Cysoing.

He extended his lead on the final five-star sector at the Carrefour de l’Arbre, pushing on alone in the final kilometres, despite Wout van Aert (Jumbo-Visma) and Stefan Küng (Groupama-FDJ) having bridged across to the chase group behind. Less than half an hour after his move, Van Baarle had captured the biggest win of his nine-year career.

“I just checked just to make sure I was alone, that they didn’t flick me, that there wasn’t still guys up the road,” Van Baarle said of the final moments of his race before entering the velodrome. “Now it’s super special, especially when the team car with Servais Knaven and Roger Hammond came next to me.

“That was super special, and I really started to believe it because with the communication, you know the gap a little bit, but you don’t get so much information. Yeah, you don’t want to celebrate too early.”

Van Baarle’s win marks the continuation of a sterling run of results sparked by a second place in last year’s road race at the Leuven World Championships. He said that the result was what he needed in order to fully believe in himself going forward, belief which put him not far short of a rare Flanders-Roubaix double.

“I think last year after the World Championships was for me a really important moment that I made the ‘click’,” he explained. “With the national coach Koos Moerenhout as well – he gave me so much confidence going into that race. He just kept believing in me.

“You can build on that the whole winter. To have confidence in those races that you really can race for the win and then, of course Flanders was confirmation that I was on the right path.

“After the Worlds he said that I just need to believe in myself more than I did before. Yeah, I listened to his words, and you see what happens.”

Van Baarle’s win at Roubaix comes days after Michał Kwiatkowski’s triumph at Amstel Gold Race and neo-pro Magnus Sheffield’s stunning win at Brabantse Pijl. Both men were part of the team again on Sunday, and the personnel out on the road wasn’t the only thing the victories had in common.

That would be the strength in depth that has emerged throughout the spring. Teenager Sheffield and fellow neo-pro Ben Turner have improved more and more as the weeks have passed, while another youngster, Tom Pidcock, has played a key role, as have the more experienced riders like Van Baarle, Kwiatkowski, and Luke Rowe.

‘The numbers game’ has been the catchphrase of Ineos riders in recent weeks, with multiple riders working together in the finals of Amstel Gold Race and Brabantse Pijl to deliver the wins. That was in evidence once again on Sunday, though from a much earlier stage than the last run to the line, as the team blew the peloton apart in the crosswinds just 47km into the race.

“We sat in the meeting and it’s all about ‘here is the first sector of cobbles and how do we enter into that sector?'” said team Head of Racing, Roger Hammond. “I just sat there thinking it’s quite a lot of racing to go before then, so let’s look a little bit earlier, so we just created tension to see what would happen, basically.

“That’s all we’ve done this year, just look for opportunities. If you don’t have the clear favourite, you’ve got to look elsewhere. There’s no point in riding to the Carrefour de l’Arbre and seeing who wins because we know that’s not going to work out too well. You might still win but it’s not to our advantage, is it?”

Ineos placed all seven men in the front group after the split, while the likes of Van Aert and Mathieu van der Poel (Alpecin-Fenix) were caught out behind.

“We could’ve had the team car in there as well, but we’re pretty happy with seven out of seven,” quipped Hammond.

The move, called by veteran Rowe, Dave Brailsford told Cycling News, might not have changed the ultimate outcome of the race, with the groups coming back together before the Arenberg Forest, but it did show Hammond’s thought process in action.

More evidence of the Ineos ‘numbers game’ came much later on in the race, as both Van Baarle and Turner made an elite front group, part of which would go on to contest the final, after Jumbo-Visma accelerated at Orchies.

“Basically, all the favourites started attacking and Ben Turner said to me that he was completely empty,” Van Baarle said of the race situation leading up to his attack.

“I asked him to just take a gel and try and go with the moves to make the pace really hard because I could feel that guys were tired. So yeah, that’s what he did.

“It was quite painful to come back to Lampaert and Mohorič. But then I could recover a little bit and then I could feel that I was the strongest. I thought that I just have to go before the Carrefour de l’Arbre. Then just hope for the best.”

The successes from Ineos’ approach to the Classics this season have so far been second to none, the process the result of a step change in the way the team has thought about the races, Hammond said.

“In the winter when it came to the team, they talked to me about changing things and changing philosophy,” he said. “They want to race and race ‘properly’. So, we had a bit more freedom to apply that. It’s a philosophy from day one really – let’s go out there and do some bike racing and that’s what they’re doing and enjoying it.

“Every single one of those riders believes in this way of racing. Then you can see the belief in it because they’ve all outperformed their expectations.”

For Brailsford, the momentum gained throughout the Classics, with the team working together race after race and improving their processes and tactics, and gaining experience, has also contributed to their achievements.

“At all of the Classics this year, we’ve built momentum really,” he said. “I think once we get that belief, and then we get more willing to race and the more willing you are to race and take the risk, the more results you get. It’s self-fulfilling in a way.

“Not to have Paris-Roubaix on your palmarès somewhere would be a terrible shame,” he added, referring to the team’s long drought in the race. “We never achieved it, so when you do achieve it’s one of those races that you dream up as a kid.

“Coming up with this is just the stuff of dreams really.”