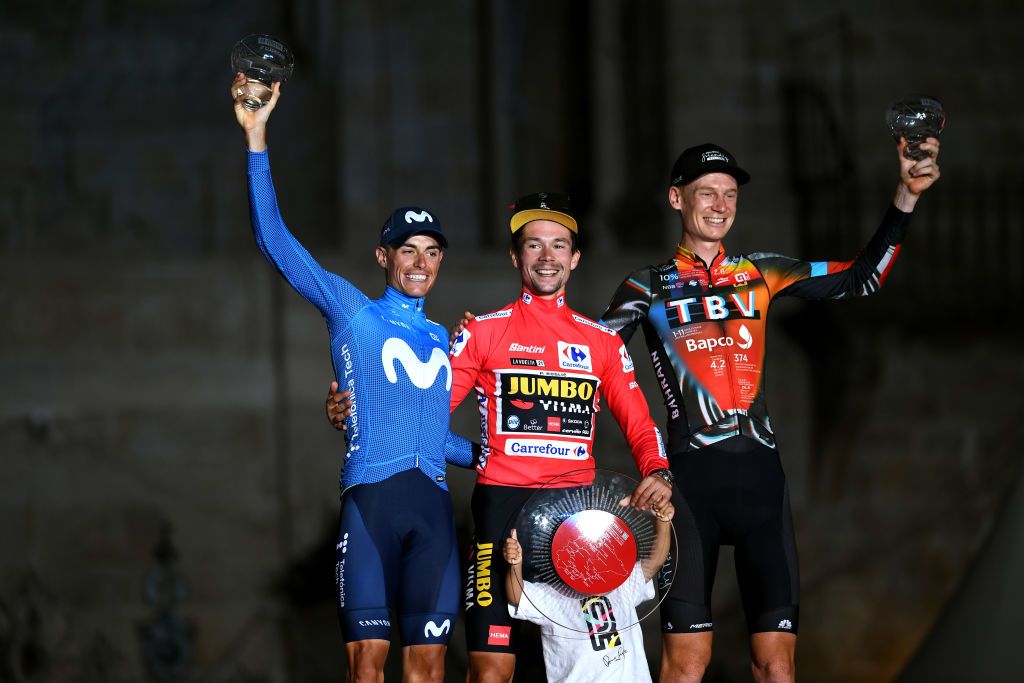 Enric Mas (Movistar) says he will leave the 2021 Vuelta a España feeling that he should be more than content with his repeat second place in the Spanish Grand Tour and his team’s first Vuelta podium finish since Alejandro Valverde in 2019.

Fifth and the winner of the best young rider classification in 2020, the Mallorca racer is back on the Vuelta’s final podium after taking a breakthrough runner-up spot behind Simon Yates in the 2018 edition.

Mas’ late attack on the Velefique stage at the end of the first week gave the Movistar racer the boost he was needing to strengthen his claim on the second place overall.

Although he crossed swords with Primož Roglič (Jumbo-Visma) at the summit finish of Valdepeñas de Jaen and launched a brief move on the Lagos de Covadonga after  Roglic had gone clear, Mas was essentially in a fight to conserve his second place.

Mas said he had had a tough time in the Vuelta a España’s third week after his crash on Tuesday. It was only on Saturday, when he followed Adam Yates (ineos-Grenadiers) and Roglic up the road, that he felt he was over his injuries incurred in his fall.

“We have to be very happy,” Mas told Spanish television RTVE. “Finally there are only four of us here in the team and three of our teammates have ended up in hospital after fighting tooth and nail for us, and that is what matters.

“We’re heading out with this podium finish and we can be proud of that for the team. I want to thank the riders and the staff. They’ve all counted when it comes to this result.”

Mas recounted that Saturday was the first day that he felt he was “really back in shape” after falling last Tuesday early on the stage. However, he was still feeling the effects in Sunday’s concluding time trial.

“Today was a very hard time trial, again because of those injuries I had in Cantabria, I suffered at the end of it all.

“I don’t know if you could see on TV, but I couldn’t really get into my time trial position on the climbs and I had to go flat out, but holding onto the lower part of the bars, as if it was a normal bike and a normal climb.”

Mas was caught by Roglič almost within sight of the finishing gantries, and he concluded the stage in ninth place, 2:04 down. Overall he was nearly five minutes down on Roglic, although he had a margin of 2:58 on third placed Jack Haig (Bahrain Victorious).

“Just as well I didn’t have to fight for the triumph for the Vuelta with Primoz in the time trial, because he would have won hands down,” Mas said.

“What is true, beyond the time trials, is that yesterday [Saturday] when I got to the hotel I asked my trainer that what I had to do to improve my performances on the stages where Roglič always got a few seconds on me and they were seconds that I should not cede.”

As for whether he could be more ambitious in the future, Mas said: “For sure. I have to work hard to fight for these seconds that I’ve lost at times.”

If that would allow him to come closer to Roglič and Tadej Pogačar (UAE Emirates), he said “They’re reference points and we have to be aware that on a time trial like today, he did a great performance. But that’s no reason to feel uncomfortable and worried, we just have to work on things.”

Mas was much more reserved when asked about his teammate Miguel Angel López’s controversial exit the previous day, saying: “That is an internal matter for the team. I think he put out a statement yesterday. It’s nothing to do with me.”

As for what his objectives will be from hereon, Mas said: “First of all, have a good dinner with the team, enjoy it all, celebrate and then start thinking about what’s left of the season. I’m in good shape, and I’d like to have a go at the Italian Classics, which are very special races.”