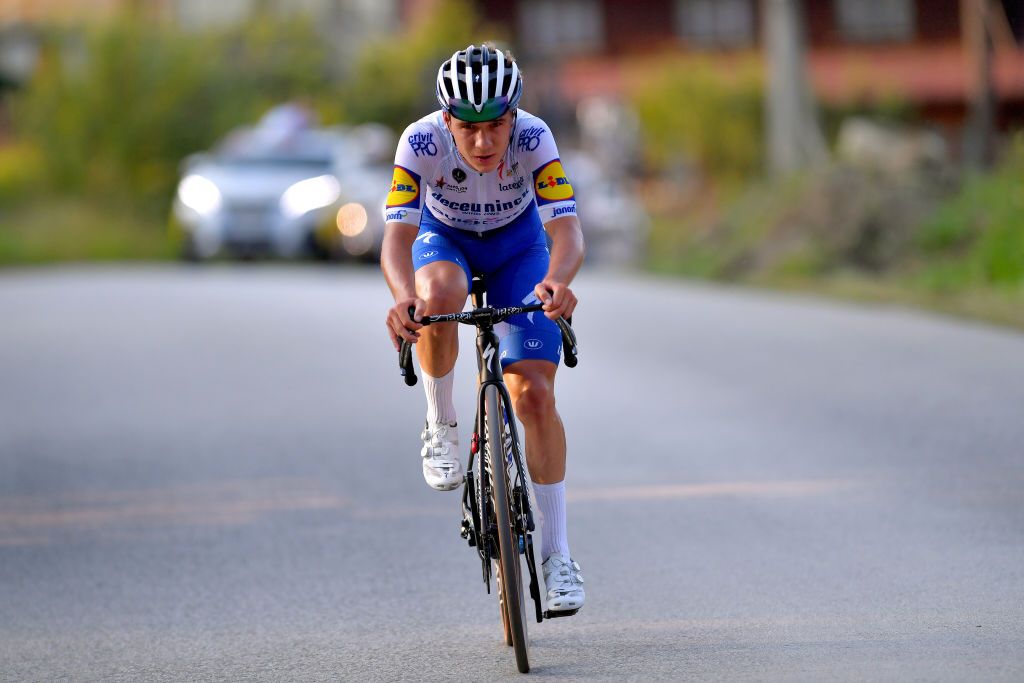 Remco Evenepoel’s path to the Giro d’Italia has been highly unconventional, to say the least. The 21-year-old has not raced in eight and half months when he crashed during Il Lombardia and fractured his pelvis and, rather than rush his fitness to tackle a few lower-level races, he spent the spring preparing with two lengthy altitude camps. How will the formula work for the Deceuninck-Quickstep rider’s first Grand Tour? “You’ll have to see it on the TV,” Evenepoel says.

“It’s going to be weird the first days. But yeah, you know, we are all professional cyclists. So this is our job and the difficult days, you have to take them and you have to get on with them.

“I think you cannot prepare 100 per cent for a race without racing. But that is the risk that we took,” Evenepoel said in a virtual press conference on Wednesday. “I’m just happy to be at the start finally, again, almost ten months (sic) after the crash. My goal here is just to feel well in the bunch again and to have a lot of fun together with you guys because I’ve missed racing for too long.”

Evenepoel rocketed to the top of professional cycling in his first years in the WorldTour with Patrick Lefevere’s team – he was the best young rider and ninth overall at the Vuelta a San Juan, won his first stage race at the Belgium Tour and his first WorldTour race at the Clasica San Sebastian and won the European time trial title and silver at Worlds all in his neo-pro year. In the 2020 COVID-19-hit season, he went even better, winning Vuelta a San Juan, Volta ao Algarve, Vuelta a Burgos and Tour de Pologne all either through superior time trialling or long-range solo attacks.

As he prepares to start the Giro d’Italia on May 8 it’s easy to forget that Evenepoel has never endured a three-week stage race, much less entered into one after an eight-month break from racing and a serious injury. He’s sharing leadership with last year’s pink jersey holder João Almeida, 22, who has already shown form with three stage race top 10s.

He was due to race the Giro last season before being injured, and Evenepoel says it feels good to finally be starting his first Grand Tour.

“It also feels really good to be in this team, which had great success last year with João and also the other guys who did really amazing work.”

Evenepoel watched last year’s race from a hospital bed but this year, he says, he hasn’t had much time to watch his teammates’ exploits because of the intensity of his training. “In the last couple of weeks and months, I had to work really hard to get back into the best shape possible,” he said.

“The first time getting out of the bed was really, really painful … it was the most painful moments in my life so far, or maybe the crash was also.”

After his ordeal, Evenepoel says his main focus for the Giro d’Italia is to just enjoy racing. “Ten months without racing really can make you sad. I mean, you are close to depression. So I just want to enjoy it together with you guys have fun on the bike. And hopefully, we can make some great memories together. No matter if we have good results or you know, just make the best out of the race and enjoy our time together.”

At just 8.6km in length, the opening time trial will be a shock to his system and Evenepoel says he’s ready to go all out – but expects world champion Filippo Ganna (Ineos Grenadiers) to be a tough man to beat.

“It’s going to be a painful first race day with a time trial,” he said. “I mean, I like to do a time trial, I train quite a lot on the time trial bike. I’m just going to go full gas for nine kilometres and then we’ll see. Because if you have the world champion at the start it’s always hard to beat that guy.”

There are also two tough stages in the first week – stage 4 finishing just after the Colle Passerino, stage 6 to San Giacomo, the Guardia Sanframondi on stage 8 and Campo Felice summit finish on stage 9 all coming before the first rest day. There will be no easing into the race.

“I’m not worrying about those early mountain top finishes for now. I don’t know how the body will react. I mean, I have no pressure. The main goal of this season is the Olympics and I always said that the Giro will the road to Tokyo. We will see how the body reacts – it has been too long to say if feel I’m better than last year or I am feeling more confident or whatever. So we’ll see day by day.”

Evenepoel had a two-week training camp in January but had to take three weeks off because of lingering pain near his injury. He was cleared to resume training in February and spent three weeks in the Sierra Nevadas at altitude.

The extra time off made it so there was no time to schedule in preparation races before the Giro. “We just didn’t hurry, there was no need to rush. Three months [of preparation] towards a race is quite a long time.”

Whether he will have enough in his legs to last through a tough third week with multiple days of racing at altitudes over 2,000m, Evenepoel says, “you will have to watch the TV for this. I didn’t race above 2,000 metres. I trained a lot above 2,000 together with João as well, but training and racing above 2,000 – I cannot talk about is when you will have to see in almost three weeks.”

One stage that Evenepoel was concerned about enough to recon was stage 11 to Montalcino which has four long sectors of gravel. It was the only stage he and Almeida previewed.

“Yesterday we did the recon together, me and João, and we were quite happy with the course. I mean, it’s 35k of off-roads, but we feel quite confident. Most of the sectors are uphill, so it suits us very well – it’s going to be quite a hard stage. We think that this stage can also be quite important for GC.”

For the other stages, they will rely on previous knowledge from team camps or racing and will preview the time trial courses the morning of the stage.