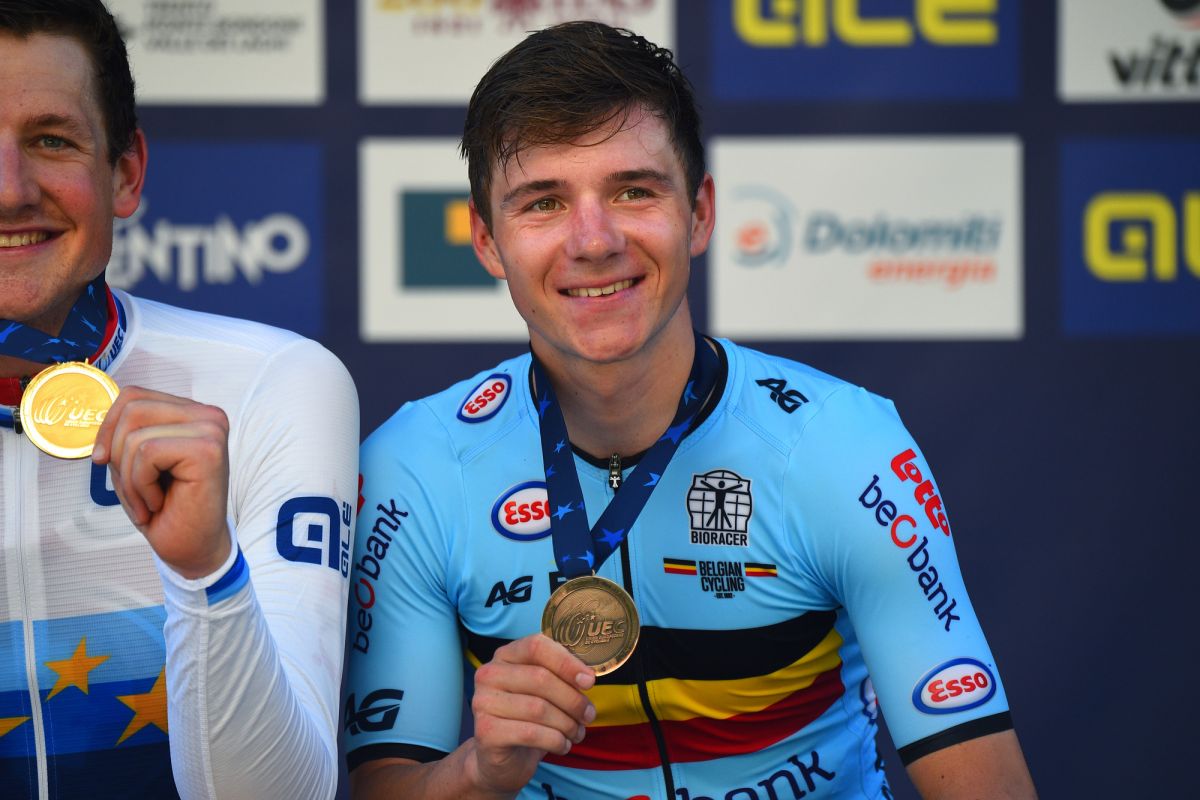 Remco Evenepoel made it onto the podium in the individual time trial at the UEC Road European Championships and, while it may not have been the sought after top step, following a rollercoaster run in to the event the Belgian was satisfied to be back among the world’s best.

Stefan Küng (Switzerland) was the fastest in Trento on the mostly flat 22.4km course, finishing eight seconds ahead of Filippo Ganna (Italy) and 15 ahead of Evenepoel (Belgium), who won the title in 2019.

“It wasn’t a parcours that suit me, as I prefer longer time trials, but it’s no shame to lose against those two guys, I knew they were the men to beat today and were really strong,” Evenepoel said in a media statement put out by Deceuninck-QuickStep. “The route favoured the heavier guys, especially with that headwind in the second part, but I did my best and gave everything for a good result.”

Evenepoel came into the European Championships after having abandoned the Benelux Tour last week with stomach problems but apart from that he has had a successful streak since the Tokyo Olympic Games, winning the Tour of Denmark, Druivenkoers-Overijse and the Brussels Cycling Classic. Tokyo, however, certainly didn’t go as planned.

Evenepoel came 49th in the Olympic road race after attacking early and then being dropped, leaving Belgian teammate Wout van Aert alone for the finale. It later emerged that the 21 year old had gone against team tactics. Then in the time trial Evenepoel came ninth.

The rider said he had a hard time physically and mentally after the Olympics and hadn’t known if he could be on form again this season or if he would even end up being able to race the European and World Championships. However, having made it to the start line in Trento, Evenpoel said securing a medal in the time trial was an encouraging step in the right direction.

“I’m very happy to be again among the best in the world in this discipline after a ride that will give me more confidence for my next goals,” said Evenepoel.

Having committed to following team tactics, Evenepoel has also been included in the Belgian team for the Road World Championships in Flanders. He will be riding the elite men’s time trial on September 19 and road race on September 26, in the service of team leader Van Aert. Before then, though, he has the European Championships road race on Sunday.

The 172.9 kilometre course has an opening 73km loop through the Valle dei Laghi and onto the climb of the iconic Monte Bondone before it heads into eight laps of a circuit around Trento. That 13.2km circuit includes the 3.6km long Povio climb and a 250 metre elevation gain per lap, though the final four kilometres are on flat roads.