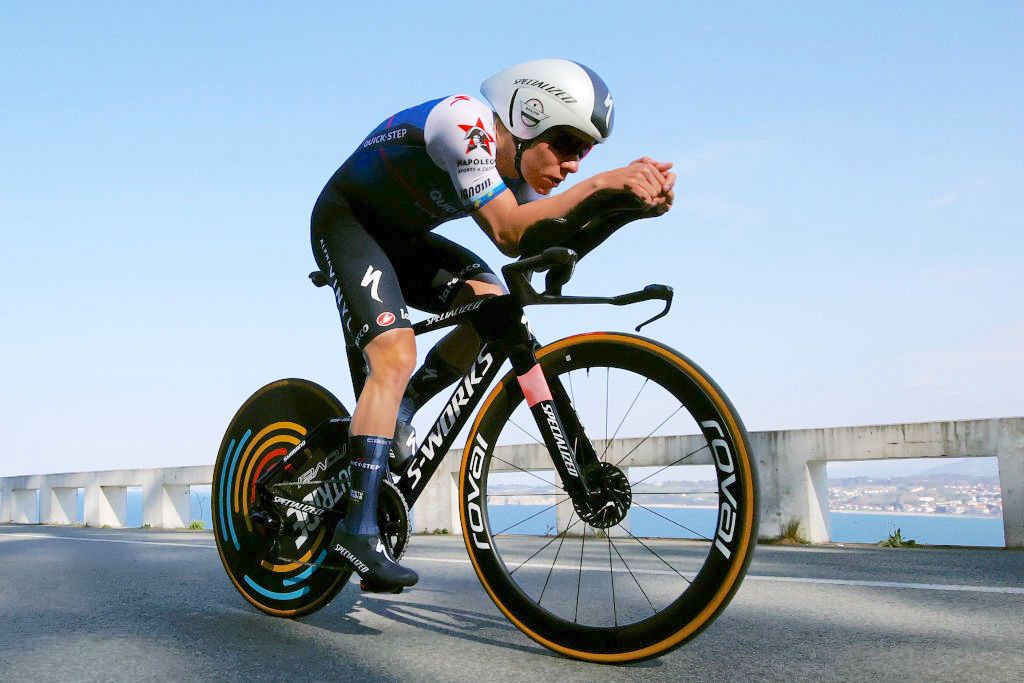 At the opening day of Itzulia Basque Country, Remco Evenepoel started April as he had started March – taking the runner-up spot in the opening time trial at a WorldTour stage race.

Last month, it was Filippo Ganna (Ineos Grenadiers) who beat Evenepoel at Tirreno-Adriatico, while Monday saw the Belgian take second place behind Primož Roglič (Jumbo-Visma) in the 7.5km opener at Itzulia.

Evenepoel, once again, heads into the race among the overall favourites, and, once again, will have to do battle with a Slovenian GC megastar. The race’s first stage, which took in hills, technical descents, and a cobbled run through the town of Hondarribia to finish, saw Evenepoel shed five seconds to Roglič, though put him a yawning 13 seconds ahead of any other GC contenders.

“I think I couldn’t do anything else,” Evenepoel said after the finish. “The time trial was quite short, technical, and a bit dangerous so if you wanted to make a good result you had to take risks. You needed a lot of balls to take risks.

“He won three times the Vuelta,” he added, referring to Roglič. “So I think together with Tadej [Pogačar] he’s the best GC rider in the world. He’s a big idol and I’m looking up to him but that doesn’t mean I’m not a bit disappointed to be second today.”

Evenepoel, who was 152nd out of 156 riders to start, had blitzed the first checkpoint during his ride, passing through at the top of the San Telmo climb 11 seconds quicker than Adam Yates (Ineos Grenadiers) and his QuickStep-AlphaVinyl teammate, provisional leader Rémi Cavagna.

He came to the finish holding that 11-second gap, albeit diminished by a few fractions of a second. Roglič, the last man out, went through the 3.15km checkpoint just over half a second down but had a better run down the descent, over the smaller ramps to come, and into Hondarribia to put five seconds into his rival.

“I just did it as fast as I could and I think Primož took the most advantage in the last cobbled climb,” Evenepoel said. “I think he took a lot of seconds there. What can I do?

“It’s the second time I’m second in a WorldTour first-day time trial. It’s a bit sad to come second again but I think I’m in better shape now than I was in Tirreno, so I’ll fight every day to do my best.”

Despite the similarities to the opening day of Tirreno-Adriatico, where Evenepoel eventually faded to 11th on the queen stage over Monte Carpegna, he said that he’s in better shape than he was at last month’s race.

“My shape is better than it was in Tirreno and I think mentally I’m stronger as well,” he said. “I hope that every day I can fight with Primož and all the others because it’s going to be a big fight until Saturday.

“I’m going to take it day by day and see. Tomorrow I could have a bad day already and lose a lot of time. We’ll speak on Saturday and see how it was.”