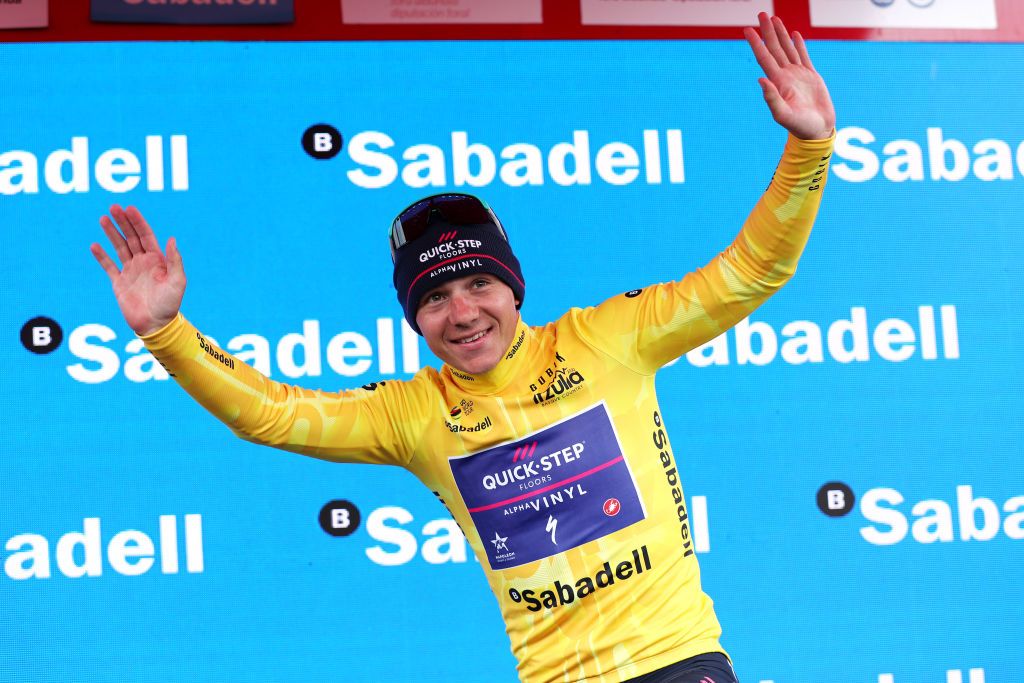 After hovering in second place overall at the Itzulia Basque Country just five seconds behind Primož Roglič, Remco Evenepoel finally ended the Jumbo-Visma rider’s time in the yellow leader’s jersey with a stinging attack on the Karabieta climb with 15km to go. But after a painfully-steep and rain-slicked ascent to the finish in Mallabia he finds himself in an even more precarious position, with Ineos Grenadiers’ Dani Martinez just two seconds behind him in the general classification.

“I’m proud to finally be up there with the big guns,” Evenepoel said in a post-stage interview with CyclingPro.net. “I’ve been looking for this shape and this level for a long time. In Tirreno, I was still not there. I felt really good and really strong, and when the team supports you it’s very nice. This area suits me very well, with shorter steeper climbs, although today was quite a long time in the final.

“I’m proud to be in the jersey in the Basque Country. The goal was to do a nice GC and now we’re leading it with one day to go.”

Evenepoel said he specifically chose the shallower gradients on the stair-stepped Karabieta to attack, at a moment when his rivals thought they could take time to recover.

“The attack was hard, fast. I think it was a good moment because when everybody thinks there is a plateau on a climb they want to recover but I wanted to keep the pace really high,” Evenepoel said. “That’s where I wanted to make my move, we discussed it before the race. There was quite a valley to come to the finish, and Roglič was dropped, Yates was dropped, the guys who looked the strongest in the first days. I think today the strongest were in front.”

Evenepoel drove the group of eight riders behind solo leader Carlos Rodríguez (Ineos Grenadiers), who held on to win the stage, putting Roglič and Adam Yates (Ineos Grenadiers) almost completely out of the GC picture, with the gap yawning to 1:30 before the Yates group clawed it back to a minute. Roglič, however, lost contact and finished a few seconds further back.

In the slick uphill sprint to the line, Evenepoel said he was held up by a crash from Aleksandr Vlasov (Bora-Hansgrohe) and Roglič’s teammate Jonas Vingegaard. He came across the line two seconds behind Martinez, and was a six-second advantage over the Colombian overnight was reduced again by the time bonuses to a pair of seconds heading into a wickedly difficult final stage.

“The final was really hectic, maybe it was a little over the limit with the rain because it was not a proper sprint anymore. With 75 metres to go, I slipped and lost position. Then the guys in front of me crashed, that’s why Martinez took a little time.

“That’s life, Spain and rain is never a good combination. That’s what we saw today, in the final luckily and not the whole stage. I’m speechless to be wearing the yellow jersey in the hardest one-week WorldTour race in the season.”

At 135.7 kilometres, the final stage from Eibar to Arrate is short but it will be flat-out from the gun. There are seven classified climbs, with the category 1 Azurki crested after only 52.4km of racing, and the devilishly steep Krabelin (4.1km averaging 10.5 per cent) coming with 41km to go. The riders ascend another category 1 climb, the Usartz (4.5km at 8.8 per cent) just before the finish.

Evenepoel hopes a breakaway can go but is expecting the final stage to be a tough one.

“They say attack is the best defence but I expect a big battle with Martinez and with Ineos, they’ll probably put all in for him. For me, the breakaway can go, that would be very nice, and behind a big fight for the yellow jersey. If it comes to a sprint it will be very different from today. I just have to be on the right wheel.”

If Evenepoel succeeds in fending off the challenge from Martinez and the block of nine riders within 90 seconds of him, including Ion Izagirre (Cofidis), Vlasov, Pello Bilbao (Bahrain Victorious), Vingegaard, Enric Mas (Movistar), Roglič and Yates, he will win only his second WorldTour stage race after his 2020 Tour de Pologne victory, and his first since breaking his hip in a horror crash at Il Lombardia that same year.