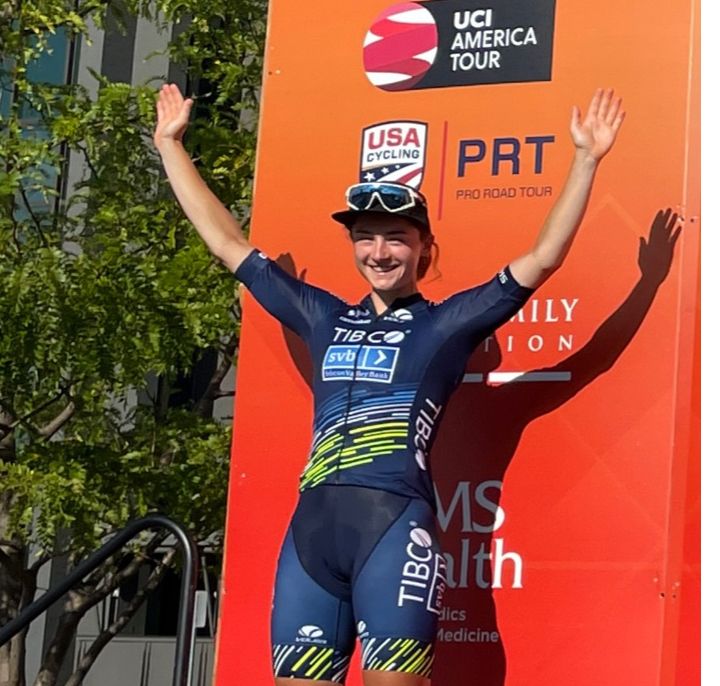 Veronica Ewers’ fairy-tale progress as an elite rider at WorldTour level continued at the Women’s Tour, with the 27-year-old taking a top-10 placing in the individual time trial and finishing 34th overall.

The event was Ewers’ maiden stage race at WorldTour level but came on the back of her fifth place in the Tour Cycliste Féminin International de l’Ardèche in September.

Ewers, a former runner and soccer player, shot to prominence earlier this year when she took a surprise third in the women’s elite road race at the US National Championships before finishing second in the Joe Martin Stage race.

On board with Tibco-Silicon Valley Bank for the next two years, the American rider has a bright future and head sports director Rachel Hedderman is excited about what’s to come.

“I’m really happy with how she’s doing. It’s obviously different to racing in the US so we’ve really thrown her in the deep, and a few days ago some said it was like chucking her in with lead boots on. She’s doing really well and I’m really excited for her.”

Ewers’ main priority in Europe been centered around building experience but, as Hedderman added, she doesn’t exactly have a vault of racing days under her belt when it comes to domestic outings, either.

Tibco will afford Ewers room to develop as a rider as she gains more experience both in the US and Europe but the team’s strategy on drafting talent over the last few years has turned up a number of exciting prospects.

According to Hedderman, the team were impressed with far more than just Ewers’ nationals performance before bringing her onto the team.

“We noticed her in Nationals but she’s been riding for Jennifer Wheeler’s team, and she rode for Tibco a few years ago. She set up a really good club and then an elite team and did a lot of work developing riders. Linda Jackson, our team owner, has kept in contact with her. You see a one-off result and it sparks interest but then being able to talk to someone who knows the rider in order to get more information from someone we trust gives us real confidence.”

Hedderman wouldn’t be drawn on the type of rider Ewers could develop into over the coming years. Like Ewers, Hedderman entered the top-level of the sport in her mid-20s and the director believes that both time and patience are required as both the team and the rider progress in tandem.

“It really does feel untapped. She was fifth in Ardèche and then top-10 in the TT here, so even within the US it’s not like she’s been racing for years. She’s a relatively new rider. I’m pretty excited for her,” Hedderman said.

“When you have a rider as new as her you don’t want to pigeonhole them because you just don’t know. Let’s throw them into as many different types of races and situations as possible and then see where they can get to. When someone is not established yet, let’s not constrain them. Let’s give them the opportunities and then see their talent takes them.”