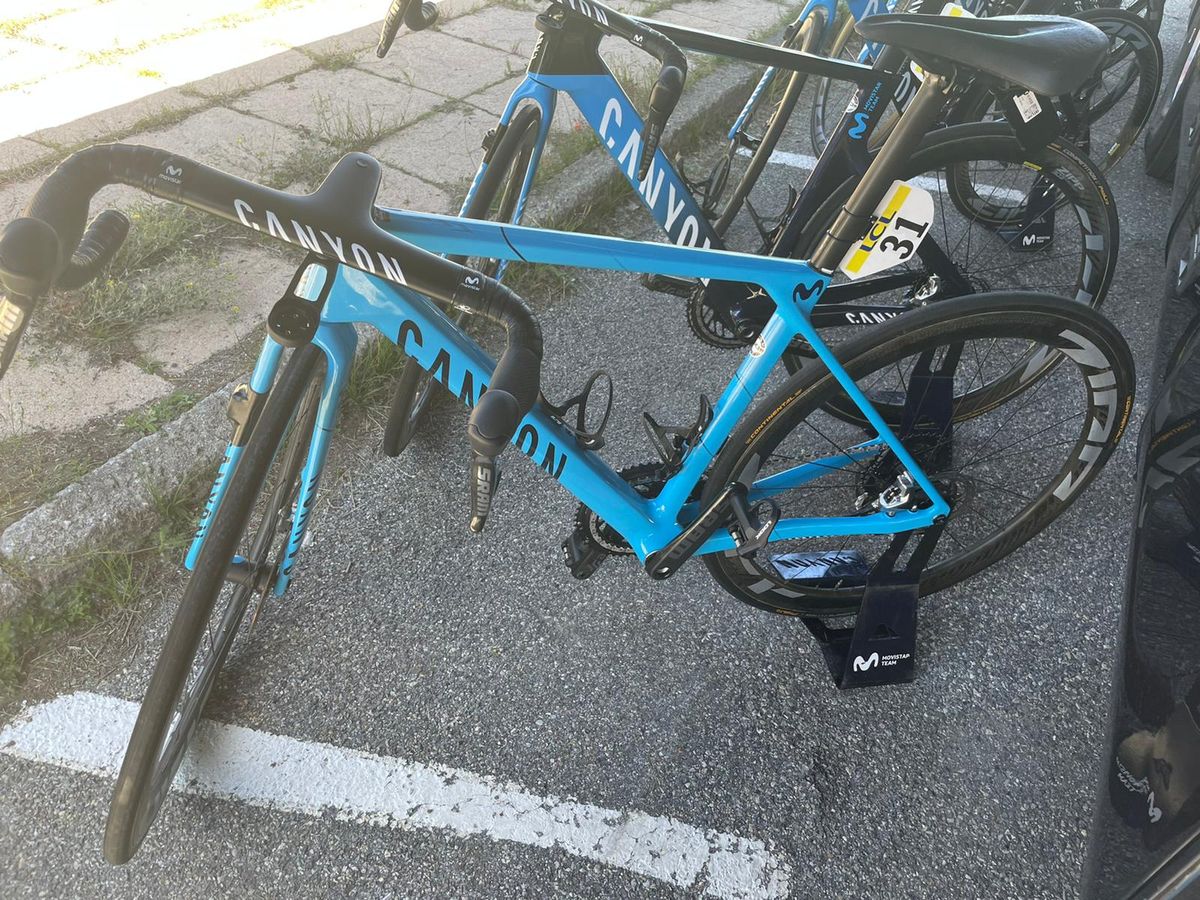 An all-new Canyon Ultimate CFR has been spotted at the Movistar team bus at the Critérium du Dauphiné.

To be ridden by Enric Mas during today’s mountain stage, the Ultimate is Canyon’s lightweight climbing bike, sitting alongside the heavier, more aerodynamic Aeroad, and the more comfortable Endurace in the range.

The sighting comes just days after a wild-looking new Trek Madone was also spotted at the same race. Compared to its prior incarnation, that bike saw a total overhaul and redesign with a radical seatpost design that included a hole in the seat tube. The Canyon Ultimate seen here sees changes that are much more subtle.

The big news is that Canyon appears to have copied what it did with the Aeroad, by integrating a quill-style stem, built into the design of the integrated aero cockpit. In addition, the cockpit appears to have the same width-adjustment available, made available by separating the stem and tops from the hoods and drops. Like the Aeroad, the outer portions of the handlebars can slide in and out to three different settings (or removed entirely) to transition between three preset widths. It’s unclear which setting Mas’s bike is set to.

Other changes appear at the seatpost and seat tube area. Where previously the seat tube was cut slightly to follow the curve of the rear wheel, this is no longer the case. The seat tube in this case appears to be straight from the bottom bracket to the top tube. The gap to the rear wheel also seems slightly greater, which would suggest the seat tube is either positioned further forward, or the chainstays are longer. Either way, the likely result is greater tyre clearance than the 32mm offered before.

Separately, the new Ultimate appears to be fitted with a D-shaped seatpost, whereas the previous model was fitted with the rounded Canyon S13 VCLS CF post.

The dropped seat stays remain the same as before, along with a compensation triangle in front of this junction, which also houses the seatpost clamp. Meanwhile, the ‘CFR’ branding atop the top tube confirms that this is the brand’s highest spec of carbon fibre.

Elsewhere, a slight edge can be seen on the crown of the fork as it angles downwards. The reasons for this are uncertain. It could be an aerodynamic play, or perhaps resulting from the widening of the fork to allow wider tyres. Looking at the image of the tyre clearance below, our guess is on the latter.