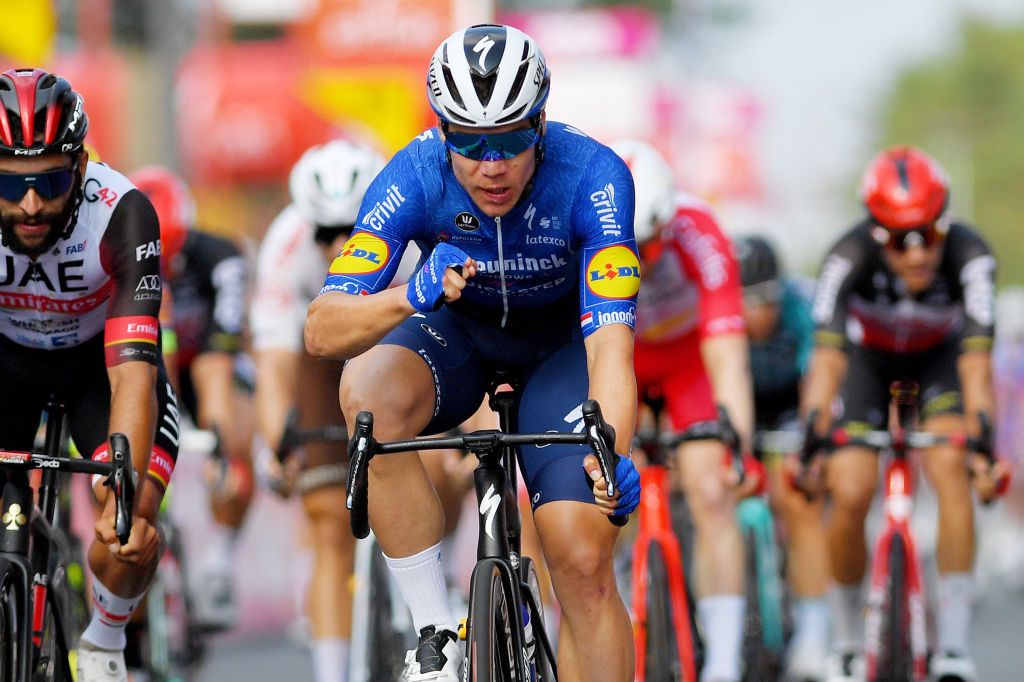 Fabio Jakobsen (Deceuninck-Quickstep) has taken his first victory since suffering devastating injuries in a crash during the 2020 Tour de Pologne.

The Dutchman out-paced Fernando Gaviria (UAE Team Emirates) and Amaury Capiot (Arkéa-Samsic) on the Circuit Zolder to win a shortened stage 2 of the Tour de Wallonie.

“I think it means the end of my rehabilitation. I guess I can say I’m back,” Jakobsen said on the podium.

“I look forward to winning more stages. For today, cheers.”

Jakobsen, 24, suffered life-threatening injuries to his face and neck on the opening stage of the Tour de Pologne nearly one year ago after sprint rival Dylan Groenewegen (Jumbo-Visma) deviated from his line and elbowed him into the barriers.

The barricades, which many riders described as ill-suited to the task of a high-speed collision, collapsed as Jakobsen fell, and whipped around into the course, bringing down a number of riders.

The force of the impact with the metal barriers left Jakobsen with a severe head injury, serious damage to his soft palate and jaw, and the loss of most of his teeth. He underwent numerous surgeries and a lengthy rehabilitation before returning to riding ahead of the Deceuninck-QuickStep pre-season camp in December.

Jakobsen made his return to racing in April at the Tour of Turkey before taking part in the Volta ao Algarve and Critérium du Dauphiné.

His victory in the Tour de Wallonie, he said, was a relief.

“It’s been quite a long comeback and to stand here today after that crash is an emotional moment for me, especially as my family is also here and they could see me do what I love so much and take the victory.

“These last couple of months have been a process where I made step after step, faced some setbacks at times, but continued fighting and believing in myself. I had already won several times before today, but being able to sprint and get the win is a big relief for me,” Jakobsen said.

“I need to thank a lot of people: my girlfriend, my family, the doctors and the team – without them it wouldn’t have been possible. This is also their victory. I am so happy I am in this team and will be part of it in the future. Together we worked on my comeback and it panned out well.”

Groenewegen, who also crashed in the same incident last year and fractured his collarbone, was sanctioned for the incident and only returned to racing at the Giro d’Italia this year. Groenewegen also claimed his first victory since the Tour de Pologne crash at the Tour de Wallonie, on the opening stage 24 hours previously.

The planned 184km stage 2 from Verviers to Herve was shortened due to devastating floods that have swept through the Netherlands, Belgium and Germany this week. The riders instead contested a 120km stage on the Circuit Zolder motorsport track.