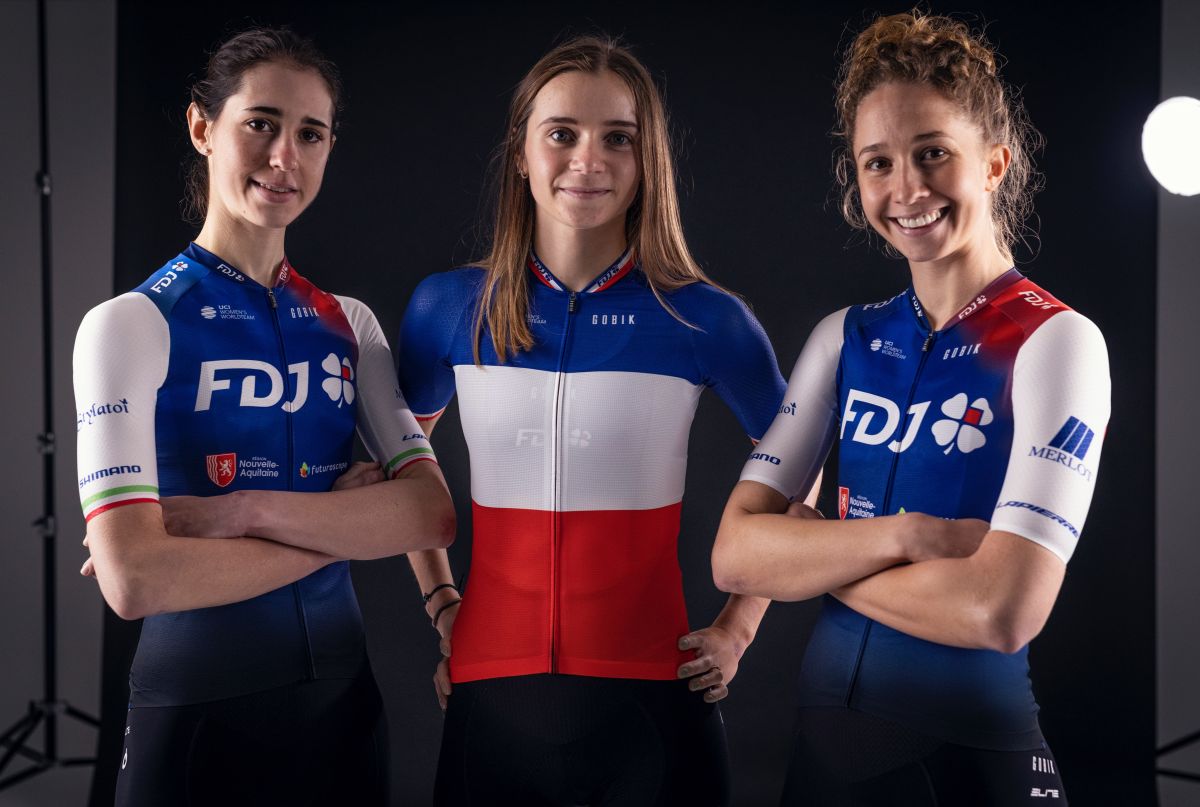 FDJ Nouvelle-Aquitaine Futuroscope have unveiled a new look for 2022, switching from a predominantly white look to a dark blue, red and white kit.

The French squad, which enters its 17th year in the women’s peloton, has made a change in kit supplier for the new year and welcoming Gobik on board after the end of their partnership with Poli.

A three-year deal with the Spanish brand has brought a revamped kit design. Dark blue is the main colour to adorn the jersey, which also includes white sleeves and a fade into a splash of red on the left shoulder.

Lead sponsor FDJ, the French national lottery, remains as main sponsor across the front of the jersey, with the south-western French region of Nouvelle-Aquitaine and the Futuroscope theme park also taking their usual places on the front. The logos of Gobik, bike supplier Lapierre, and component sponsor Shimano also feature.

The kit was modelled by the team’s star rider, Dane Cecilie Uttrup Ludwig, as well as former Italian road champion Marta Cavalli and reigning French road champion Evita Music. As is tradition with FDJ’s women’s and men’s teams, the French national jersey is sponsor-free, save for Gobik’s logo.

“We are starting a new phase in the history of our structure, we want to write with Gobik this new page of our history, especially in terms of aerodynamics and performance, as this field has become more and more important in recent years,” said general manager Stéphen Delcourt.

“The resources, know-how and experience of Gobik are very promising here and we are very much looking forward to working together. The new design respects both our history and our passion for the tricolour flag, but also our desire to become a reference team in terms of innovation, performance and image.”

FDJ Nouvelle-Aquitaine Futuroscope will take part in their third season in the Women’s WorldTour this year as the division expands from nine to 14 teams in 2022. The team’s home race, the newly established Tour de France Femmes, looks set to be a major goal for the squad this summer.

Australian Grace Brown, who enjoyed a breakthrough season in 2021 with consistent riding throughout the year, including a win at the Classic Brugge-De Panne, a stage of the Vuelta a Burgos, and third at the Tour of Flanders, is the major new addition to the squad for the upcoming year.

The 29-year-old is joined on the incoming list by U23 European time trial champion Vitoria Guazzini as the team expands to a 14-rider roster. Lauren Kitchen, who retired back in May, is the only rider who does not remain from the 2021 squad.

See more
SOURCE: CyclingNews   (go to source)
AUTHOR: Daniel Ostanek
All copyrights for this article, including images, are reserved to the original source and/or creator(s).