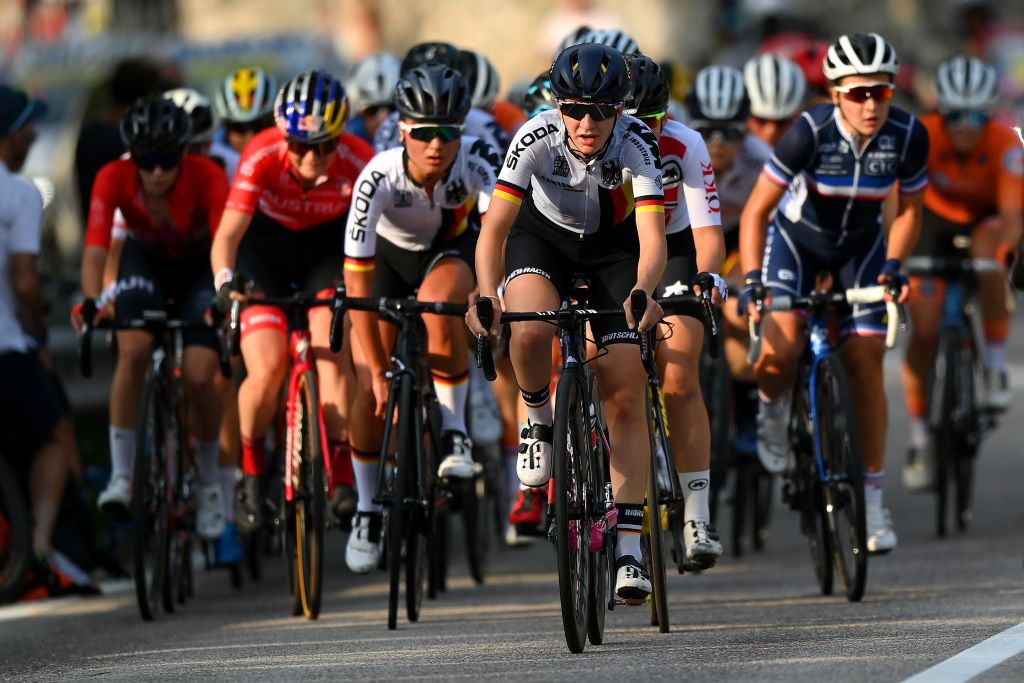 The first-ever U23 women’s road race world champion is set to be crowned in Australia in 12 months’ time, but there will be no standalone races for the category until further down the line.

UCI president David Lappartient indicated on Thursday that the sport’s governing body is in a position to open up a new category and new rainbow jersey for the 2022 Road World Championships in Wollongong. However, this would be part of the existing elite women’s road race, with the first rider aged under-23 to cross the line to be crowned the first U23 world champion.

Lappartient was speaking at a launch event for the 2022 Worlds on the rest-day of the 2021 event in Leuven, Belgium. Asked by Cycling News if there were any plans for a women’s U23 category, he highlighted the steps the UCI has taken to develop women’s cycling, before saying that it’s “something probably now to consider”.

Asked later about the possibility of working a U23 category into the existing elite women’s road race, he effectively confirmed it will happen in 12 months’ time.

“That’s clearly something that’s possible. That could be our first step,” he said.

“That would give the opportunity to have two official podiums, two official world champions, and that’s clearly something we can do, at least for next year. Definitely the goal next year is to create this U23 category within one race, with two world titles. That will be the first step before having a dedicated race, and we can be ready because at one moment you have to go.”

The Road World Championships programme currently features road races and time trials for elite men, elite women, U23 men, junior men, and junior women, plus a mixed-gender team time trial that was born two years ago in a bid to forge a new Olympic event. Amid the growing demand for equality, the absence of a U23 women’s category at Worlds has been called into question, with Sarah Gigante last week labelling it “completely unfair”.

Lappartient was joined at the event by UCI director of sports, Peter Van den Abeele, who gave a stronger indication that separate races for U23 women will happen at some point in the future, although timescales remain vague.

“That’s definitely something we need to work on and we are following track absolutely,” he said. “We did it in other disciplines, for example cyclo-cross. We have to reflect… should we wait until we have sufficient participation, or should we just go, and see if the numbers follow? That’s what we saw with cyclo-cross, when we created the category, we had more girls stepping into the discipline.”

However, both Van den Abeele and Lappartient both highlighted logistical headaches when it comes to effectively adding two events – and U23 women’s road race and time trial – to the Worlds programme.

“We have to see, because there are also some questions,” Lappartient said. “It’s wonderful to welcome Worlds but when you’re the mayor of the host city and you say ‘I close my city for eight or nine days, and now one day more’… because this is what will happen. That’s also something to consider.”

Van den Abeele added: “The Road Worlds programme is already quite busy. It’s not an easy task. I’m not saying this should prevent us from installing the category, but it’s something we need to look into. But there are always solutions to be found.

“The last point is that if we did consider having that category, would it be a good opportunity to do it in Wollongong, Australia? For equality, yes, but for our national federations, in a cost-efficient way, is it a good solution? That’s a question mark. That’s something we need to consult with the federations on. But starting with a U23 women’s category at the Road World Championships is something that should happen pretty soon.”

The launch event did see one move towards equality, with the announcement that the elite men’s and elite women’s individual time trials in Australia will both take place over the same distance, on the same courses, for the first time in history. Both events will take place on the opening Sunday of the Championships, with both fields tackling largely flat courses of around 35km.

“This will be a transformational moment for our sport,” said Wollongong 2022 CEO Stuart Taggart. “We want this event to place a spotlight on women and their amazing success, skill resilience and determination – not only to Australia but all over the world.”