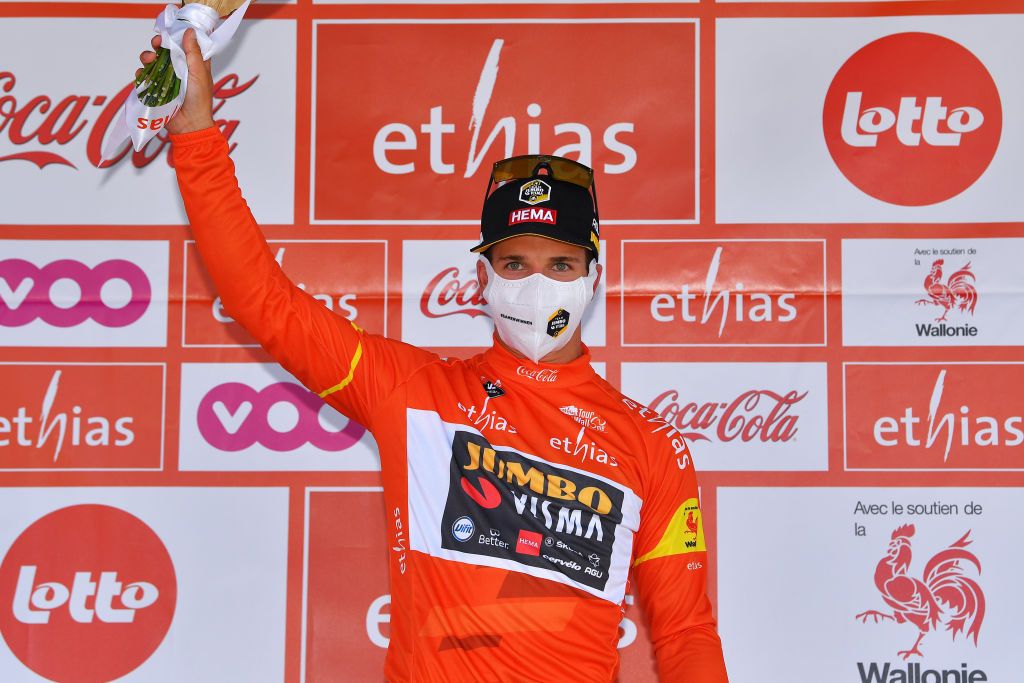 The sprint victory by Dylan Groenewegen in the opening stage of the Tour de Wallonie was the 25th victory for Jumbo-Visma this season, while on the other end of the spectrum it was the first for the Dutch sprinter in 17 months.

Groenewegen will ride on Wednesday in the leader’s red jersey for the five-day Belgian stage race, another day for the sprinters to take centre stage at the finish in Zolder.

“This win is more than just a win for me. I went through a very difficult period in which cycling came second. A lot has happened. Of course with the accident, but also in my private life,” Groenewegen said in a team statement after the stage.

“We have continued to work hard and it is very nice to finally win again. The team has been fully supporting me all the time and I am very grateful to them for that. That has helped me a lot.”

The 28-year-old rider didn’t line up for his usual menu of Classics this spring, instead he completed a nine-month suspension handed down by the UCI’s Disciplinary Comission for igniting a crash at last year’s Tour de Pologne that severely injured Fabio Jakobsen (Deceuninck-QuickStep). The incident left Jakobsen with multiple surgeries for severe facial injuries, including extensive damage to his jaw and teeth.

The high-speed crash on a downhill finish in Katowice, which also injured three other riders, was extreme because of its downhill direction and the lack of stability by the road-side barriers at the finish line, which broke apart during the incident.

Groenewegen himself fractured his collarbone in the Pologne crash, but also endured months of psychological distress related to death threats made against him and his family.

“First of all I am very happy for him that he finally won again after such a difficult period. It is a huge relief for him and for us. As a team, we took control from the start today and we continued to do so,” said Addy Engels, sports director for Jumbo-Visma.

“Our goal was to put Dylan in a position where he could sprint freely. That worked out well. It was a great team performance.”

Groenewegen’s first race of 2021 was not until May at the Giro d’Italia, where he had four top-10 finishes before pulling out of the race ahead of stage 14. He also had a fourth-place finish in the final stage at the Baloise Belgium Tour. A flat and fairly straight final five kilometres on stage 1 of the Tour of Wallonie helped Jumbo-Visma deliver their sprinter to an emotional first win of the year.

“It is a big relief that I finally [have] won again,” Groenewegen said. “I already felt good in the final of the stages in the Tour of Belgium, but back then I couldn’t finish it off.

“The team was in control today and did a great lead-out. I never got in a position where I could get boxed in. Timo Roosen was very strong as last lead-out rider and I only had to finish it off. I am really happy that worked out.

“I thank my team for all the work accomplished, especially in this first stage of the Tour de Wallonie where I found my way back to victory. The second stage in Zolder will still be a matter of sprinters. We will do everything to try to impose ourselves.”