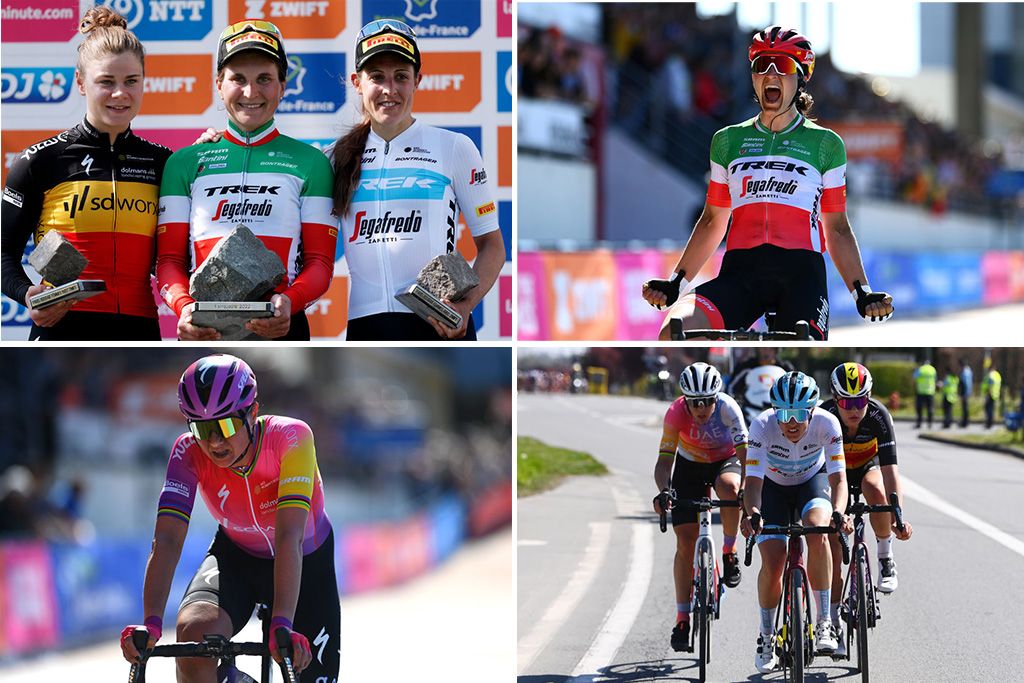 It may have been the second edition of the Paris-Roubaix Femmes but it felt almost as new as the first, given it was a complete turn around in the conditions – from mud covered cobbles to dusty dry pavé – and two of the most powerful figures from the initial running weren’t on the start line.

Last year’s winner Lizzie Deignan (Trek-Segafredo) was out on maternity leave and second-placed Marianne Vos (jumbo-Visma) was a last-minute COVID-19 withdrawal, which made it feel like a much more unpredictable and open race at the start line. Still, even though it felt like a very different Paris-Roubaix Femmes to last year, in some ways it was a surprisingly similar conclusion.

One Trek-Segafredo rider went solo, this time Elisa Longo Borghini, and held it to the line while others policed the groups behind and then finished off a powerful team effort.

That reassertion of Trek-Segafredo strength, with two riders on the podium and three in the top-10, was just one of the themes that emerged from the 125km race across 17 cobbled sectors to the Roubaix velodrome. Here are Cycling News’ key takeaways from the second edition of the Paris-Roubaix Femmes.

Trek-Segafredo back on top

After winning the Brugge-De Panne Classic in March, World Champion Elisa Balsamo commented that “in this team, we can choose how we want the race to go”. In the immediate term, the world champion’s assertion seemed to ring true: she had just won Trofeo Binda, and would go on to win Gent-Wevelgem the following Sunday, all three victories owing to well-executed plans from a strong team. However, Trek-Segafredo have been in a difficult patch since winning Gent-Wevelgem, missing out on the top 20 at Flanders and failing to make a mark over much of the last five races.

Though Trek-Segafredo certainly weren’t having a bad spring campaign, the last few races did raise some questions and highlight some weaknesses: leaning too much on Balsamo, faltering when things didn’t go quite right, or perhaps depleted by the absence of Deignan and an ill Elisa Longo Borghini.

On Saturday, though, all those questions were roundly answered. Not only did Longo Borghini again show why she’s one of the best one-day racers around, but it was a strong performance from the whole team. There were big expectations on the defending champions, but the squad rode well to not only set up Longo Borghini for an attack, but also disrupt the chase behind by having two riders in the group. Then Lucinda Brand rounded out the podium with third, making it a first and third for the team for a second year running, and Ellen van Dijk then came seventh to make it three Trek-Segafredo riders in the top ten again.

It wasn’t a perfect day – a crash for Hosking and a disqualification for Balsamo weren’t in the plan – but the difference was that Trek took these things in their stride and adapted to take an impressive win. The team will head into the next part of the season in the position of dominance we’ve come to expect from them recently.

Jumbo-Visma have options but struggle without Vos

The biggest news on Saturday morning was that Marianne Vos, runner up in 2021 and one of the riders most fiercely targeting the second Paris-Roubaix Femmes, would not be starting after testing positive for COVID-19. Pegged as one of the outright favourites for the race, Vos’ absence was a huge blow for Jumbo-Visma.

In the run-up to Roubaix, however, Vos’ Jumbo Visma team and teammates had been keen to stress they had options going into Saturday, with Coryn Labecki pointing to both herself and Romy Kasper as possible alternate choices depending on the race outcome. But when the hypothetical ‘Vos is out’ scenario became reality, how did the rest of the team fare? The answer: not too well.

It was Teuntje Beekhuis who secured their best result in 14th, as the team missed key splits and were largely racing from behind, lacking the driving force of Vos. Though, another thing they were missing was luck, with 19th-placed Romy Kasper and Labecki both having to grapple with punctures, in fact the count reached three for the rider from U.S. who finished 24th.

Jumbo Visma have improved their squad going into this season and the depth is building but it seems they’re still slightly lost without their star Marianne Vos in the Classics.

SD Worx made a rare but costly tactical error

In their desire to get it right and make up for last year’s disappointment, SD Worx may have overthought the tactics in Paris Roubaix and therefore missed a winning opportunity.

The team’s strength usually lies in not just the number of strong riders they have, but their commitment to the notion of ‘it doesn’t matter who wins, as long as it’s us’. They often go into races with a nominal leader, a certain rider as Plan A, but are prepared to change that plan in response to whoever is strongest on the road. On Saturday, though, an unusual show of rigidity proved costly for the Dutch team.

Chantal van den Broek-Blaak was the team’s designated rider for Roubaix, and they seemed unwilling to divert from that plan. With less than 50km to go, Lotte Kopecky escaped with Lucinda Brand (Trek-Segafredo) and Marta Bastianelli (UAE Team ADQ) in what looked like a promising move but the leading group lacked a certain impetus. Speaking to Sporza after the race, Kopecky explained she was under instruction to not commit fully to the move as she wasn’t leader, with the team preferring to put pressure on the group behind rather than push the front trio to the line.

As soon as the Kopecky move was caught, though, Longo Borghini launched her winning attack, going solo to the line, which begs the question: how far could the Kopecky-Bastianelli-Brand group have gone? In what was clearly a strong move, SD Worx perhaps made a misstep by not committing to it.

Kopecky eventually won the sprint for second, with Van den Broek-Blaak visibly struggling after the chase attempt. But after already winning Strade Bianche and the Tour of Flanders this season, second at Roubaix was not a huge cause for celebration for Kopecky, who was honest about her disappointment after the race. For a team who are so rarely caught out – either tactically or numerically – SD Worx will be lamenting getting it wrong and again missing out at Roubaix.

Just as SD Worx lost out when the Kopecky-Brand-Bastianelli move failed to cement its lead, so did Marta Bastianelli. But whilst Kopecky and Brand went on to secure 2nd and 3rd in the velodrome, Bastianelli and UAE Team ADQ were perhaps the biggest losers from the way the finale panned out.

When she first followed Kopecky off the front, Bastianelli looked not only motivated and ready to commit to the effort, but she looked skillful on the cobbles, cornering and navigating difficult sectors with confidence. The move was perhaps the perfect chance for Bastianelli, but once reabsorbed and with SD Worx and Trek making it hard in the group, the Italian found herself on the wrong side of the split and was denied even the chance to sprint for the podium.

A 15th place in the end is a somewhat forgettable result for the former world champion – who was 5th here in 2021 and rarely features outside the top 10 in Classics races – but also doesn’t convey the strength of her ride. Bastianelli seems well suited to the cobbles of Roubaix, and if she follows through on her plans to retire at the end of this season, it will be a shame to not see her return to the pavé for another chance to deliver at Paris-Roubaix.

It’s often said that to do well at Roubaix, everything has to go right. No mechanicals, no punctures, never having to expend energy chasing back on to the group. But on Saturday, several riders poked holes in that theory, coming back from significant issues to record impressive results.

Hitting the cobbled sectors with 80km still to complete, the racing was on a long way from the finish and the peloton was splitting from the first sector, already catching out many riders. Grace Brown (FDJ Nouvelle-Aquitaine Futuroscope), was already on the back-foot on the start line, returning after a forced COVID-19 break, and then she crashed 2km before the first cobbled sector, leaving her on the chase for 3 sectors. Many would say your race is doomed if you’re battling that early on, but Brown’s determination meant she fought back to finish 12th, in the third group on the road.

Two even more unfortunate riders still managed to secure top 10. Ellen van Dijk suffered a poorly-timed puncture on one of the hardest sectors, having to wait a significant time for mechanical support, but harnessed her world champion time trialling skills to bridge all the way back to the front. Despite the energy expended, Van Dijk figured in the final selection behind Longo Borghini, taking 7th. In fifth was Amstel Gold Race winner Marta Cavalli (FDJ Nouvelle-Aquitaine Futuroscope), an impressive feat for the rider more suited to climbing, but even more so when considering she had punctured and come off her bike with 50km to go.

Luck is important at Roubaix, but if one thing is clear from Saturday, it’s that strong riders need more than a small dose of misfortune to stop them.