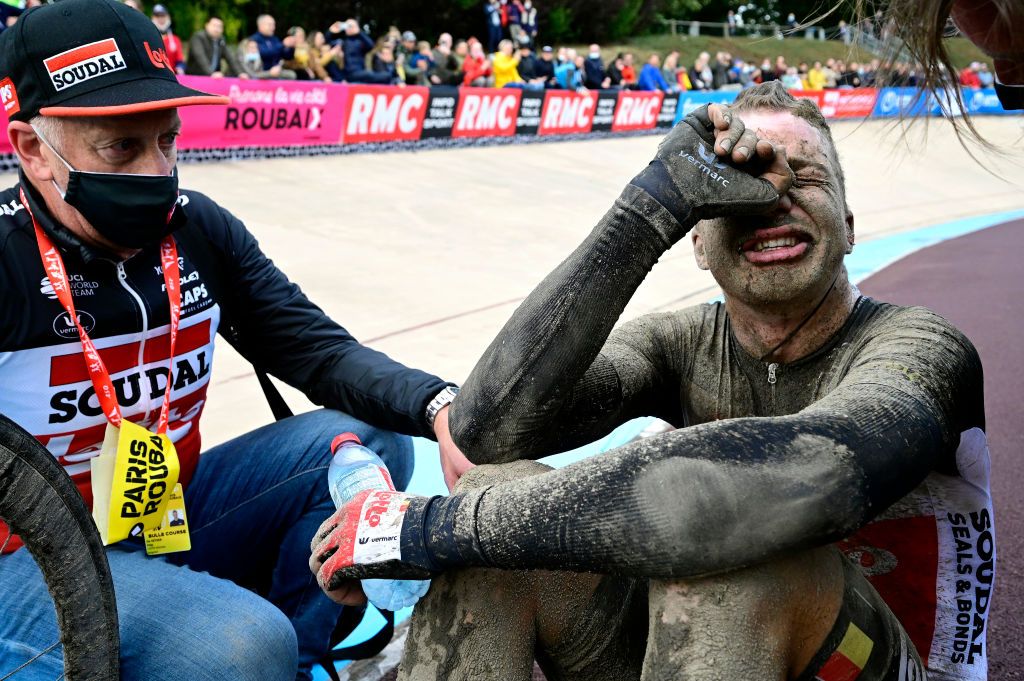 The surprising name on the 2021 podium of a rain-soaked Paris-Roubaix was certainly young Florian Vermeersch (Lotto Soudal) who took third in his debut in the Hell of the North.

Before racing this Monument, the 22-year-old Belgian rider twice took part in the Tour of Flanders but never made it to the finish. On Sunday though he was ever-present and did much more than just reach the vélodrome, he survived all the scrimmages and, partly due to the bad luck from Gianni Moscon (Ineos Grenadiers) and partly due to a splendid performance, he was there in Roubaix to sprint for the victory.

Vermeersch launched the sprint from behind and surprised Mathieu van der Poel (Alpecin-Fenix) with his speed but Sonny Colbrelli (Bahrain Victorious) managed to time his sprint to perfection and jump to the victory. Shortly after the finish Vermeersch fell to the ground and burst into tears, ruing the missed chance to win Paris-Roubaix.

“I’m mostly disappointed right now, especially because of the way it happened, in a sprint. That’s hard to digest. In a few minutes or hours, I’ll be proud of what I achieved,” a still emotional Vermeersch said in the post-race flash interview.

“I knew that I had to go first before the final corner because those guys, they can win bunch sprints. They were looking at each other and I went for it. In the corner, I was leading so that was perfect but in the finishing straight I was feeling cramps everywhere and Colbrelli was able to pass me. It’s bitter to finish as runner-up.”

During the post-race press conference in the STAB-velodrome Vermeersch gained back his composure. He was reminded that a certain Tom Boonen also cracked the podium during his maiden Paris-Roubaix which also happened to be a rain-soaked edition. The Flemish media asked Vermeersch if he felt the comparison was possible. “No, definitely not. I don’t want to compare myself to Tom Boonen. He’s got such big palmares. For me to equal that will take a lot more big achievements. I’m just focusing on my own path. I’m really happy with this today. We’ll see what the future brings,” Vermeersch said.

The future is shining brightly for the young Belgian rider who combines history studies with a local mandate in Lochristi as a politician with his cycling ambitions. Two weeks ago, Vermeersch captured the bronze medal at the U23 ITT world championships between Knokke-Heist and Bruges.

That good form was still present during Paris-Roubaix. Vermeersch featured in the large breakaway group of 31 riders that gapped the peloton during the first hour of racing. He always rode near the front of the group on the pavé sectors and ended up in a four-man lead group after 100km of racing. The four-man group was reduced to a two-man lead group of youngster Vermeersch and 23-year-old Nils Eekhoff (Team DSM). More than 50 kilometres later Gianni Moscon (Ineos Grenadiers) and five other riders bridged up to the duo.

Vermeersch survived the next selection and rode in front with Moscon and Tom Van Asbroeck (Israel Start-up Nation). Two pavé sectors later – with 53km to go – Moscon blasted away. Van der Poel, Colbrelli and Guillaume Boivin bridged up to Vermeersch and Van Asbroeck. Moscon never lost time on the chase group and seemed to be on the way to victory until he punctured and needed a fresh bike at 31km from the finish, then crashed and suddenly lost almost all his comfortable lead. Boivin crashed away on the cobbles of Camphin-en-Pévèle at 20km from the finish and on the famous pavé sector at Carrefour de l’Arbre, Moscon was caught back and left behind. At 15km from the finish, three men were leading the race and riding towards the vélodrome with Florian Vermeersch being one of them.

When Cycling News asked Vermeersch to talk about the ever-changing race situations he was in, Vermeersch had a lot to say. “The goal was, in the beginning, to be in the breakaway, at least if there was a big breakaway. We achieved that goal really early in the race. We were with three guys in it. It was a bit of a battle to get a good position towards the first sectors but I managed myself well. After four sectors we got away with four. Then, I didn’t see what happened, suddenly two guys crashed out. From that moment on I told the guys that we just had to keep going. If we don’t kill ourselves but if we just keep riding then eventually a group will come and maybe we can follow them. That’s what happened.

“At one moment Moscon went really hard. I had a really difficult moment there and got dropped. I was able to recover a little bit until Mathieu van der Poel, Colbrelli and Boivin came back. I was over my bad moment and felt really good again. I found myself with Van der Poel and Cobrelli on Carrefour de l’Arbre. From that moment on I knew that I was riding for the victory.

“In the final, I was with two guys who won bunch sprints so I thought I definitely had to attack and tried two times [at Gruson and before Crupelandt, BD]. The first time Van der Poel responded by riding next to me and the second time Colbrelli played it smart. In the end, it came down to a sprint. I started my sprint at the right moment but in the final 50 metres I had cramps everywhere and Cobrelli could jump over me,” Vermeersch said. Those attacks might have been costly but Vermeersch had no regrets, saying he would do the same again.

Vermeersch continued to talk about the incredible day he enjoyed in the north of France. “Riding on the velodrome was pure adrenaline but actually I had it throughout the whole race. Because I was always in the front, always the first one to hit the sectors. There were a lot of Belgian fans on the roadside today. They screamed a lot for me today. It was just goosebumps all around. The race definitely suits me but I never thought that in my first Paris-Roubaix I would become second. It was my goal to get on the podium in Paris-Roubaix at least once in my career and I managed to do it in my first Roubaix ever. I’m made for the classics. I’m kind of a heavy guy. I’ll definitely never become a climber. It’s just made for me,” Vermeersch said.

One might wonder if Vermeersch will be capable of going well in a dry edition too and Vermeersch liked the idea that he was one of the few riders in this peloton who had never done a dry Paris-Roubaix. In this edition Vermeersch benefited from his cyclo-cross background, a discipline he focused on until 2017 in the Junior category. He raced against a certain Tom Pidcock in those days.

Apart from that, he’s got the whole package to go well on the cobbles. “I can definitely tell you that my back is hurting a lot. It will take a few weeks to recover from that but I’m not the kind of guy who gets cold quickly. That wasn’t a big deal. The rain is just a mindset. If you embrace it then it’s not a big deal anymore. I quite like it actually because in the past – it’s already been a while – but I was kind of used to slippery conditions and know the feeling of no-grip. I definitely want to ride a dry Roubaix as well. It doesn’t matter to me. At the start today I was really motivated because I like to ride in the rain. To do a Roubaix in the rain was triple motivation.”

In half a year Vermeersch will likely be racing Paris-Roubaix again. He was asked whether he would be a different rider when lining up for the start in Compiègne. “I hope not. I hope I can ride like I always do. I like to ride in the offensive but I’m not going to lie: the experience I gained in the past 1.5 years. I’ve done a lot of classics. I have to thank the team for that. They allowed me to ride all the classics I wanted to. At the classics next year I will have gained a lot of experience and that will definitely help me,” Vermeersch said. He will conclude his season at Paris-Tours next week.