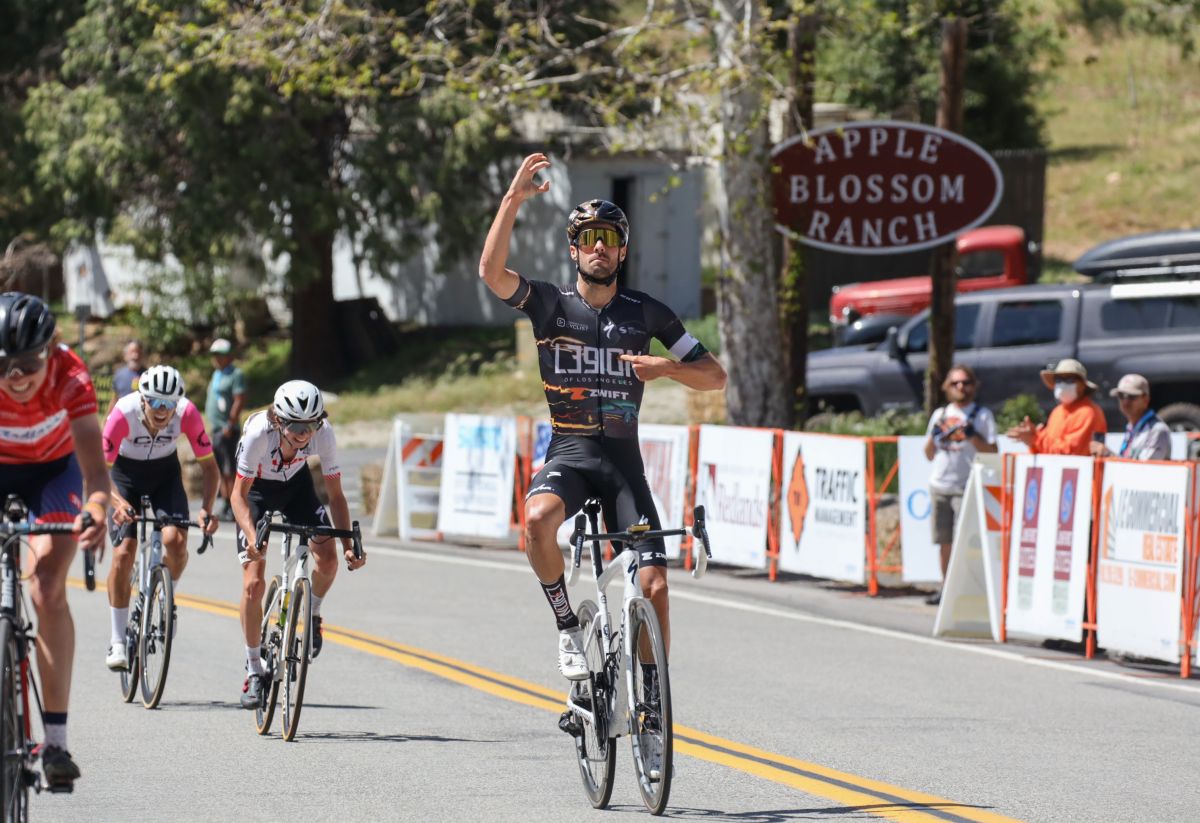 The trio finished the 90-mile Yucaipa Road Race in 3 hours, 52 minutes, 3 seconds, arriving at the finish line of the signature 5.1-mile climb on Oak Glen Road at the same instant as Emily Marcolini (3T/Q+M) completed stage 2 for the win in the women’s elite race.

The second day of racing was filled with chaos. The men’s field was neutralised and halted one mile from the start line of their fifth of six laps on a 14.1-mile circuit, in what Redlands Race Director Eric Reisner  called “a situation” and “things were becoming too dangerous for the riders”.

There was no report of any rider injuries, but the men’s field was stopped for 30 minutes for what observers in the area said involved race officials working with local public safety personnel to resolve a lack of communications with course marshals.

“The reason why we stopped the race is that we got separated from our marshals and we weren’t able to contact them,” Jeff Woo, chief race official said in a statement. “We had to pull those marshals back to make sure the riders were protected.”

While the men’s peloton remained on the side of the road, the women’s field continued to race, both using the same circuit like previous years. The women were more than halfway through their 61.8-mile road race and were allowed to pass the area as the situation was deemed to be safe and controlled. The men’s field resumed shortly thereafter, however, the delay was not long enough for the two fields to remain separated on the final climb.

Two riders formed an early break in the men’s race, Chris Riekert (Team Mike’s Bikes) and Kaler Marshall (Expeditors Elite Cycling), and had a three-minute advantage on the peloton 25 miles into the stage.

After the 20-minute neutral stoppage, the fifth circuit resumed and three more riders bridged across to Riekert and Marshall – Alex Murison (Red Truck Racing p/b Mosaic), Luke Feuerhelm (Above and Beyond Cancer) and Thomas Schellenberg (TaG Cycling Race Team). The quintet drove their advantage to 2:30 with 30 miles to go, with Feuerhelm the first to drop out of the break.

Marshall took the top KOM points as the foursome held a 1:20 margin over the peloton at the start of the final lap. Once on the climb on the foothills of the San Bernardino Mountains, the fireworks began, with L39ION six riders to set up Ovett for the final surge at the top of the climb for the victor.

Ovett took over the GC lead with Maris four seconds back in second place, and White another two seconds down in third. Eric Brunner (Blue Competition Cycles) is in fourth place on GC, 31 seconds off the pace. Cole Davis (Voler Factory Racing), who won stage 1, moved to seventh on GC, 45 seconds back. Marshall switched from the sprint classification lead to the KOM lead, while Riekert took over the sprint lead.