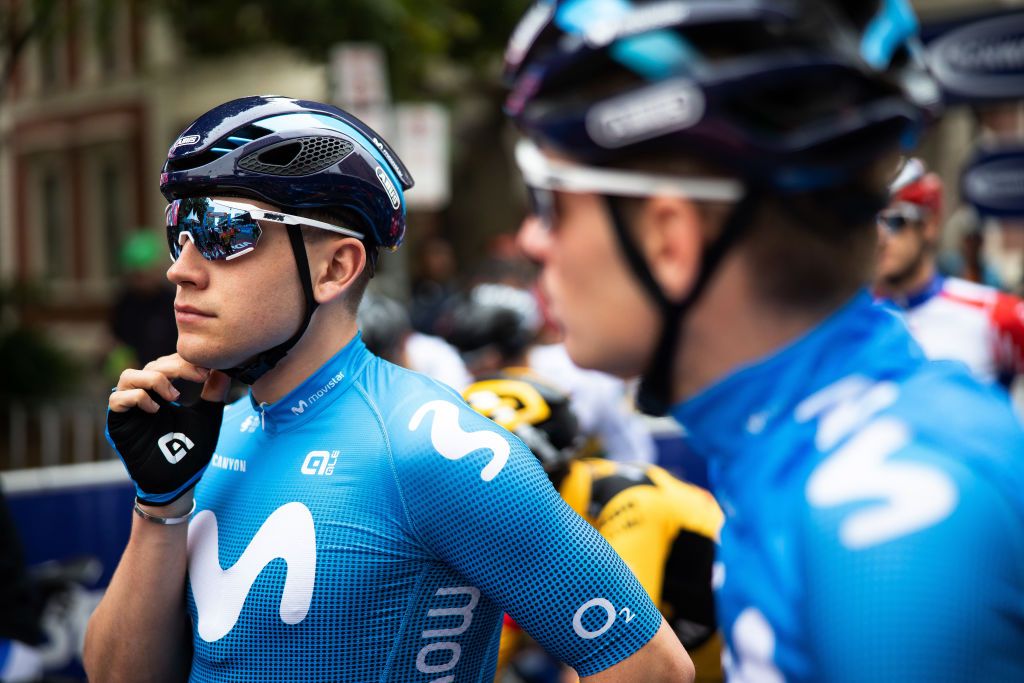 Britain’s Gabriel Cullaigh has confirmed he will drop from WorldTour racing with Movistar to Continental level with British team Saint Piran in 2022 but the 25-year-old sprinter from Yorkshire is happy to have another chance to keep his racing career alive.

Cullaigh stepped up from Wiggins Le Col to Movistar in 2020 but the COVID-19 pandemic derailed his debut and meant he raced just 48 days across two seasons.

He had caught the attention of the Spanish team by winning two stages at the Volta ao Alentejo but was unable to make an impact at WorldTour level and recently vented his frustrations to Cycling Weekly about his time at Movistar.

He was unhappy with the coaching methods of Leonardo Piepoli and lamented his race programme before working with former British rider Gary Sadler and securing some results in the second half of 2021. However, they were not enough to secure him a place at WorldTour or ProTeam level as teams closed or cut back on rider budgets.

Now he hopes a year at Continental level in Britain with some racing in Europe can help him find success and secure a second shot at major professional racing.

“After the last two years of only racing 48 days, I want to take advantage and race as much as I can. Saint Piran will be the best opportunity for me,” Cullaigh told Cycling Weekly.

“I wanted to stay at WorldTour or ProTeam level, but the only team who had contacted my agent Andrew [McQuaid] was Qhubeka. I’ve had my doubts, held on with hope, but didn’t want to keep waiting and waiting and then not have anything.

“[Saint Piran manager] Steve Lampier and I spoke at the Tour of Britain and we’ve kept in touch since. After a few weeks he said they had the funds that I asked for if I needed to come back. Steve was patient with me and I decided to go for it.”

Saint Piran is based in Cornwall in southwest England and was created by veteran racer Steve Lampier who has raced in Britain for a decade but will retire this year. Saint Piran also runs a women’s team and a development team and competed in the Tour of Britain.

“It’s an exciting project and Steve wants to make them a success, be a well-renowned British Conti team that everyone knows and respects, a bit like JLT was. That’s his goal and he has his ideas on how he wants to race and how he wants everyone to have a hands on approach. I liked the sound of it,” Cullaigh explained.

Cullaigh is inspired by fellow Briton James Shaw who dropped down to Continental level with SwiftCarbon in 2019 after two years at Lotto-Soudal. His results this year for Ribble-Weldtite at the Tour of Slovenia and Tour of Norway led to him signing a two-year contract with EF Education-Nippo.

“He sent me a nice message recently saying that it sounds like I am in a similar position to what Lotto did to him a few years back,” Cullaigh explained.

“James and I are the same age. We were on the [British Cycling] talent team together, we went through juniors and U23s almost like rivals, but we kept in touch.

“He really thought about sacking it all in, but he said he knows that would have been the worst decision he could have made. It’s been super impressive what he did this year and it’s great to see it’s possible to jump back up if I can find a place in the right team.”

Cullaigh is determined that the 2022 season will see him fight back after the disappointment of his two years at Movistar.

“I’ll give it a year – I owe it to myself. I’ll have a good bit of racing and there will be opportunities. I will get my head down and take the moments when they come

“Working with Gary, I can make it work. The main thing is focusing and enjoying my racing and competing. Hopefully the results will come, and with that I can continue this lifestyle and jump back up.”