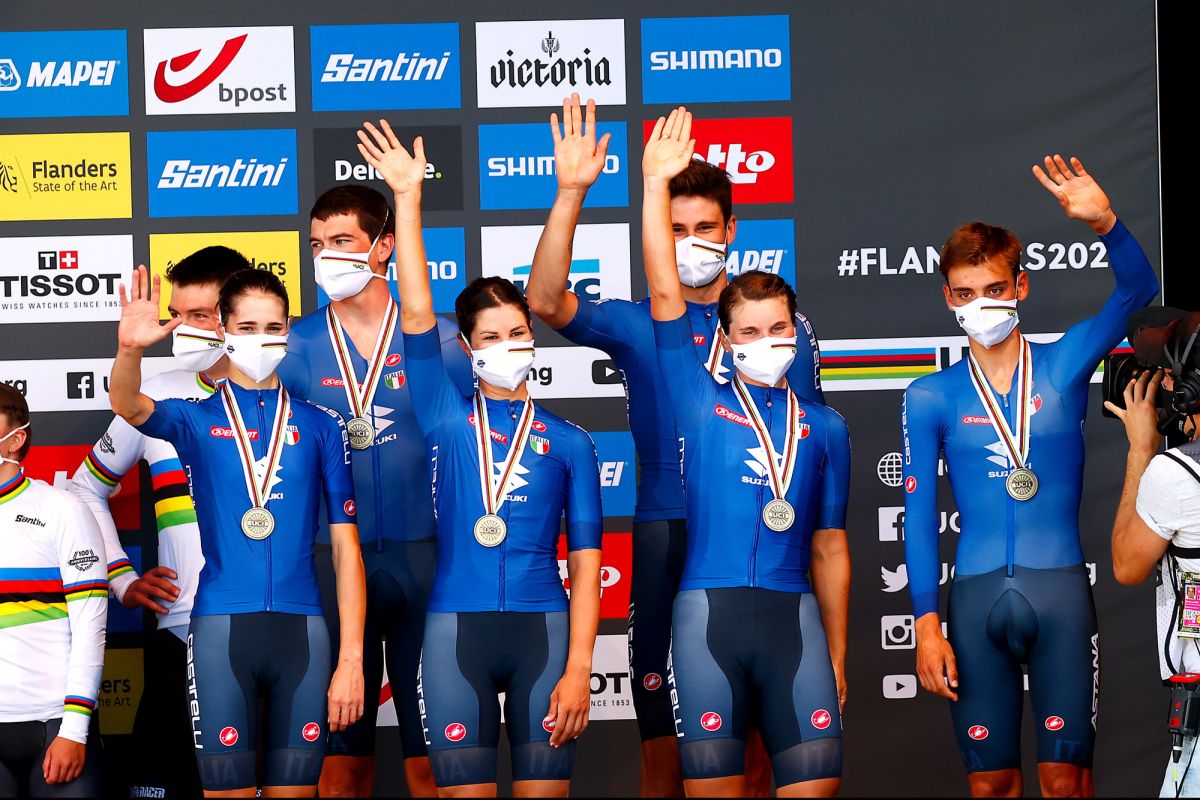 Filippo Ganna collected his second medal of the UCI Road World Championships on Wednesday as part of the six-rider team that won bronze in the Mixed Relay TTT event for Italy.

The 25-year-old was joined by Matteo Sobrero and Edoardo Affini for the opening leg to Brugge, with the trio topping the time sheets at the mid-race switch to the women’s team.

The trio’s time of 24:18 was 20 seconds quicker than eventual winners Germany, but Elisa Longo Borghini, Elena Cecchini, and Marta Cavalli shed time to the Germans and Dutch in the closing leg, though held off the Swiss squad by a meagre five hundredths of a second to clinch a medal.

After the ride, Ganna, who won his second consecutive individual time trial world title at the weekend, said that he and his teammates were happy to take a medal at the end of the 44.5-kilometre event.

“I think that for us it’s an important result,” he said. “We have this bronze medal. We pulled at full, full gas and we were very strong. We kept the result and we’re happy.

Longo Borghini, who finished alongside Cavalli as they sprinted for the line having completed a loop outside Brugge, echoed Ganna’s satisfaction with their day’s work, adding that they weren’t sure of the final result until the very end of their ride, such were the fine margins.

“We didn’t know until the last bike throw,” she said. “You don’t know how close you are, but we knew that being united was our power.

“We used it, and then in the end it was a smooth race. Marta and Elena were really strong, and the boys gave us a good advantage. In the end some other nations were faster, but we managed, so we’re happy.”

Reigning Italian time trial champion Sobrero, who joined Ganna, Longo Borghini, Cecchini, and Cavalli in Italy’s gold medal-winning ride in the same event at the UEC European Championships two weeks ago, credited Ganna and Affini for their riding, modestly stating that he found it hard to maintain the same level on the day.

“I’m lucky to have two teammates today in Eduardo and Filippo,” he said. “For sure, they were really, really strong. For me it was difficult just to be at their level, so I did my best and, in the end, we kept an advantage of 20 seconds.

“We went quite smooth and worked together very well. We’re happy with the result we got.”

Davide Cassani, who is at his final Worlds in the role of Italy national coach, had thought his team narrowly missed out on a medal at the finish, shouting “No” as they crossed the line before correcting himself. He said afterwards that he was happy with the result and pleased that an event like the Mixed Relay TTT brings male and female riders together.

“I saw the clock running and I feared I wouldn’t see our riders on the podium,” he said. “Then I saw the number two appear next to our flag, and with only the Netherlands to come I realised we had made it.

“I’m very happy because this event represents the union of two worlds that are usually separated, and I assure you that it was very nice to see the boys cheering for their teammates. We are a united group and we have clearly shown it.”