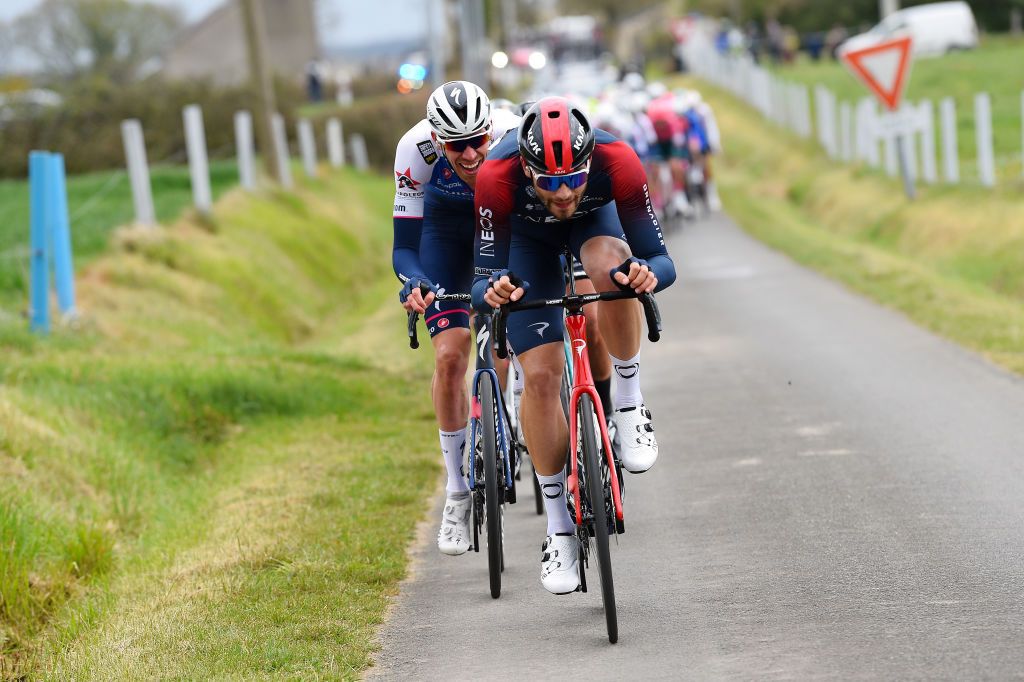 Like stage 1 winner Mads Pedersen, Filippo Ganna is riding the Circuit de la Sarthe in North-west France with the aim of being on form for Paris-Roubaix on April 17.

The world time trial champion joined Pedersen in the breakaway of stage 1 to Mamers and was sixth overall after the opening stage, 13 seconds down on the Danish race leader from Trek-Segafredo.

“Stage 1 was a hard day,” Ganna told Cycling News at the start of stage 2 in Le Lude.

“At Milan-San Remo, I arrived a bit tired because of the flu I got the days before, so I’ve tried to recover the training rides I couldn’t complete when I was stopped by the sickness. I’ve done pretty well. I finished yesterday’s stage pretty wrecked but it was useful.”

Paris-Roubaix is a race Ganna is yet to finish as a professional. He was outside the time limit in 2018 and failed to finish in 2019 but he won it in the under-23 ranks in 2016.

This year it is a major goal. His racing programme has changed with no Giro d’Italia planned. Instead he will attempt to take the first yellow jersey of the Tour de France on the 13km course of the opening stage in Copenhagen on July 1.

“I’m looking for good feelings during Circuit de la Sarthe ahead of Paris-Roubaix”, the Italian explained.

“Racing here helps getting the strength and in the pedal stroke I had lost due to so many days away from the racing. I hope I’ll get out of this race with the right rhythm.”

Ganna was adamant that racing remains a priority over training during a stage race.

“We want to get a stage win with Elia Viviani,” he added. “But we also know that the last two days of racing here are likely to take place under bad weather conditions. In that case, many things can happen and bunch sprints aren’t a sure thing. Therefore, we can try and position Plapp in the situation of going for the overall victory.”

The remaining three stages look taylor-made for Pedersen to retain the yellow-white leader’s jersey, sponsored by a local Rillette producer.

“As for myself, GC is not out of question but we must look at it day by day, as people say”, Ganna concluded.

“There are time bonuses up for grabs that can be crucial and I’m not fast enough to sprint for them all. I might as well get out of the top places on GC to break away for a stage win like I did yesterday.”

SOURCE: CyclingNews   (go to source)
AUTHOR: Jeff Quénet
All copyrights for this article, including images, are reserved to the original source and/or creator(s).