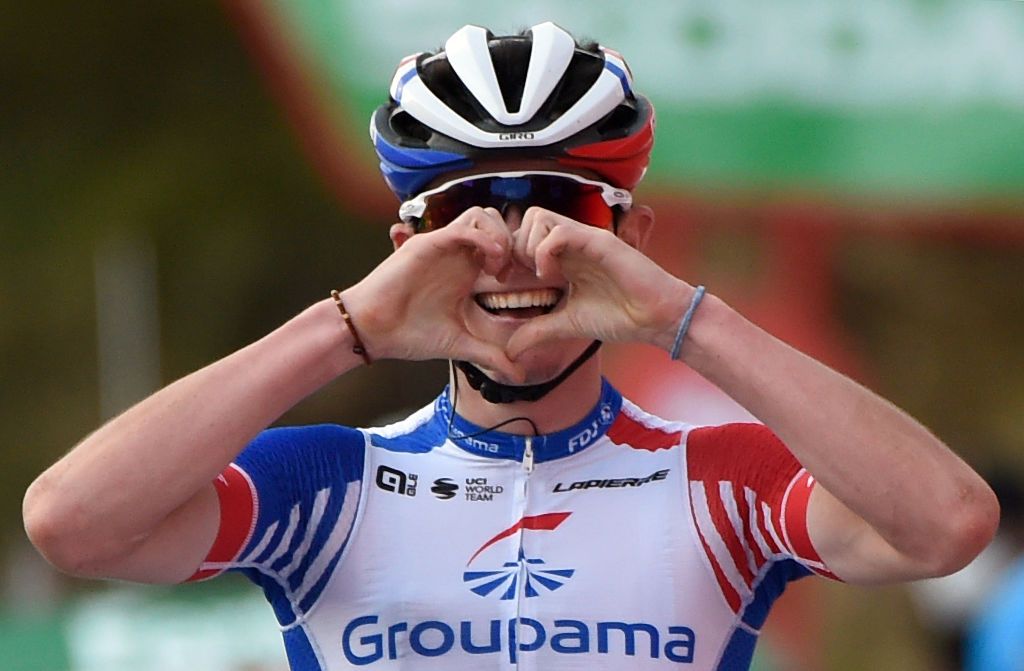 A podium in Liège-Bastogne-Liège has confirmed David Gaudu (Groupama-FDJ) as a rising star of French cycling and won him an important bet, too. The 24-year-old took third behind Tadej Pogacar (UAE Team Emirates) and world champion Julian Alaphilippe (Deceuninck-Quick-Step) in Liège on Sunday after a smart, tactical 259-kilometre race.

In the final kilometre, Alejandro Valverde (Movistar) led the group leading group of five, slowly upping the pace with Michael Woods (Israel Start-up Nation), Gaudu, Alaphilippe and Pogacar behind him. At 270 metres from the finish line, Valverde started his sprint. As Alaphilippe and Pogacar were blasting by on the right-hand side of the road Valverde and Woods faded as Gaudu kept going.

It turns out the Frenchman had extra motivation – a bet that he could land on the podium and one that is now going to cause one of his non-cycling friends more than a little consternation.

“When I felt the podium was coming into reach I was close to cramping but then I had to think about my friend who told me that if I placed on the podium in the Ardennes he would join me for a seven-hour ride, even though he’s not a cyclist; that’s a done deal. I thought about that at 50 metres from the finish,” Gaudu laughed.

Gaudu was already a double Grand Tour stage winner after nailing two stages in the 2020 fall edition of the Vuelta a España. This year he netted a nice victory – offered on a plate by Primož Roglič – in the Itzulia Basque Country, and a win in the Faun-Ardèche Classic.

Although his Classics record is somewhat thinner, Gaudu finished in the top 10 on the Mur de Huy in La Flèche Wallonne and sixth in his last outing in Liège in 2019. On Sunday afternoon he added his first podium in a Monument to that tally.

“I came here to improve on my sixth place from 2019 and wanted to do well. Third is like a small victory to me. It was a hard day but now I’m on the podium next to Pogacar and Alaphilippe, who’re champions of another level. It’s nice to be next to them,” Gaudu said in the post-race flash interview. “I was with the winner of the Tour and the world champion on the podium.”

That third place came quite as a surprise since Gaudu was expecting to finish dead-last in the sprint. “We were with five in the sprint and I finished third while being the least-fastest rider in the group. I’m very happy to be on the podium in a real monument of which there’s only five. I’m really happy,” Gaudu said and explained how he approached the sprint.

“In the final, I knew I wasn’t the fastest rider in the group so I tried to skip some turns. I did commit to the break to keep the speed high. Fifth was always going to be better than tenth,” Gaudu said.

Gaudu appeared near the front of the race when Ineos Grenadiers set a fierce pace up the Côte de la Redoute and also on the following Côte des Forges. He joined the moves but didn’t spend much energy in keeping those attacks alive. He knew that the key to get a top result in Liège-Bastogne-Liège was found at the Côte de la Roche-aux-Faucons. The final climb of La Doyenne has most often been decisive ever since its inclusion back in 2008. The official climb is 1.6km long with the summit at 13km from the finish and the steepest section at a nearly 14 per cent gradient. The unofficial climb adds a short descent and then continues climbing onto Boncelles.

“The Roche was the decisive moment in the race, like always. The whole day long I was thinking only about the Roche-aux-Faucons: the Roche, the Roche, I kept telling myself. I knew I had to go all-in on that climb, knowing that it would pass or I would blow up my engine there. It was really close, just before the top of the climb,” Gaudu said.

Director sportif Frank Pineau heralded the young rider. “We knew that David could go for a good race. It’s very encouraging. Third in Liège-Bastogne-Liège and seventh in Flèche, that’s starting to rank the guy. He managed like a boss in the face of adversity. Since the Vuelta, he has reached an important level, he is one of the strongest in the world.

“It’s a pleasure to work with him, he’s easy, always in the right place, he’s made zero mistakes. David is always very calm, very professional. The team did a great job for David until the Redoute, where Ineos made a big and unexpected attack. The result of the Ardennes is very good. Our team had never cracked the podium before in Liège-Bastogne-Liège,” Pineau said.

Gaudu debuted with 34th place in the 2018 Tour de France. He impressed with 13th in the 2019 edition. During the COVID-19-marred 2020 season, he rode the Vuelta a España where he captured two wins in mountains stages and finished eighth in GC. With Thibaut Pinot continuing to suffer from back problems, the French hope for glory at the Grande Boucle might well fall to Gaudu. He will be racing the Tour de France in July and will build up via the Tour du Finistère and the Criterium du Dauphiné.

“In the future, I want to keep making progress and mix in with the best at the biggest races of the world. It’s going well and I hope that it continues. I’ll keep doing what I’m passionate about, riding the bike that I love in a team that supports me well. The one-day Classics are what I love. You need to fight, be positioned well and the climbs are punchy. I love such climbs which are to be found near my home region too, although less hard. The general classifications make me dream as well. Why not try to have a go at both.”