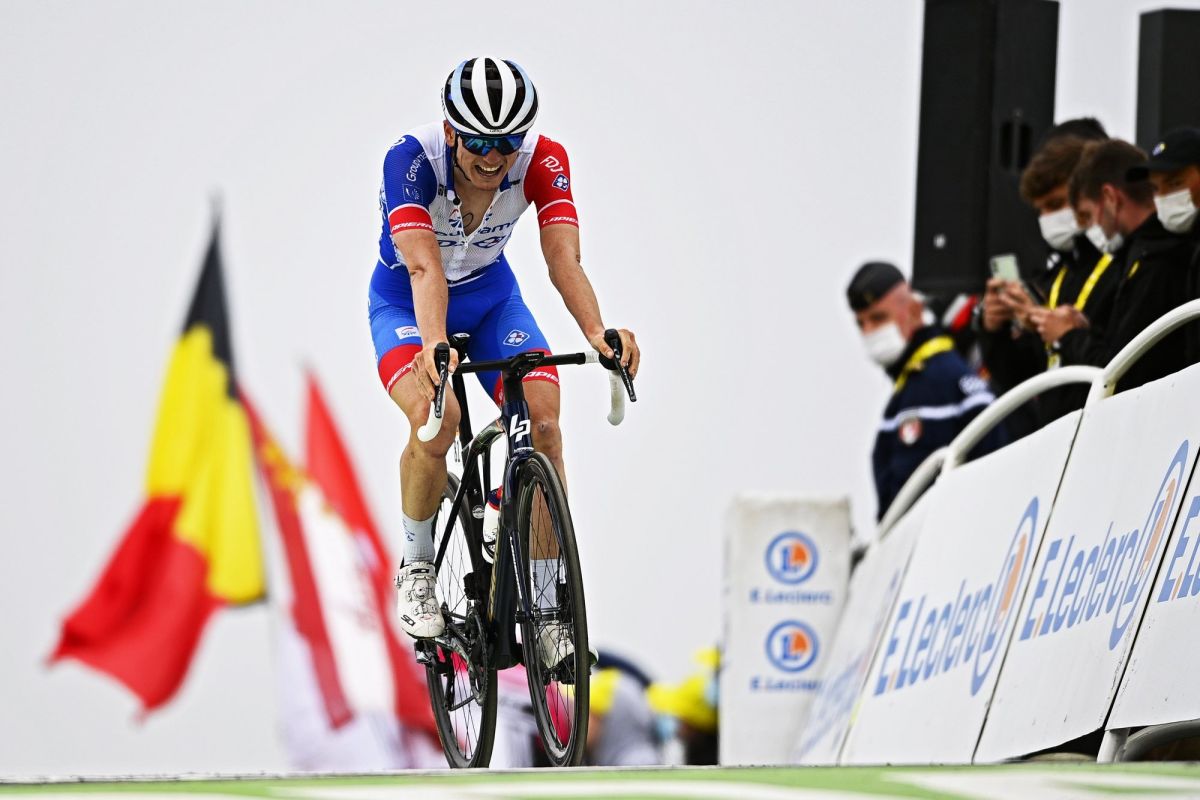 David Gaudu (Groupama-FDJ) may have felt his chances of a top finish on the overall of the Tour de France evaporate in the heat of stage 11, with its double climb of Mont Ventoux, but on stage 17 he continued to hold his own among the best GC contenders and plans to keep pushing through the end of the Pyrenees.

The 24-year-old French rider edged just a little closer to the top ten overall with his fourth place finish on the stage, which ended atop the highest summit finish of the race, the Col du Portet, making it his third successive day with a top-ten finish.

“It’s a good race for him today,” team manager Marc Madiot said in a statement. “It kind of shows where he belongs in the race’s hierarchy, and it’s a good thing for us to see him finish the Tour this way. Besides, he did not save his legs the day before, so that shows he’s recovering well. But he had already shown in the Vuelta last year that he’s good in the Grand Tour’s endings.”

As the peloton quickly thinned on the base of the final climb of the day, Gaudu held firm with the race favourites until Tadej Pogačar (UAE Team Emirates) attacked, taking Jonas Vingegaard (Jumbo-Visma) and Richard Carapaz (Ineos Grenadiers) with him to the line. Although Rigoberto Urán  (EF Education-Nippo) and Ben O’Connor (AG2R Citroën) initially tried to hold on to the trio they couldn’t sustain the pace.

“The pace was already very high before their attacks,” Gaudu said. “Uran and O’Connor tried to follow but exploded right after. As for me, I kept my own pace. I could see they were attacking each other, and there was no point in following them. I would have just ended up blowing up.”

Instead Gaudu slowly worked his way up to the riders ahead, then went in pursuit of the leading trio.

“I tried to come back on my own, gave it my all, but I didn’t bridge across,” Gaudu said. “I managed my climb as well as I could, and I couldn’t do better today. When you get beaten by stronger riders and you gave your all, you can’t have any regrets.”

The fourth place finish behind the top three riders on the overall comes after a ninth place on stage 16, after the French rider drove a spirited chase of winner Patrick Konrad (Bora-Hansgrohe). He also took off the gloves on stage 15, trying to attack from the break but it was ultimately Sepp Kuss (Jumbo-Visma) that delivered the move that stuck and Gaudu came over the line in seventh place.

Gaudu’s attempts may not have yet been rewarded with a stage victory or podium place but they have managed to shift him up from 15th place overall at the start of stage 14 to 11th, with a narrowing gap to the top ten. He, however, still sits nearly three minutes back from the tenth-placed Pello Bilbao (Bahrain Victorious).

Gaudu is expected to continue racing aggressively, with the team commenting that he said before stage 17 that he planned to “drop [his] kerosene on the road” until the end of the Pyrenees. On stage 18 the race moves onto a climbing packed 129.7 kilometre route, including the familiar slopes of the Col du Tourmalet, which the race will be tackling immediately before the finishing climb of Luz Ardiden.

“The Tourmalet is a climb full of history, but also full of memories for the team,” Gaudu said, referring to Thibaut Pinot’s victory back in 2019. “I like this climb, and it’s also the first real one I did as a kid. I hope to recover well to make the best possible stage tomorrow.”

“We are extremely motivated …. There are only four of us left, but we show that we’re still here in the race. We try to go in breakaways and get results. With this finish at the top and the final time trial, we have two opportunities left and we will try to make the most of them.”