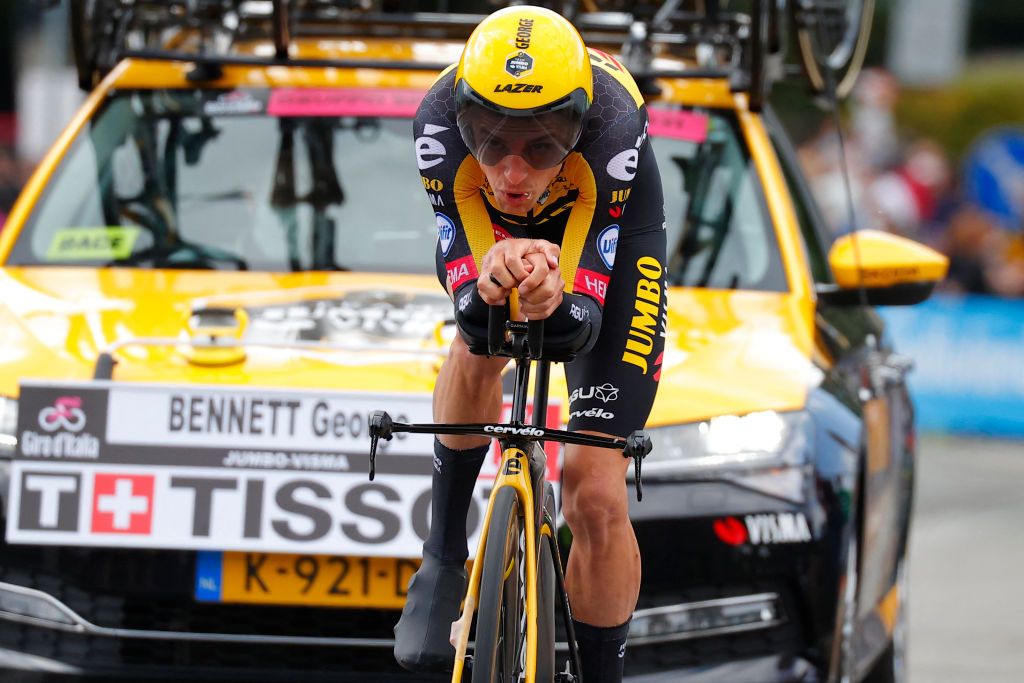 George Bennett completed the opening time trial of the 2021 Giro d’Italia regretting “getting it a little bit wrong with the pacing” but with good feelings about his start and arguably even better ones about Jumbo-Visma’s collective performance.

Together with Deceuninck-Quick Step, Jumbo-Visma were the only team to place three riders in the top ten of the Turin time trial and while Bennett himself finished well outside the highest echelons on the stage he was still well-placed in the mix in terms of the main group of GC favourites.

While the New Zealander’s GC options remain solidly on track thanks to his 52nd place, 41 seconds down on stage winner Filippo Ganna (Ineos-Grenadiers), Bennett had no doubt that his team-mates were Jumbo-Visma’s stand-out performers. The best placed of them was Edoardo Affini in second, then it was Tobias Foss in third and Jos van Emden came sixth.

“It was a really good day for us, when you see what  Edo’, Toby and Jos did and how good they were, that’s already a great start for us,” Bennett said.

As for his own race against the clock, Bennett reflected that although he had “hoped for a little faster, of course,” he nonetheless ended in the same band-width of time as the bulk of the GC raiders.

Bennett also warned against reading too much into an effort that, as he wryly recalled, “was only ten kilometres long and we have another 3,500 kilometres to go.”

“Obviously [Aleksandr] Vlasov and Remco [Evenepoel] and [João] Almeida were the only guys that really won,” Bennett argued. Of those three, Almeida (Deceuninck-Quick Step) claimed fourth place on the stage while his teammate Evenepoel finished seventh and Vlasov (Astana-Premier Tech) eleventh. That meant the Portuguese racer gained an advantage of 24 seconds on Bennett, while Evenepoel took 22 seconds on the New Zealand champion and Vlasov 17 seconds.

“But [Simon] Yates, Egan Bernal and Mikel Landa were all within a few seconds off me,” he pointed out, “so some GC guys finished in front and some behind me.”

Reflecting on the consequences of the Turin stage long-term, Bennett pointed out with his usual frankness, “I don’t think we know a lot more now about who’s really good or bad.”

Eighth overall in the 2018 Giro d’Italia as his best result of his 14 Grand Tour starts to date and after over a month without racing, Bennett’s main conclusion personally from such a short, almost symbolic, test was, in any case, a positive one. As he succinctly put it, “I felt good, and I’m happy with that.”