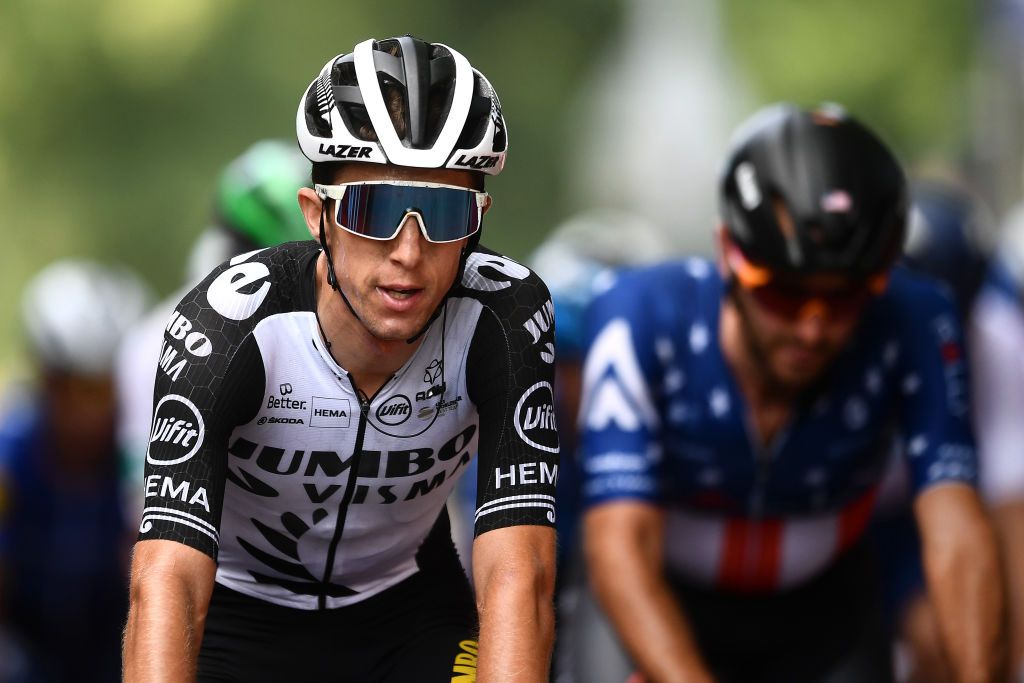 New Zealand national champion George Bennett rode his last stage race as a member of the Dutch team Jumbo-Visma at this year’s edition of the Tour of Britain, which concluded over the weekend in Aberdeen with an overall win for his teammate, Wout van Aert.

Bennett was one of only four men left standing for Jumbo-Visma by the end of the race, but the team formed a strong unit around the Belgian national champion and, despite a crash early in the race, Bennett remained a key domestique for the duration.

Following a strong ride as part of a seven-man breakaway across the North Pennines into Gateshead on stage 6, stage 7 was a difficult day in the saddle for the Kiwi, as he reported with his trademark honesty.

“It was horrible,” he said, admitting to still feeling the effects of the previous day’s efforts. “It was a big day yesterday for me in the break, [today] was a super strong breakaway and gained heaps of time and then they had to ride really fast and it was just like, when you know you’re suffering for nothing, just to get to the other end.”

Bennett came in almost four minutes down on eventual breakaway stage winner Yves Lampaert (Deceuninck-QuickStep) and likened the ‘sticky, hard roads’ of Scotland to those in his native New Zealand, an interesting comparison given his British connections.

“You could call it a homecoming of sorts, as part of my heritage is British, so it’s about as good as I’ll get. My parents are British and my brother who grew up here, and works for the RAF.”

He was clear that for him, though, New Zealand is home.

As the season wears on, fewer opportunities remain to see Bennett in the unique Kiwi fern jersey he has worn since his victory on home roads in February, yet attention has been more focused on his final days as part of the Jumbo-Visma squad he has been with for seven years.

Bennett confirmed that the Tour of Britain was not his final race as a Jumbo-Visma rider, but that he would not defend his title at Gran Piemonte, which he won with a late attack in 2020. Bennett spoke of his schedule for the remainder of the season.

“This is good training here, but this is not really a race for me,’ he said. ‘They’re not going to start me in Piemonte, I’m going to do Emilia and Lombardy. I’m just here to prepare for those and then a little altitude block and hopefully I’ll find the legs for the last couple of races.”

As confirmed by Bennett, his final races of the season will be the Giro dell’Emilia and Il Lombardia, where Jumbo-Visma are likely to field a strong team that may include Primož Roglič and Jonas Vingegaard. However, with a hard-fought second place in last year’s Il Lombardia, the Autumn Italian Monument is the perfect course for the Kiwi. When asked if he will get his own chances in those races Bennett was keen not to write himself off.

“We’ll see, I think it’s a case of last race, you just take your chance.”

Speaking of his seven years at Jumbo-Visma, Bennett was hard-pressed to pick out any particular highlights.

“I couldn’t pick one out, not on the spot anyway. It’s been a great team, got a lot of good things to say about it, and I will definitely miss a lot of the guys.”

He singled out Dutch champion Jos van Emden as one of those he will miss on a personal level, along with American fellow climber Sepp Kuss.

“From day one I’ve been in there with Jos, and then seen a lot of new guys come in the last couple of years with the Tour group. We’ve been living full time with each other for long blocks of the year, but you know all the young boys coming through, Sepp, are all good guys.”

Sitting on a different team bus

Bennett has spoken already about his decision to switch allegiances and was keen to reiterate that there was no ill feeling, it was simply time for him to make a change.

“There was not really a reason to leave Jumbo after seven years, I just needed to live a little, and try something new.”

Bennett doesn’t see the move as anything other than a change in focus.

He said “I’m not quitting cycling, just sitting on a different team bus. I still live in Andorra, we will still train together, but it’s more of an opportunity to meet new guys.”

UAE have taken on a great deal of talent during the summer transfer period primarily in support of Tadej Pogačar, leading many to suggest that riders may get lost in the big-spending Emirati set-up. Bennett refuted this, speaking highly of his interactions with the team so far and of his chances going forward.

“I’m excited about where I’m going and have had nothing but good experiences so far with UAE. They’ve been really welcoming.”

Bennett states for the record that while it is a strong group of guys at UAE, having his own chances is definitely part of the move, and that he will balance his responsibilities as domestique with the possibility of riding for his own results.

“I see myself going there and being a big support guy for Pogačar, hoping we can go to the Tour and defend that, but also along the way have a crack at some stage races and try and be a guy that gets results and also mixes it in with being a good help guy and being there for the team.”

SOURCE: CyclingNews   (go to source)
AUTHOR: Katy Madgwick
All copyrights for this article, including images, are reserved to the original source and/or creator(s).