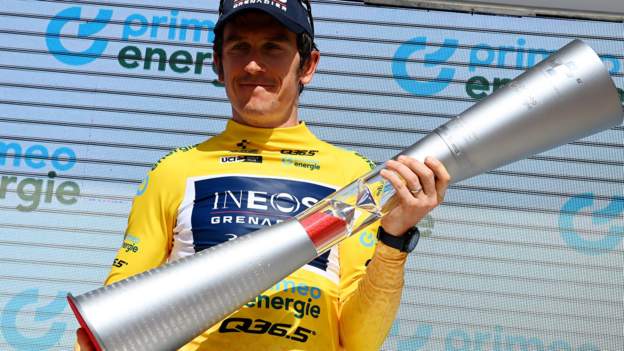 Geraint Thomas has become the first Briton to win the Tour de Suisse after finishing second on the final day time trial in Vaduz.

The 36-year-old 2018 Tour de France winner was well ahead of his main general classification rivals as Remco Evenepoel won on stage eight.

Thomas overtook Sergio Higuita for the win, beating him by more than a minute.

Jakob Fuglsang finished third in an event marred by almost 30 riders, including four teams, pulling out because of Covid-19 on Friday.

Williams’ Welsh compatriot Stephen Williams – who led for the first four stages – was among those forced out of the race.

Higuita, of Colombia, had held a narrow lead going into the 25.6km time trial in Vaduz, Liechtenstein, leaving Thomas as the favourite to win.

Thomas lived up to that billing, taking a huge chunk of time out of his rival to win the general classification by 1min 12sec, as the start of the 2022 Tour de France looms in Copenhagen on Friday, 1 July.

“I just want to go there [the Tour de France] and race hard and do what I can,” said Thomas after becoming the second oldest winner of the Tour de Suisse.

“We’ve got two other leaders on the team. Whether I stay up on GC for a while to play another card, go for stages, or help other guys … whatever. I’m happy to do whatever.

“I’ll take my chance for sure if it comes, I’ll help the boys if I have to.”