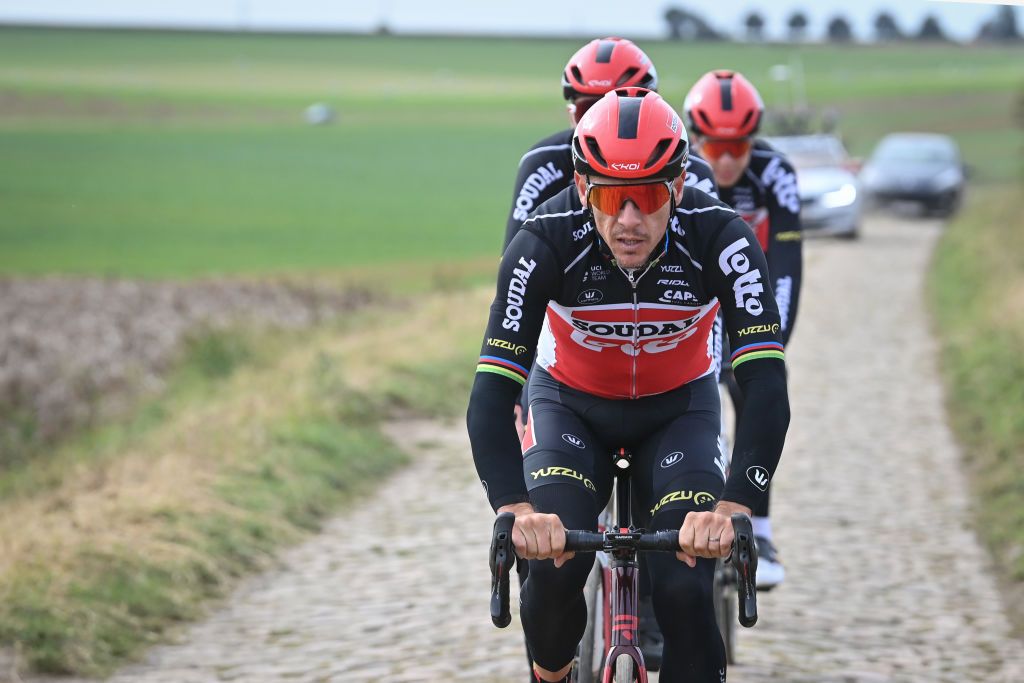 After two and a half years away, reigning Paris-Roubaix champion Philippe Gilbert returned to the cobblestones of Paris-Roubaix on Thursday afternoon, previewing the pavé ahead of Sunday’s long-awaited race.

Shortly after he and his Lotto Soudal team completed their course recon, the Belgian held court with a dozen journalists in a layby of the D40 heading into Wallers. There, as trucks and rival teams sped past, Gilbert gave his opinion on himself and the contenders ahead of what he said will be an uncertain edition of Paris-Roubaix.

“I think there will be more uncertainty with a lot of riders,” Gilbert said. “In the context of the spring Classics, we have more certainties about the state of riders’ form. This time, I’d say chapeau to any rider who can tell me he’ll finish in the top five on Sunday.

“I’m happy to be in this region again and I’m also happy to have seen the cobbles again, even though I’ve ridden over them 50,000 times. They were very slippery. On certain sectors there was mud and I even saw riders slip. I was on the limit.

“I’m here with no stress. I’m not the favourite and I just want to have fun on the bike on Sunday. We have to be honest – Lotto Soudal is not the most ‘obvious’ team to look towards here. In principle we can’t aspire to a top result, we have to be honest about that.

Rain has already fallen on the Paris-Roubaix course this week, and, though several cobbled sectors, such as the famed Trouée d’Arenberg were clean and dry on Thursday afternoon, others were caked in mud and numerous riders – Gilbert and Mathieu van der Poel (Alpecin-Fenix) included – have reported on just how slippery they are.

More rain is forecast in the build-up to both races at the weekend, and could even fall during the day, making for the first wet Paris-Roubaix since 2002 – when a 36-year-old Johan Museeuw took victory as a 21-year-old Tom Boonen made his debut.

Gilbert, who at 39 will be the second-oldest rider in the race, was a stagiaire for FDJ that year, and, for all his years in the peloton, will start the race with as much experience of racing a wet Roubaix as the youngest man in Sunday’s peloton, Trek-Segafredo’s Quinn Simmons.

In contrast to the widespread excitement from fans, many of whom will have been tracking weather forecasts in northern France for some weeks already, Gilbert said he was definitely not looking forward to the possibility of racing in wet conditions.

“It will be chaos on Sunday; it will be a Paris-Roubaix like I have never ridden before. It will be anything but fun and I hope the weather forecast changes,” Gilbert said.

“I’ve seen a lot of falls during the recons. I can’t imagine how we do this race without falling or touching the ground. If it starts raining it will be really chaotic. I’m not looking forward to it. I’ve raced in snow, in 45-degree heat, in gusts of wind, but never in mud like I saw today.

“Even in the few cyclo-cross races I’ve done in the past I have never seen this. It’s anything but pleasant, in my opinion. Fingers crossed; it will stay dry. If not, it won’t be the rider who goes fastest over the cobbles but the one who can stay in the saddle for the longest.”

Gilbert, who last time out won the race for Deceuninck-QuickStep on the Roubaix velodrome, beating Nils Politt in a two-up sprint, said that the weather forecast meant he couldn’t predict a winner, such is his belief that crashes – or lack of them – will decide the race. He did, however, note his former team as an obvious force in the race.

“The more riders from your team you have in the final, the bigger the chance you have of winning,” Gilbert said. “Then you always look at the same team [Deceuninck-QuickStep]. But with the bad weather forecast, I can’t give one name.

“If it really rains or is very dangerous, something will happen on every sector and some favourites will fall. When equipment breaks, you’ll have to wait a long time because the cars will be everywhere and nowhere. It’s going to be hell for everyone: riders, directeurs sportifs… But also: I’m not an expert. It’s only my fourth start.”