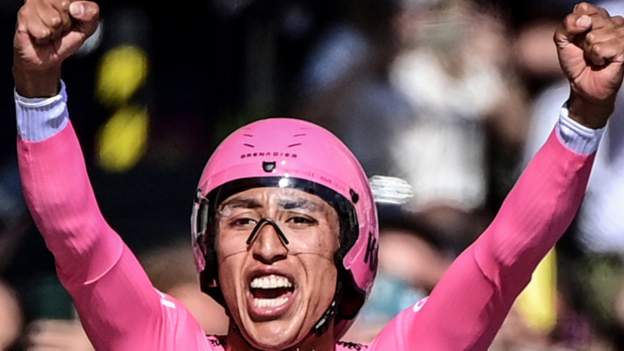 Egan Bernal has won the Giro d’Italia, with Britain’s Simon Yates finishing on the podium in third.

Team Bike Exchange rider Yates claimed his second best result in a Grand Tour after winning the Vuelta a Espana in 2018.

“When I arrived and realised I won, I can’t describe what I’m feeling inside me,” said Bernal.

“I was just focusing and thinking I cannot do a mistake – I don’t want to lose the Giro in one corner.”

British team Ineos have now triumphed in 12 Grand Tours since their inaugural season as Sky Procycling in 2010 – defending Tao Geoghegan Hart’s win at the Giro in Milan last October.

Team boss Sir Dave Brailsford said: “I’m thrilled. Especially with the way Egan was aggressive at the start and with that critical stage in Tuscany when Ganna drove on in the gravel.

“And then how he used his team – staying calm and measuring resources…they did that beautifully.”

As expected, Yates was unable to overhaul a time deficit of three minutes 23 seconds on the final day’s 30km time trial into Milan.

His best chance came the previous day during a punishing 166km stage in the Alps, but the 28-year-old instead lost time to Bernal, who dug deep and was assisted up the mountain by a blistering pace set by fellow Colombian rider Daniel Martinez.

Second place in the general classification went to Italy’s Damiano Caruso of Bahrain-Victorious, who produced the race of his life to finish on the podium, much to the delight of the Italian fans.

Britain’s Hugh Carthy of EF Education-Nippo finished eighth overall after racing well with Bernal and the other contenders across the three weeks.

The final stage of the race was won by Ineos’ Filippo Ganna.

It was a dramatic stage in glorious sunshine, as current world time trial champion Ganna had to swap bikes with two kilometres to go after suffering a puncture.

The 24-year-old still recorded the fastest time but was expected to lose it to Remi Cavagna of Deceuninck-Quick-Step, before the Frenchman misjudged a sharp corner near Duomo di Milano at the end of the stage and flipped over his handlebars into the crowd.

It had been a year to forget for Bernal, after developing a back problem in the build-up to last year’s Tour de France and then his capitulation on stage 15 as the leaders climbed the Grand Colombier, which led to him abandoning the race.

Indeed, he and his team were still concerned about a recurrence of that back problem during the closing stages of this race, which would have prevented him from rising at the tempo required to protect his lead – so victory comes with huge relief.

His first in the Giro came in the final gravel ascent of stage nine, when he powered past his rivals in impressive style.

Then he left everyone behind in the Dolomites having been chased by two effusive fans wielding chainsaws and nearly falling off his bike as he struggled to remove his rain jacket and show off the pink jersey as he crossed the line.

What happened to the British riders?

Yates was hoping to banish memories of losing victory late on in 2018’s Giro, in which Chris Froome’s phenomenal late push for victory blew the Bury-born rider away.

Prior to this race Yates had shown – along with his twin brother Adam of Ineos – the strongest form of any British rider so far this season.

Simon also won the Tour of the Alps warm-up race, beginning in Turin as one of the strong favourites. And unlike in 2018 he appeared to measure his efforts better this time, staying in touch across the three weeks as several contenders for the pink jersey crashed and burned.

But, just as Yates began to look like he was turning the screw with victory in the Alps on Friday’s stage 19, Bernal and his domestique Martinez kept a tempo the Brit simply could not respond to – as all of his team-mates long since burned away on the final mountain stage up to Alpe Motta.

In what is a relentless season, Yates will now try to win stages at the Tour de France, which begins in Brittany on 26 June.

Britain’s Carthy rode strongly but lacked the consistency of his rivals, gradually losing a few minutes here or there on each of the key stages in the race.

The 26-year-old will take encouragement from this showing but knows he needs to win stages in the manor of his victory on the Angliru climb in last year’s Vuelta a Espana – in which he secured third overall – to compete for victory in a Grand Tour.

Special mention should also go to James Knox of Quick-Step, who rode hard on the climbs for his leaders Remco Evenepoel of Belgium and Portugal’s Joao Almeida.

A race of broken bones and broken hearts

This Giro will be remembered for its brutal crashes and awful weather.

Second-placed Caruso, 33, had never won a World Tour race before, having spent his career as a domestique. But, after team leader Mikel Landa of Spain crashed out on stage five after hitting a marshal and another rider, Caruso took his place.

He surprised the peloton by staying with the pink jersey contenders for the rest of the race – even coming through the roar of Italian fans on the longest climb in the Giro to win Saturday’s stage 20.

Landa suffered six fractured ribs and a broken collarbone, as did Israel Start-Up Nation’s Alessandro de Marchi. The Italian also broke two bones in his back as he abandoned on stage 12 – just days after saying the race was “dangerous” and a “crazy circus”.

In the race’s other competitions, the ‘ciclamino’ points jersey was won by Peter Sagan of Bora-Hansgrohe, while Geoffrey Bouchard of AG2R-Citroen won the blue King of the Mountains prize. Bernal took the young riders’ white jersey.

Ineos’ Geraint Thomas and Tao Geoghegan Hart are competing in the eight-day race.