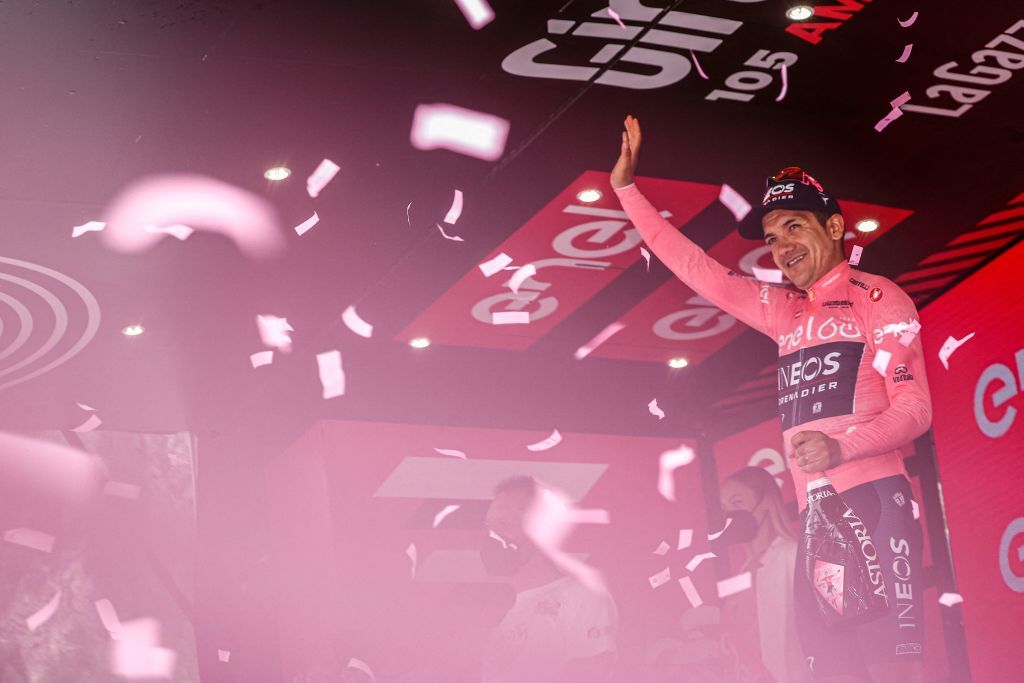 After the GC shake-up on stage 14 into Turin, the overall classification at the Giro d’Italia remained relatively unchanged after stage 15 in Cogne with Richard Carapaz (Ineos Grenadiers) maintaining the lead at the end of the second week of racing.

The 177km stage that started in Rivarolo Canavese, included three main ascents over the Pila, Verrogne and then the final ascent to the summit in Cogne.

The day wasn’t completely smooth for Carapaz, who crashed early in the race after a touch of wheels resulted in a mid-pack pileup just 6km into the stage. It wasn’t long before he was back on his bike with Ineos Grenadiers escorting him back up to the peloton.

The large group was no real threat to the overall classification and Ineos Grenadiers controlled the peloton behind to make sure Carapaz’s lead remained safe.

Guillaume Martin (Cofidis) notably squeezed into the top 10 after he attacked out of the peloton on the penultimate climb and finished the stage in 10th place about a minute ahead of the GC contenders, bumping Alejandro Valverde (Movistar) down to 11th.

Here’s a rundown of all the ongoing competitions at the Giro d’Italia. Click here for a more comprehensive explainer, including minor competitions such as the intermediate sprints prize and the fighting spirit prize.

Maglia rosa – The pink jersey is worn by the overall race leader on the general classification who has completed the stages so far in the lowest accumulated time.

Maglia ciclamino – The cyclamen jersey is the points classification. Riders accrue points at one of the two intermediate sprints during stages and also at stage finishes, and the man with the most points leads the ranking.

Maglia azzurra – The blue jersey is the mountain classification. Points are handed out to the first riders over certain hills and climbs during the Giro, with the hardest mountains giving the most points. Once again, the man with the most points leads the ranking.

Maglia bianca – The white jersey is the best young rider classification. It works the same way as the maglia rosa, but only riders aged 25 or under are eligible to win.