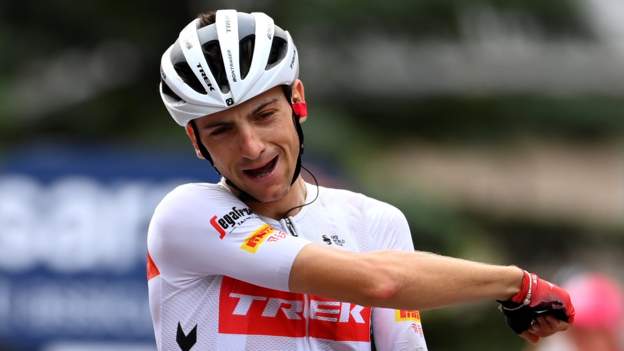 Giulio Ciccone claimed his first win in over two years with a fine solo victory on stage 15 of the Giro d’Italia as Richard Carapaz retained the race lead.

Italy’s Ciccone, 27, broke clear of the remaining breakaway riders with 19km to go and was in tears after crossing the line in Cogne.

After a successful 2019 season, the Trek-Segafredo rider has endured two years blighted by injuries and Covid.

“This was my most beautiful victory,” said Ciccone.

“It’s even better than the yellow jersey in the Tour de France or my first stage win at the Giro.”

This was Ciccone’s third Giro stage win and first since 2019, the year he also won the Giro mountains classification and spent two days in the leader’s yellow jersey at the Tour.

After winning the Trofeo Laigueglia in February 2020, his 2020 Giro campaign was hampered by catching Covid the month before the race, before he crashed out of the 2021 edition and also abandoned last year’s Vuelta a Espana because of a crash.

He added: “It’s been a really difficult period. When you try and win and nothing happens, it’s always more difficult and it really tries your mental strength.

Ineos Grenadiers rider Carapaz, who won the 2019 Giro, came home in a group containing most of the general classification contenders nearly eight minutes down on Ciccone.

France’s Guillaume Martin managed to get away from the peloton with 43km remaining and finished 1:42 ahead of the group to move up to 10th overall.

After a rest day on Monday, the race resumes with a 202km mountain stage from Salo to Aprica on Tuesday.