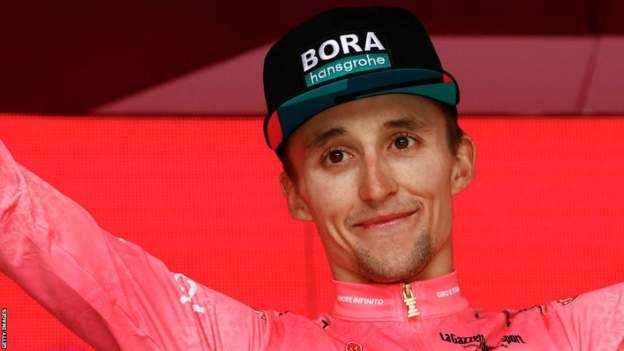 Jai Hindley is set to become the first Australian winner of the Giro d’Italia after taking the lead from Richard Carapaz on the penultimate stage.

Italian Alessendro Covi won the 167km stage in the Dolomite Mountains but the key moment happened behind him.

Hindley, who was three seconds behind Carapaz, now leads by one minute 25 seconds with a short time trial left.

Sunday’s 21st and final stage is a 17.4km individual race against the clock in Verona and Hindley should have built enough of an advantage for himself to take the title.

“I knew this would be the crucial stage of the race, with the brutal finish,” he said.

“We stayed patient until today, and it is amazing. We could not have timed it better. When I heard Carapaz was dropping down, I just went all out. We will see how it goes tomorrow, it is always hard to say how a time trial will go.”

Spain’s Mikel Landa, third in the overall classification, led the peloton with his Bahrain Victorious team-mates while climbing the Giro’s highest point, the Passo Pordoi.