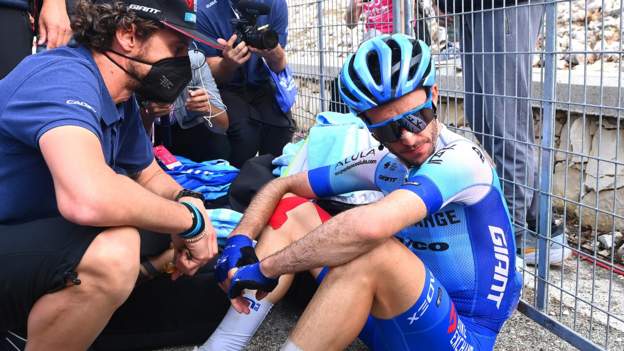 Yates was riding with a strapping on his injured knee

Simon Yates’ hopes at the Giro d’Italia look to be over after the Briton endured a difficult day on a gruelling ninth stage won by Jai Hindley.

Yates, who injured his knee in a crash in the fourth stage, was dropped by his main rivals on the steep final climb and crossed 11 minutes 15 seconds back.

Juan Pedro Lopez, not seen as a main contender before the race, impressively finished one minute 46 seconds behind Hindley to cling on to the pink jersey.

The race takes a rest day on Monday.

With Yates dropped, the most difficult day of the race so far ended with a contest up to Blockhaus between the other riders racing for the general classification.

Bora-Hansgrohe’s Australian rider Hindley outsprinted the rest of a five-rider group, which included Team Bahrain’s Mikel Landa and Ineos’ Richard Carapaz, as the road flattened out after brutal climb.

Yates’ latest struggle continues his misfortune at the Giro, which the BikeExchange-Jayco rider, 29, has targeted each of the past five seasons.

Having won three stages and led for 13 days in 2018, he cracked in the final week, before an underwhelming eighth-place finish in 2019 was followed by an early exit in 2020 after he tested positive for Covid-19.

He was one of the favourites again last year, but lost time in the rain on stage 16 and could not reclaim it in the final week, finishing third behind winner Egan Bernal and runner-up Damiano Caruso.