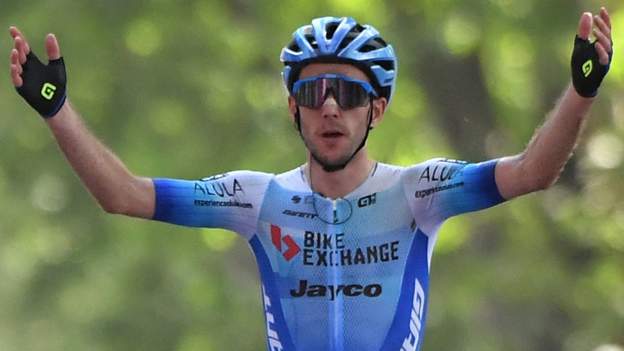 This year’s race was blown open on a thrilling stage 14, with Carapaz breaking away with 28km left.

But Yates, 29, was among a trio that caught the 2019 winner before the Team BikeExchange-Jayco rider raced clear for his sixth Giro stage win in Turin.

Jai Hindley edged second from Carapaz, who he trails by seven seconds overall.

Lopez, who had the pink jersey for 10 straight days and came into Saturday with a 12-second lead over Ineos rider Carapaz, dropped off the back of the chasing pack after the Ecuadorian’s break and is now more than four minutes off the lead.

Yates’ hopes of being in contention for the general classification title and his second Grand Tour win, after the 2018 Vuelta a Espana, were dashed as he endured a difficult day on stage nine.

The Bury rider, who injured his knee in a crash during stage four, was dropped on the gruelling climb to Blockhaus and lost more than 11 minutes.

But he showed his class in temperatures of more than 30C by reeling in Carapaz, after Hindley’s Bora-Hansgrohe team put the pressure on Lopez by launching the initial breakaway midway through the stage.

Asked if Saturday’s win made up for stage nine, Yates replied: “Not really. I mean, not to put a downer on the day but I came here to win the race. For me it’s another stage [win].

“I hope the legs stay as good as today. It was a really big effort, not just for me but for everybody.

“The gaps are enormous, so if this heat sticks around it’s going to be a very hard final week.”

Saturday’s 147km leg from Santena to Turin was the first of four straight mountain stages during the Giro’s final week – split by a rest day on Monday.

It ended with two laps around Superga and Carapaz seized the opportunity to wrest the pink jersey from Lopez, attacking just before the top of the climb on the second lap.

Hindley and Vincenzo Nibali caught Carapaz on the final ascent, of Colle della Maddalena, before Yates latched onto the lead group and rode clear with 4.5km to go.

“What a race today,” added Matt White, sporting director of Team BikeExchange-Jayco. “It was a big win, and a very nice turnaround by the team, and Simon as well.

“Things haven’t gone as planned but a true test of someone’s character is how they can turn things round, and Simon had a very impressive ride today.”

There was one minute and 23 seconds between the leader and the 10th-placed rider in the GC standings after stage 14. That gap is now more than nine minutes.

Carapaz added: “It’s been a short but very hard stage. I’m delighted with how it went. It’s a first positive step for the team. Now we’ll try to defend the maglia rosa (pink jersey).”

Sunday’s stage 15 is 178km from Rivarolo Canavese to Cogne, with the 21-stage race concluding in Verona with a time trial on 29 May.