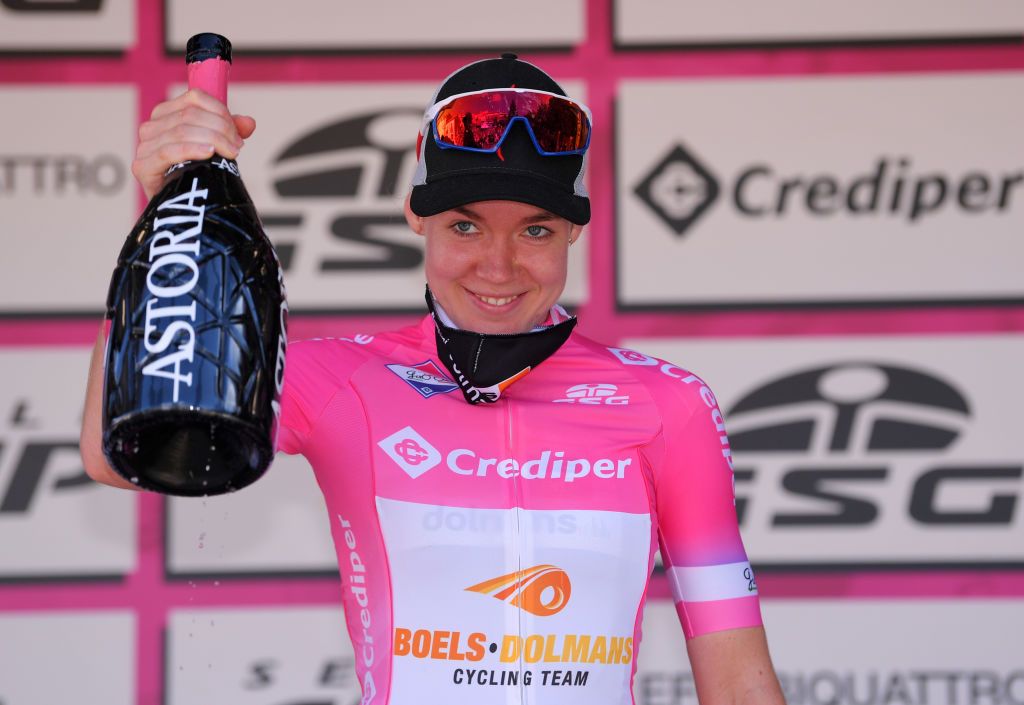 Pulse Media Group (PMG Sport), organisers of the Giro d’Italia Internazionale Femminile, have committed to 30 minutes of live television broadcast at this year’s 10-day race schedule to take place from July 2-11 across northern Italy. The event was downgraded to the 2.Pro Series for not providing required live television last year but aim to be back on the Women’s WorldTour in 2022.

“Each stage will be broadcast live and production will be organised according to the UCI international standards. A high quality of production has always been a strong point in the PMG Sport model,” organisers wrote in the published race guide.

The event will take on a new name – Giro d’Italia Donne – displayed on a new event website. Organisers have listed 24 invited teams, including all nine WorldTeams, the host regions and cities across northern Italy, and a promotional video announcing a commitment to live television broadcast.

Organisers specify 30 minutes of live TV, 2 motorcycles (cameras), 5 telecameras, helicopter with camera for transmission of A/V (audiovisual) signals, and aircraft for repetition of A/V signals, and an OBVan HD for live television production.

“We intend to provide the maximum public involvement along with distribution and use of videos everywhere,” organisers wrote on its website.

Organisers also state that the event will be live across across PMG Sport platforms, along with a range of international and national television boasting platforms; GCN, Discovery Channel, SparkSport, Claro-TV, NOS, RaiSport, SBS, Eurosport Player, and FloSports, along with La Repubblica, LA7, Tuttobici, Facebook, Youtube and Twitter, and will provide additional post-race video content with expert analysis.

The Giro d’Italia Donne is a long-running women’s race set to embark on its 32nd anniversary in July. From a historical context, it has been the biggest and most prestigious women’s race in the world. It is the only women’s event that, normally, covers 10 days of racing and includes iconic mountain passes such as the Mortirolo, Stelvio, and Zoncolan.

However, it has also historically been one of the toughest events for fans to follow due to limited live broadcast coverage over the years and there have been complaints of poor organisation and limited marketing of the event.

The race was postponed last year due to COVID-19 and held in September. It was also shortened to nine stages and won by Anna van der Breggen.

Race organisers promised 45 minutes of live television broadcasting as part of the UCI requirement to be part of the Women’s WorldTour last year. However, they failed to offer the required live coverage, and along with other organisational concerns, the sport governing body downgraded the race to the 2.Pro series in 2021.

Cycling News understands that the organisers of the Giro d’Italia Donne will be permitted to re-apply for WorldTour status in 2022.

It has stated that it will offer revamped security, administration, televised production, strategic management and operating teams, and enhanced marketing and communications.

The race across northern Italy

Organisers have not announced the full route details or major mountain passes, however, this year’s race will travel through the northern regions of Piemonte, Lombardia, Liguria, Veneto, and Friuli Venezia Giulia. They have provided the host cities, and the race will begin with a team time trial in Fossano Cuneo on July 2 and end at Matajur, a 1,642-metre mountain in the Julian Alps on the border between Italy and Slovenia, on July 11.

The new ProSeries events are permitted to invite 15-24 teams to participate, and they are open to a minimum of four and a maximum of 10 Women’s WorldTeams, which is entirely at the organisers’ own discretion.

The rosters for each team competing at the 10-day race have not yet been released.