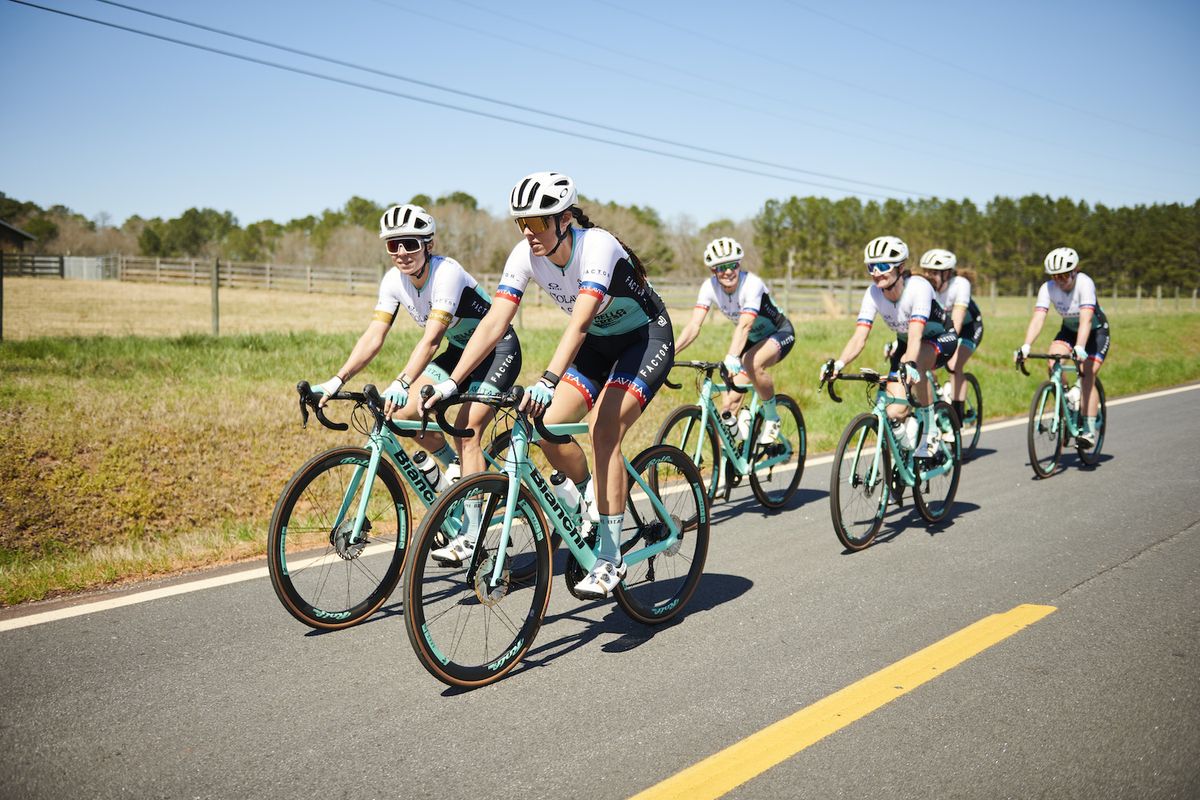 The team recently gathered near Athens, Georgia, where seven riders took part in a training camp, including returning veterans Tina Pic and Christina Gokey-Smith. New branding for the new Colavita/Factor jerseys were unveiled, revealing the white and aqua-green palette to mirror the signature colour of their Bianchi bicycles.

The team will focus on criteriums again this season, aiming for top results and prize money at both SpeedWeek, a series of eight races in the Southeast that start April 22 in Spartanburg, South Carolina, and the national American Criterium Series, which begins April 9 in Anniston, Alabama.

Coming off a successful 2021 season which saw Colavita finish second overall as a team in the USA Crits series and Gokey-Smith third in the individual standings. Returning for a second year is Brittany Parffrey, who was fourth to end the year on the second day of the Winston-Salem Cycling Classic; Shannon Koch, who had 16 wins in 2021; and Ali LeCraw, who had a trio of top 10s in 2021 at SpeedWeek in first year as a pro.

Adding firepower for a full season will be multi-discipline standout Erica Zaveta, who has US championships as a collegiate rider in cyclo-cross and cross-country mountain biking. Last year she had six podiums for Colavita last year during SpeedWeek. She was part of Team USA at the Cyclo-cross World Championships, finishing 27th in the elite women’s field.

Anna Christian, who rode for LA Sweat and Visit Dallas DNA previously, won the women’s Collegiate Club Criterium championship in 2019. And the team will include Cara O’Neill, a collegiate road national champion from 2019, as a guest rider.

“We’ve got some new younger riders that have had a lot of successes in the collegiate scene. One is Anna Christian who will be racing Sunny King. She’s a previous collegiate crit winner. We’ve also got Erica Zaveta this year who is a fantastic lead-out as well as sprinter. Ali Lecraw is one of our new secret weapons – she’s new to the scene but super strong as well as returners Brittany Parffrey and Shannon Koch – who has been on a tear in the Florida scene,” Pic told Cycling News about the new team for this year.

“Christina [Gokey-Smith] is returning to sprint, but is still on a bit of a recovery from her crash last season in El Paso. She’s on good form though so just waiting for her to get cleared.”

Gokey-Smith had 11 top 10s last season, including fourth at Sunny King Criterium and sixth in US Pro Criterium National Championship. Pic also had 11 top 10s in 2021, which included a win at Sun City Criterium in September.

Pic’s 25-year-plus career, which began as an amateur in 1995, has ridden on several iterations of Colavita-sponsored teams, and going back to 2006 when it was Colavita Olive Oil-Sutter Home Wines. Colavita, the leading brand in premium extra virgin olive oil, Italian pasta, and Italian vinegar in the US, has sponsored women’s elite teams since the early 2000s. Pic was amped up for another year, but has had a challenging off-season due to a COVID-19 coronavirus positive, which forced her off the bike the past month. She will miss the opening of the American Criterium Cup race at Sunny King Criterium on April 9.

“I had some major complications from COVID. That thing is a monster. Somehow I ended up in afib [Atrial Fibrillation] for a month so just Monday they had to do a cardio version to get my heart back in rhythm. At least I was vaccinated and boosted. I’m afraid of what would have happened if I wasn’t,” Pic recounted.

“I thought I had escaped it since my symptoms were really rather mild… until I got the brain fog, shortness of breath.. all of it. I just got that weird brain fog. I mean I was missing turns on my rides I’ve been doing for ages, as if someone had refocused the lens on my camera. I was noticing things I didn’t notice and missing things I did notice. That went on for two weeks and shortness of breath. Still not perfect but hopefully on the right track.”

Pic has won the Athens Orthopedic ClinicTwilight Criterium on her radar despite the absence of hard training. The Georgia race, ready for a 43rd edition on April 30, is located in the college town where Pic went to graduate school, University of Georgia, and won her first collegiate cycling crown in 1995.

In the meantime, Team Colavita/Factor will have Pic supporting its team off the bike for the opening round of the American Criterium Cup, on April 9 at the Sunny King Criterium. SpeedWeek will begin April 22 in Spartanburg, South Carolina.