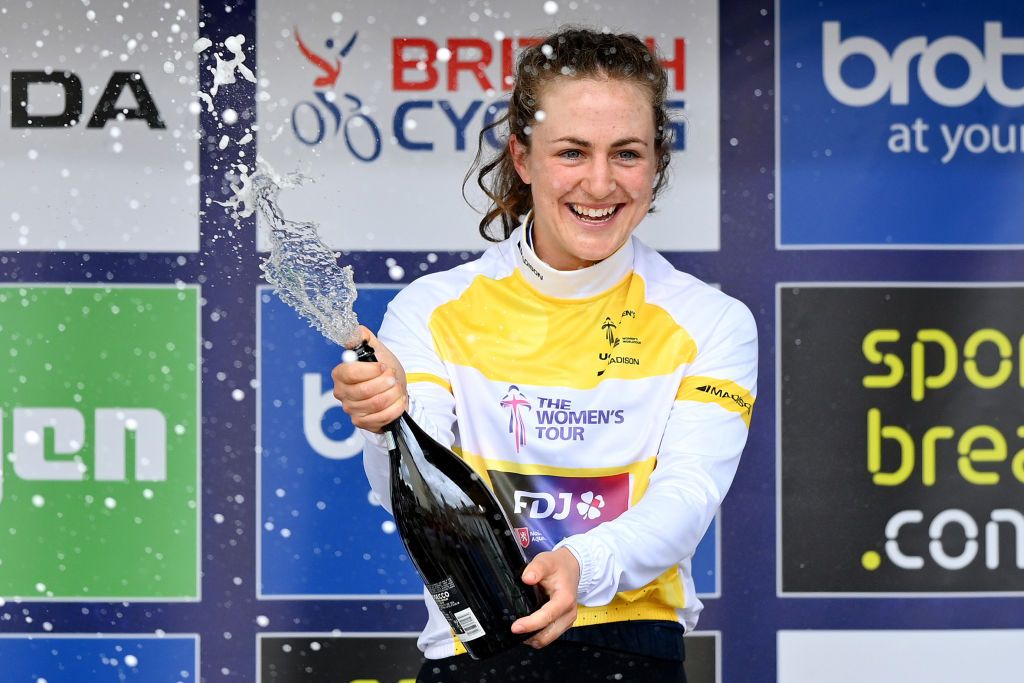 If and when opportunity knocks, Grace Brown will be there to open the door on an early stint in the coveted yellow jersey at the Tour de France Femmes avec Zwift. The Australian’s priority is to support FDJ-SUEZ-Futuroscope’s leader Cecilie Uttrup Ludwig in the race for the overall title. Still, she sees plenty of chances to make her mark on the race in the early stages and potentially become the next Australian to wear the leader’s jersey at the Tour since Rohan Dennis.

“I think we would be happy with it if we got the yellow jersey in one of those earlier stages. Any day in the yellow jersey is something special, so we won’t shy away from taking it earlier in the race, just because there is the rest of the race to go,” Brown told Cycling News in an interview just days out from the Grand Départ in Paris on Sunday.

“Particularly, if it were me who got the yellow jersey, then there wouldn’t be too much stress about defending that position because I’m not the GC rider on our team. It would be a thing to soak up and enjoy, though, without the pressure for the rest of the Tour de France.”

Brown is in her first season racing with FDJ-SUEZ-Futuroscope, and she was brought in for the Spring Classics and her strengths in the stage races. For example, she was recently second overall in the Women’s Tour. She told Cycling News that she would look for opportunities on stage 3’s climbs into Épernay and on stage 4 across the gravel roads into Bar-Sur-Aube.

“Our priority is the general classification, Cecilie is our lead rider, and we have Marta, who we expect to be very strong in the mountains. However, there are some stages earlier in the race where I might be given more free opportunities to try and get a stage result, obviously, with no risk to our GC position. If we can do both, that’s awesome, but if we have to choose one, it’s the GC,” Brown said.

“The last two stages will be where the GC is really decided, but I think there will be some splits in the GC on stages 3 and 4. Stage 3 is super hard with steep climbs, and I expect splits in the peloton to see how things will order out. Also, stage 4 with the gravel will be a difficult day. They won’t be the deciding stages because the long mountain climbs will do that later in the race, but you can lose GC on those two hard stages mid-Tour.”

The French team has steadily grown in recent years with specific goals for success at Tour de France Femmes, signing Danish Champion Uttrup Ludwig in 2020 and Marta Cavalli in 2021. Uttrup Ludwig is the outright team leader, but Cavalli’s recent success with victories at Amstel Gold Race, Flèche Wallonne and second overall at the Giro Donne, present another valuable card to play in the race for the yellow jersey.

The two mountain stages will take place in the Vosges on stages 7 and 8, culminating at the top of La Super Planche des Belles Filles on July 31. Having spent time with Uttrup Ludwig and Cavalli in the races this season, Brown believes the pair complement each other well and present a formidable challenge to outright race favourite Annemiek van Vleuten (Movistar).

“They’ve got some major similarities in their strength as climbers. They also have a lot of differences in their personalities. Cecilie has a huge personality, and Marta is a little bit quieter, but on the team, we bring them together very well,” Brown said.

“Each race we do together, we learn how we can use their strengths to complement each other. It will be advantageous for us to have two strong climbers in those final stages to use to play off each other. Annemiek is one of our main competitions, and if we can have two riders against her, it will put pressure on her to fight against them.”

Brown will also be representing Australia at the Tour de France, and she noted that several compatriots in the race would be vying for opportunities too. Some of the Australians to watch also include Tiffany Cromwell (Canyon-SRAM), Amanda Spratt, Ruby Roseman-Gannon and Alexandra Manly (BikeExchange-Jayco), Rachel Neylan (Cofidis), Anya Louw (AG Insurance-NXTG) and Australian Champion Nicole Frain (Parkhotel Valkenburg).

“We represent Australia alongside representing our trade teams, and we have many people specifically supporting us because we are Australian. I hope we can have a good showing at this first historical race. None of the Australians will be racing for the GC, but that doesn’t mean we won’t see a strong showing from any of us. We will be able to make our country proud,” Brown said.

FDJ-SUEZ-Futuroscope will line up as the most popular team on home soil, alongside other French teams Cofidis, Arkéa Pro Cycling, Stade Rochelais Charente-Maritime and St Michel – Auber93.

“There’s build-up about this race. The team made it clear that this was our number one objective for the whole year. We’ve got so many resources and staff doing extra work. Personally, I don’t feel that the team is putting extra pressure on the riders. We’re just trusted to do what we do best and what we’ve done for prep in every other race we target. They trust us to perform in our way. There’s no fear of not performing. As long as we get there and try our hardest at a race that we all know has a high priority,” she said.

The Tour de France Femmes is a new addition to the Women’s WorldTour this year, but it’s already one of the most prestigious on the calendar. Brown said there is much anticipation surrounding the event, and she’s eager to experience the race for the yellow jersey.

“I’m excited to experience what it will be like racing at the Tour de France. It’s a huge event and we are all anticipating the crowds, the hype, and the atmosphere of the Tour. I’m looking forward to going in with a strong team with big ambitions; it’s inspiring,” Brown said.

“I’m motivated in my training to be at my best level to get a result in the early stages, but I love playing the domestique role and going all-in for my teammates. I’m excited about this journey and battling it out every day.”