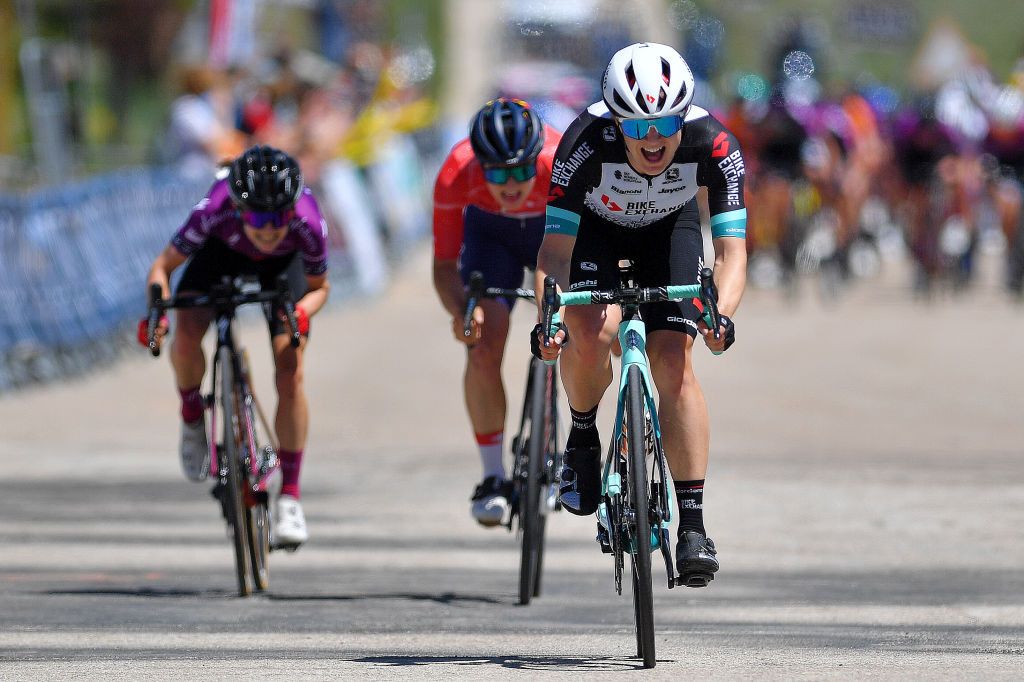 Grace Brown (Team BikeExchange) has delivered her second Women’s WorldTour win on the opening stage of the Vuelta a Burgos Feminas, continuing a roll of impressive results in 2021 which has seen the Australian rider step up onto the podium six times, or in half of her race starts.

Before October of 2020 Brown had never taken to the podium with an individual top 3 result in Europe – although she had amassed quite a few podium visits in Australia – but then the 28-year-old rider broke through with a second at Liège-Bastogne-Liège and a win at the 1.1 ranked Brabantse Pijl near the end of the year. In 2021 she started with two second places at the Australian Road National Championships, took another at Danilith Nokere Koerse, won her first Women’s WorldTour race at Brugge-De Panne, took third at the Tour of Flanders and then continued on to deliver this stage victory at the Vuelta a Burgos Feminas.

The first stage of the four day Spanish race, which is the only Women’s WorldTour event this month, was a lumpy 100 kilometres long. It started in Villadiego, included the categorised climb of Alto de Coculina halfway through and then worked its way toward a hilltop finish at Sargentes de la Lora.

“It was our plan to attack and try to win the stage,” Brown said in a media release. “We wanted to put a little bit of pressure on early on in the crosswinds and see if we could split the peloton. My plan then was to hold on until the last climb and then attack as we got to the crest and try to hold onto that until the finish.”

Brown, who this week was named as part of the Australian Tokyo Olympic Games squad, leapt out of the peloton on that final climb, with just over six kilometres to go, and Elise Chabbey (Canyon-SRAM) quickly jumped onto her wheel. Powerful 20-year-old New Zealand climber, Niamh Fisher-Black (SD Worx), then clawed her way to the leading duo. They established a clear gap but there was little time to pull out enough distance to give the trio much breathing space so Brown kept working and led out the sprint as they closed in on the line.

“Unfortunately they didn’t work a lot with me until the end, Elise Chabbey pulled a few turns and then it was a sprint against them and I got away with it,” said Brown. “I knew on a normal day if we had all pulled equal turns then I could probably win the sprint but I was a bit unsure if I had done too much, so I was relieved to win in the end.”

Brown had been on a short break after Amstel Gold Race, returning to racing at the Navarra Women’s Elite Classic in the middle of May, and taking fourth, before jumping into Durango-Durango Emakumeen Saria earlier this week, where she came 27th.

“I came into this race feeling pretty good after the last Spanish races so I was confident that if the stage played out as we planned, then I should have a pretty good chance today,” said Brown. “It felt really hard after I attacked, and you are never really sure if you will hold on, especially when the gap is quite small.”

That small time gap means that while she has pulled on the leaders jersey after the win, GC times are tight, with her two breakaway companions on equal footing and a large group of contenders five seconds back. This group includes Annemiek van Vleuten (Movistar), Anna van der Breggen and Demi Vollering of SD Worx,  Elisa Longo-Borghini (Trek-Segafredo) as well as Brown’s teammates Amanda Spratt  and Ane Santesteban.

The gaps are unlikely to change too much on stage 2, which potentially presents a chance for the sprinters that can find their way over the two category three climbs on the route. Then, however, it is a climb to the line of the remaining two stages with the overall race winner crowned after the stage 4 finishing atop the Lagunas de Neila.