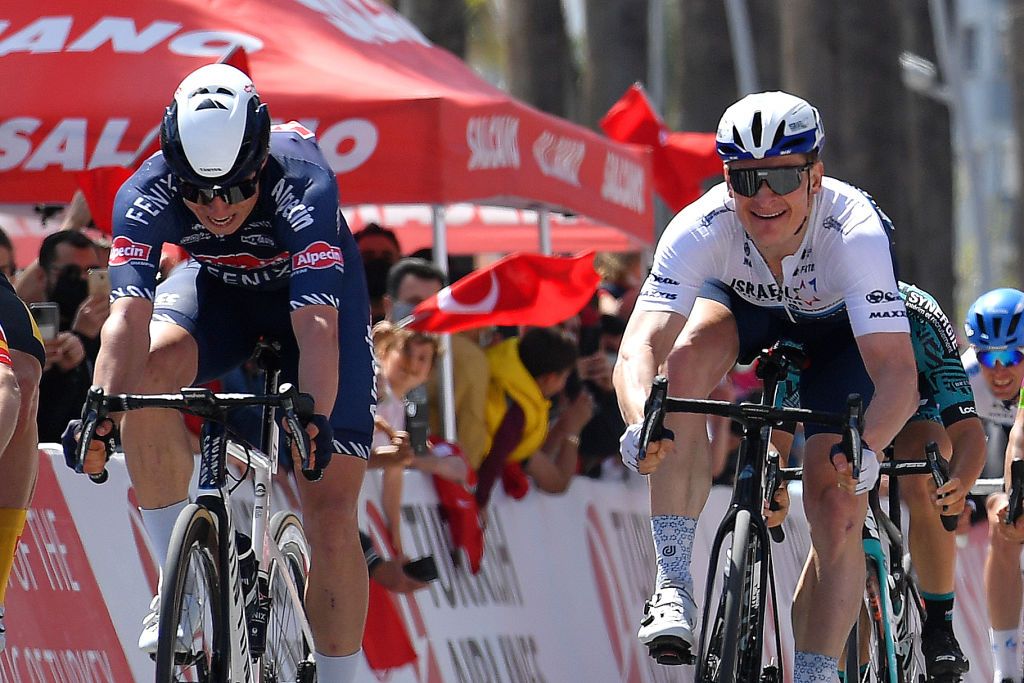 André Greipel came as close as it’s possible to get to a stage victory on stage 6 of the Tour of Turkey in Marmaris on Friday afternoon, missing out by a centimetre margin to Alpecin-Fenix’s Jasper Philipsen.

The German veteran took advantage of a stellar lead-out from his Israel Start-Up Nation team in the final kilometre of the stage, the fifth sprint of the race so far. After launching at 150 metres to go with five other sprinters poised to jump from behind, Greipel fell just short of taking his team’s fourth win of 2021.

Philipsen came up on his right, with Kristoffer Halvorsen (Uno-X) on the outside as triple stage winner and old rival Mark Cavendish (Deceuninck-QuickStep) battled with Stanisław Aniołkowski (Bingoal-Pauwels-Wallonie Bruxelles) on his left.

The men were five abreast at the line, but it was Philipsen who celebrated afterwards, leaving Greipel to reflect on a near miss.

“I wouldn’t say I’m frustrated, because there are worse things in life than a second place in a bike race,” he said after the finish.

“The team trust me and have confidence in my sprint. It’s just unfortunate that I couldn’t pay them back with a win today.”

Greipel, who took sixth-, third-, and fifth-place finishes on the opening three days of the race, is still looking for his first win at Israel Start-Up Nation after joining them from Arkéa-Samsic at the start of 2020. He still leads the current peloton in total victories on 156, and is still hungry for more ahead of his retirement at the end of next season.

A shoulder fracture robbed him of the chance to compete in February and March last year before racing shut down, while he wasn’t at his best at the Tour de France.

At the moment, though, his results look to be on an upwards trajectory, with a possible sprint stage left on either of the two remaining stages – even if the finishes are lumpier than they have been so far in the race.

“Unfortunately, this time I missed it by a few centimetres,” Greipel said. “We missed [Rick Zabel] in the train. However, together we will keep trying to get that stage victory here in Turkey.

“With the work we have done so far and a dominant lead-out in the past few days, I think we deserve a win here and we’re going to keep trying.”

The Tour of Turkey continues with a 160-kilometre stage from Marmaris to Turgutreis on Saturday, ahead of the final stage to Kusadasi on Sunday.