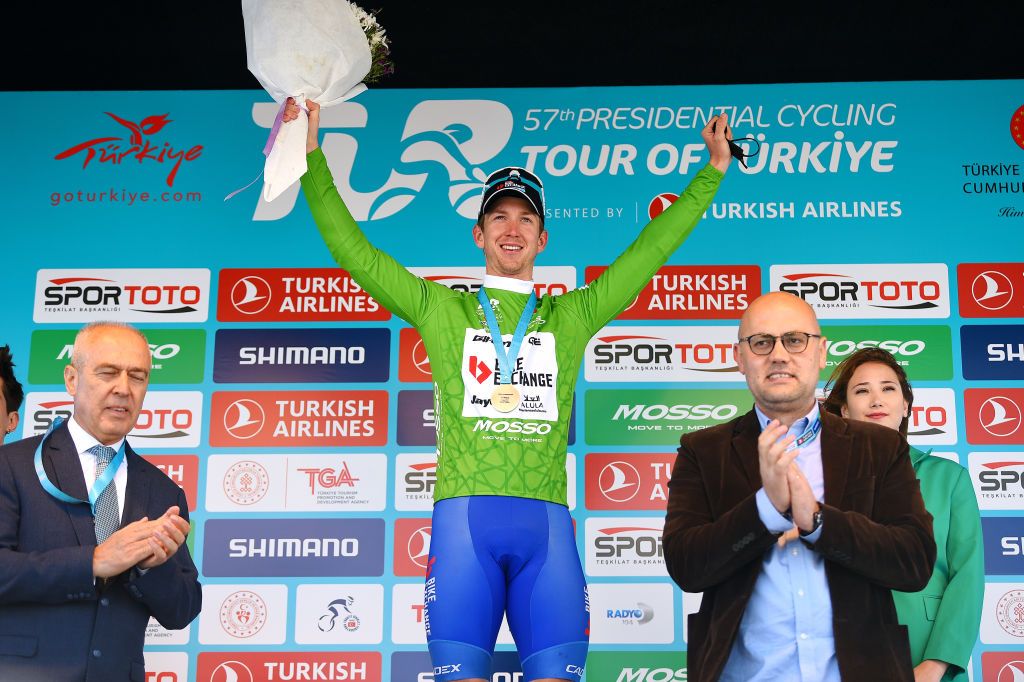 A big hope of Australian cycling since he won Stage 3 of the UCI 2.1 Tour of Fuzhou in China at the age of 18 with St-George Continental in 2017, Kaden Groves is coming of age in his third pro season with Team BikeExchange-Jayco.

After he won stage 2 of the Volta a Catalunya in Perpignan, he also took stage 2 in the Presidential Tour of Turkey, which gave him the overall race lead one day after his compatriot Caleb Ewan (Lotto Soudal) did the same.

“I’ve been very consistent this year,” said the Queenslander from Gympie who got five top 3 at the Tour of Oman and Tirreno-Adriatico. “I got one win and we really wanted to carry on that success. The win in Catalunya last week was nice but to win against the pure sprinters’ field like this is giving me a lot of confidence for myself and the team. I’d say it’s a better win than in Catalunya, especially because of the team’s performance today. We can certainly become a dominant sprint team.”

Team BikeExchange-Jayco was born in 2012 as a sprinters’ team under the generic name of GreenEdge with the likes of Robbie McEwen, Baden Cooke, Stuart O’Grady, Matt Goss and Allan Davis as flag bearers in the tradition of Australian sprinters. They passed the baton to Ewan who collected 29 bunch sprint victories from 2014 to 2018 before transferring to Lotto-Soudal while the Melbourne-based team switched its focus to Grand Tour general classifications with the Yates twins.

“I don’t know if I’m the new Australian top sprinter,” a humble Groves replied. “There are a lot of good guys coming through. Caleb’s still on top of his game, I think he’s the number 1 in the world. I wouldn’t say he’s my idol but I certainly appreciate what he’s done for Australian cycling. He’s a class athlete. I wouldn’t say I follow his footsteps but it’s also nice to win for this team after him.

“I’m 100 per cent a different kind of sprinter than him. I’m not as pure or as fast as Caleb but maybe more of a classics style of rider. I’m still trying to figure out what sort of rider I can be. At Catalunya I showed I was at a good level. Winning in Turkey is nice.

“One day, I’d like to win at the UAE Tour. This year I’ll race in the Vuelta, which will be my first Grand Tour. I think longer stage races and reduced bunch sprints should suit me pretty well.”

This is Groves’ first time racing in Turkey. “I followed the race because of Caleb [in 2019], Sam Bennett before him and Mark Cavendish last year, all being successful in this race,” he added. “It’s a good event for the sprinters! It helps to see where you’re at, so I’m very happy to win here today.

“I just want to continue challenge for the victory. I think the GC is too hard for me. I’m in good shape but I think but the mountain top finish is a little bit too long [stage 4].

“For sure I know about the Gallipoli stage [stage 6]. There are a lot of Australians and New Zealanders in this race. It’s a lot of our first time here. It’ll be a strange feeling to be there. It means a lot to us. A lot of Australian families have been affected from that war [First World War] and have family members who were there. For sure it would be special for an Australian to win there.”

Australians and New Zealanders celebrate the ANZAC Day every year on April 25 to commemorate the landing of their forces at Gallipoli on that day in 1915. Before Ewan and Groves, the previous Australian to have won a stage at the Presidential Tour of Turkey was Mark Renshaw, who bettered Goss in a nail-biting finale in Marmaris precisely on April 25 10 years ago.