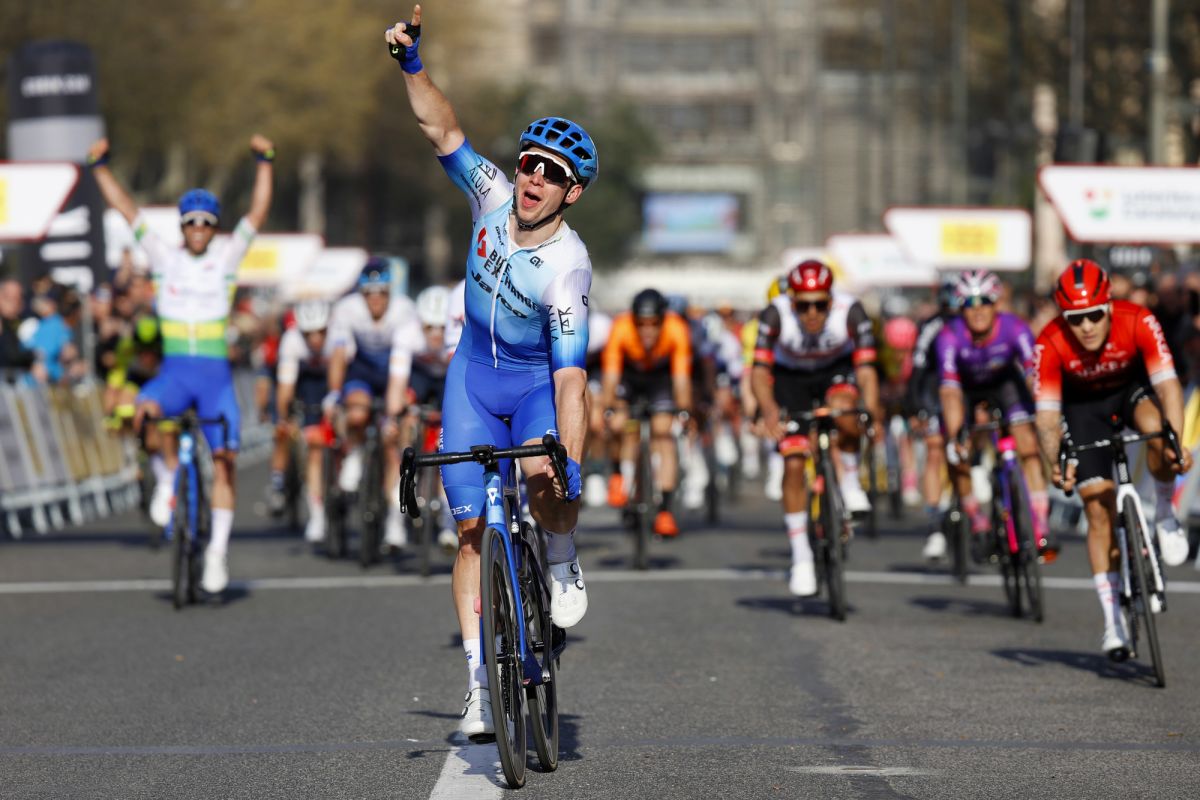 A fraught final 20 kilometres of stage 2 of the Volta a Catalunya left BikeExchane-Jayco delighted to have taken their second win in as many days courtesy of Kaden Groves while at the same time ruing a time loss for their GC leader Simon Yates.

23-year-old Groves followed up teammate Michael Matthews’ stage 1 victory with a first-ever WorldTour win of his own. On the final straight in Perpignan, it was race leader Matthews who led out his young Australian compatriot for a narrow bunch sprint victory.

BikeExchange-Jayco’s set of back-to-back victories was arguably even more notable, as the two Australians were the squad’s sole representatives in the front group after the peloton was ripped apart by a series of crosswinds and echelons.

The rest of the squad dropped back to assist stranded team GC leader Yates after he found himself caught up in a crash at the back of the pack and caught on the wrong side of a split shortly afterwards.

“I’m not totally sure what happened,” Groves told reporters of Yates, who lost 33 seconds at the finish. “The situation was very stressful, the bunch had split apart and thankfully I had Michael with me. But the whole of the rest of the team dropped back to limit Simon’s losses.”

Groves expressed confidence that Yates would be able to bounce back in the upcoming mountain stages, arguing that “he’s looking good after Paris-Nice” – where Yates won the last stage over the Col d’Eze in an impressive climbing display.

“He had some sickness like other people early on in the year, but he’ll be up there for sure tomorrow, I don’t think he’ll be too worried,” Groves commented.

For Groves himself, taking BikeExchange-Jayco’s second win in as many days and his first in the WorldTour to boot represented a significant landmark.

“It was quite tough in the crosswinds and there was only a small group at the finish because a lot of GC groups were trying to capitalise on that and put time into the other contenders,” Groves commented.

“So the run-in was hard. But we were lucky to have Michael there, and we could position ourselves well.”

Third in two stages of Tirreno-Adriatico this year but with his last bunch sprint wins coming nearly two years ago on home soil Herald SunTour, Groves said he had been “close to the win on several occasions, but it’s mine and Michael’s first [sprint] wins for about two years. It couldn’t have started any better.”

From hereon, in any case, while the team now switches its focus to the GC battle, Groves will be concentrating on getting through two brutal mountain stages as best he can.

On the other side of the Pyrenees, there’s still the chance of one more bunch sprint at least on Friday.

“I liked this stage, and I picked this stage out to get the victory,” he added. “I can’t believe I’ve got it. Maybe later in the week we can have another sprint.

“I just have to take it day by day and try and survive the best I can,” Groves said. But Tuesday’s triumph will surely help make any pain he feels on the climbs considerably less hard to handle.