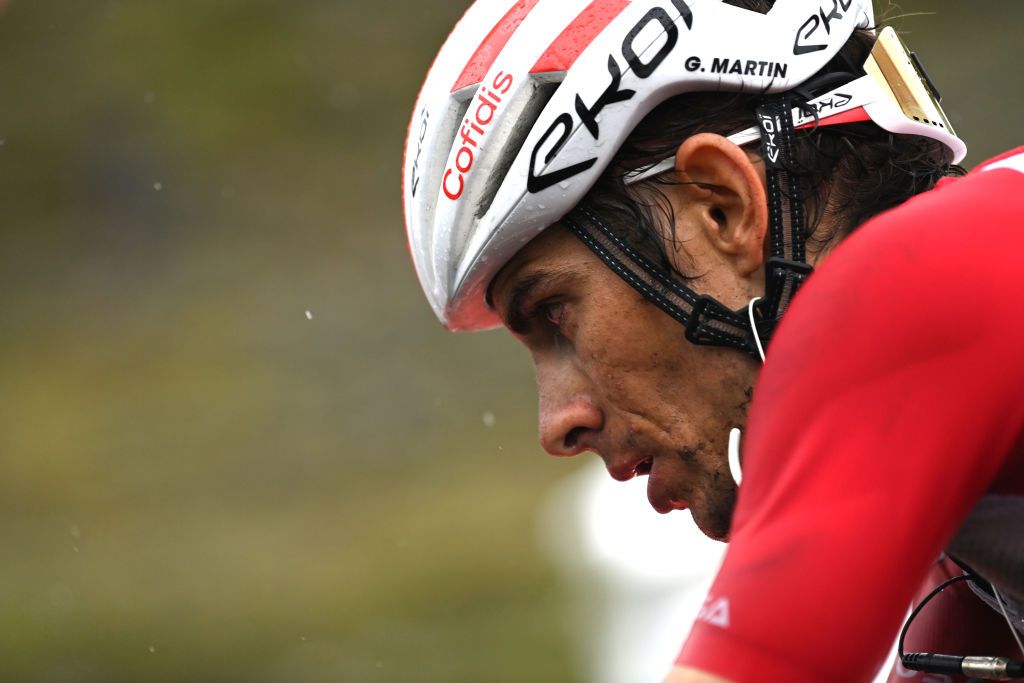 An injured Guillaume Martin slipped down three spots on the overall rankings on stage 17 of the Vuelta a España though, after suffering following a crash in the previous stage, limiting the fall to just fifth place was an outcome that was perhaps better than the Cofidis rider expected.

The French rider, who came eighth in the Tour de France this year, had been in second place at the start of the day just 54 seconds back from the red jersey of Odd Christian Eiking (Intermarché-Wanty-Gobert) but had struggled to the end of stage 16 after getting caught in a crash, where he hit his left leg, back and his rib, resulting in breathing difficulties.

“Yesterday I had really bad feelings so I am not completely confident about today, but you never know how the body reacts,” said Martin before the stage. “I’m quite pessimistic to be honest, but I will give everything and I will see.

“Sometimes it is also a matter of luck. And maybe sometimes miracles happen, so I will see. Yesterday, I would have said that I hope for the red jersey, but right now I just think about reaching the finish in the best shape possible and without losing too much time.”

It wasn’t an easy day to be nursing an injury, with wet conditions and aggressive racing in the 185.8km stage across the Asturias mountains, which included three categorised climbs, going twice up the category 1 Collada Llomena and finishing atop Lagos de Covadonga.

As the race played out, for a while it looked like Martin might hold firm on the overall, staying within the key chase group that was pursuing the break of Primož Roglič (Jumbo-Visma) and Egan Bernal (Ineos Grenadiers) until the final ten kilometres. However, he then slipped away.

“I was hoping for a quieter day but it was quite the opposite,” said Martin on Twitter after the stage. “I had better feelings than I thought. I managed to hang on but in the end it was harder.”

Coming together with teammate Rémy Rochas, Martin fought to limit the losses, ultimately finishing in 15th place, four minutes and 46 seconds behind stage winner and race leader Roglič. That saw him slip three spots on the overall to fifth, 4:16 behind the red jersey, but only just over a minute off the podium.

“Battle against myself and against the pain today,” said Martin, who entered the Vuelta with a top-ten finish and stage victory as a target. “15th in the stage, and now 5th overall: a result that I did not expect this morning when I woke up, following my crash.”

Martin and the rest of the contenders now face another tough day in the mountains, with stage 18 delivering three classified climbs before reaching the brutal finale of the Gaimoniteiru, nearly 15 kilometres long and with an average gradient of 9.8 per cent.