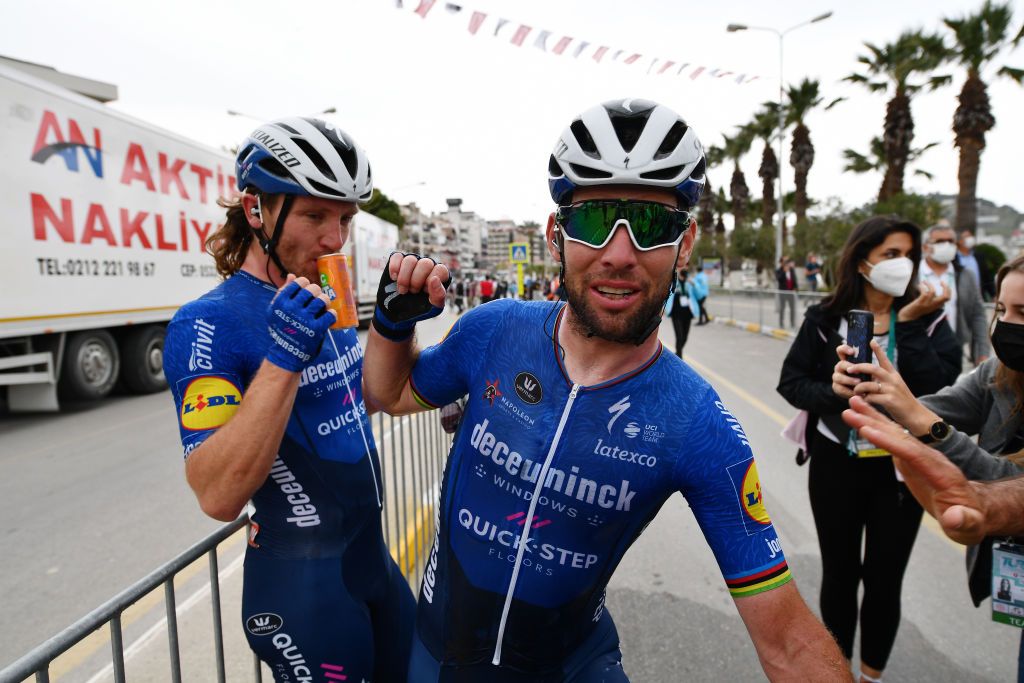 Mark Cavendish can cap an impressive comeback season with a stage win at the Tour de France, according to the man responsible for his upturn in form.

The Manx Missile received an 11th-hour call-up to the Deceuninck-QuickStep Tour team after an injury sustained in training ruled out Irishman Sam Bennett.

And coach Vasilis Anastopoulos says that despite the late change, Cavendish – returning to the biggest race in the cycling calendar for the first time since 2018 – is ready to hit the ground running when La Grande Boucle gets underway in Brittany on Saturday.

Speaking on the latest episode of the Tour de Greaves Cycling Show, the former Greek national champion said: “The decision was made at the weekend so we knew that we had to let Cav prepare like he was going to the Tour, just in case something happened to Sam.

“The preparation wasn’t ideal because he didn’t have any altitude training but after the Tour of Turkey he had a short rest and then came to Greece with me and we had a nice training camp for 10 days, a hard camp.

“He’s done a good block of racing and then last week he won the final stage of the Tour of Belgium against some of the best sprinters in the world.

“He’s shown that he’s in good condition, he continued to train last week and I’m confident he’s going to the Tour in a shape which will allow him to win at least a stage.”

Cavendish has five victories to his name already this season – four at the Tour of Turkey in April and the final stage at the Tour of Belgium earlier this month.

That win in Beringen was the most impressive, the 36-year-old getting the better of the likes of Tim Merlier, Pascal Ackermann, Dylan Groenewegen and Caleb Ewan.

But Anastopoulos says he’s not felt the need to talk to Cavendish about his Tour ambitions, and even less so about him being just four stage victories away from Eddy Merckx’s record of 34.

He said: “Cav just being at the Tour is the biggest surprise that has happened this year – just have a look at what happened over the last three years!

“Being a happy Cav was our first priority. Cav winning a stage this year in any race was a second priority. Now being at the Tour is huge.

“Whatever happens now is bonus. We’re not going to chase down the record of Eddy Merckx because that’s something he never talks about; it’s always the media and the journalists that ask those questions.

“I am just happy that Cav will be at the start on Saturday. If he wins a stage then chapeau, if he doesn’t no one is going to blame him.

“He’s come from nowhere – he’s hadn’t won anything for the last three years. He’s gone through some really bad moments; he battled with depression, he almost quit last year and everyone knows the story.

“But he’s not finished yet!”

The 45-year-old says the team environment – and the fact Deceuninck–QuickStep ride Specialized bikes – are the main reasons Cavendish is happy again in the peloton.

He said: “He came back to his old family – the same people who were here when left in 2015 and still here in 2021. And he wanted to ride a Specialized bike.

“They told him he was going to start with a new guy – and he didn’t know me – but the connection was there from the first moment.

“We sat down and I had already tried to analyse what had gone wrong in the last year and I was keen on asking him questions. It was like talking to a teammate, to someone I had already known for 10 or 20 years.

“I tried to modify his training, to change to the things he would have done on the track. But the biggest influence I’ve had on him is the chemistry. We don’t need to say very much – what I’m thinking is the same thing as he is thinking. We knew from day one that it would work.

“If I’d have said to anyone in November that on June 22 Cav would already have five stage wins and he was going to ride the Tour de France everyone would think I was crazy!

“But I knew back then that the champion that Cav has inside would come out somehow.”

SOURCE: CyclingNews   (go to source)
AUTHOR: Andrew Greaves
All copyrights for this article, including images, are reserved to the original source and/or creator(s).