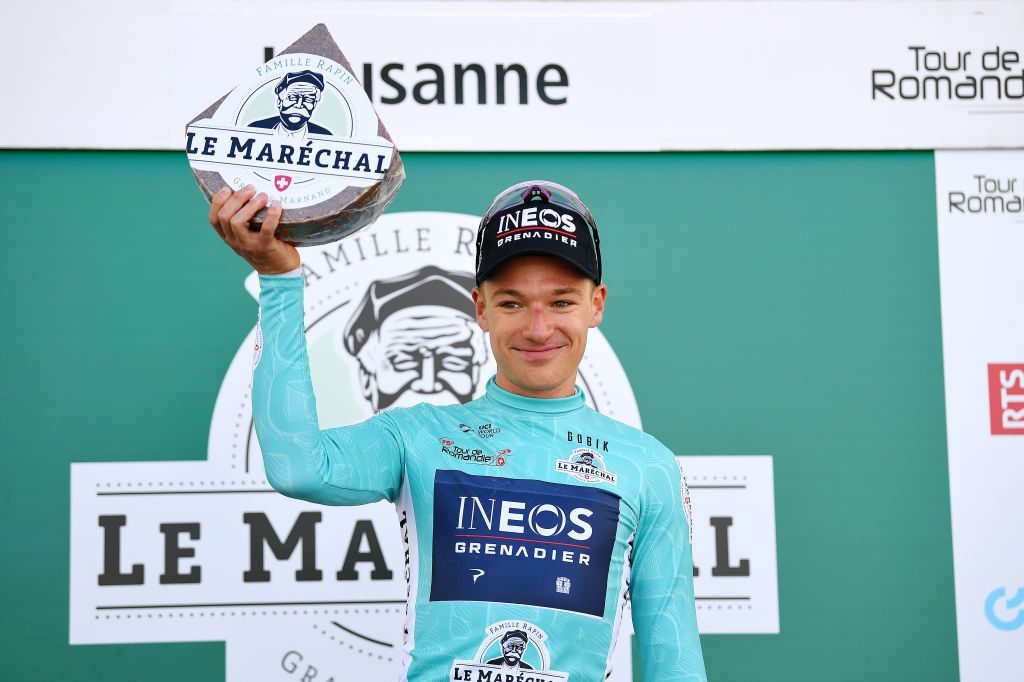 It would be hard for Ethan Hayter to improve upon the 2021 season: his first full season with Ineos Grenadiers ended with stage wins at Coppi e Bartali, Volta ao Algarve, Vuelta a Andalucía, a silver medal at the Tokyo Olympic Games in the Madison, two stages each at Tour of Norway and Tour of Britain, and the British time trial title, then a track world title in the Omnium two weeks later.

After having COVID-19 in January, Hayter got off to a somewhat slower start this season – a second place to teammate and World Champion Filippo Ganna at Tour de la Provence belied his off-season setbacks.

After fighting his way through the first six weeks of the season and finally scoring a win on stage 2 of Coppi e Bartali, he took a four-week break from racing. In his first race back, Hayter powered to victory in the Tour de Romandie prologue – his first WorldTour win – and confirmed his promise in a field stacked with talent.

“I’ve had few setbacks at the start of the year, so I’ve taken a bit of a break from racing and gone away and trained really hard,” Hayter said. “To come back like this is really nice. This time trial suited me, I thought I’d give it a crack and it worked out well.

“It’s been a while since I’ve last been racing, so it was a shock to the system,” he added. “I spent a lot of time at 600 watts on the uphill drags and I actually cornered quite fast, too. I went out hard and pushed on a few of the corners, though I took the last one quite steady as I was hitting 70 kilometres per hour.”

Hayter’s name was in good company at the top of the results sheet, with last year’s prologue winner Rohan Dennis (now with Jumbo-Visma) in second and teammate Geraint Thomas edged out of third by Felix Großschartner (Bora-Hansgrohe).

Although he did not win any stages here last year, Thomas won the 2021 Tour de Romandie with teammate Richie Porte taking second thanks to a consistent and persistent strategy. While Porte is not at the race as he prepares for the Giro d’Italia, Hayter – who hopes to make his Grand Tour debut later this year – is hoping the team can be equally as dominant.

“[Geraint] did a really good TT as well today and it’s looking good for the week ahead. We’d like to win as many stages as possible this week as well as the GC, too,” Hayter said.

Thomas also felt the prologue was a shock to the system after he finished Liège-Bastogne-Liège on Sunday, and missed out on third place by fractions of a second, leaving him tied at 10 seconds in fourth place.

“It could have been better. It was OK, it’s a funny feeling a prologue like that, especially after Liège on Sunday. I felt OK – just [went] full gas and tried to do the corners well. I just lacked that little in the end, but I’m happy with it.”

Thomas said his form is “getting better all the time” but is taking a cautious approach to his title defence.

“We’ll see how this week goes, obviously we’re going to try and defend, try to win the race again, but there are a helluva lot of strong guys here. We’ll see on the weekend. I’m still on the way up, but we’ll give it a good go. We’ve got a few other guys who will be in the mix for GC as well.”