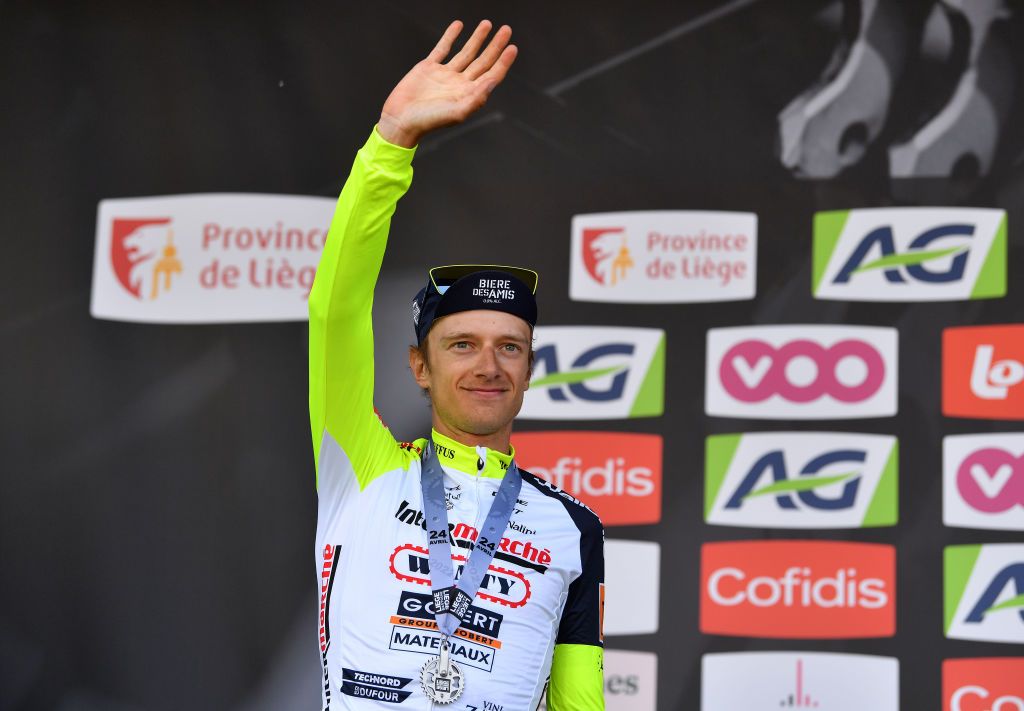 Following wins at Gent-Wevelgem and Scheldeprijs earlier this spring courtesy of Biniam Girmay and Alexander Kristoff, Intermarché-Wanty-Gobert ended their spring Classics campaign on a high at Liège-Bastogne-Liège as Quinten Hermans sprinted to a second-place finish.

26-year-old Hermans adds his result to a list of top placings earned by the team this spring, with Tom Devriendt’s fourth place at Paris-Roubaix another standout result for the Belgian squad who operate on a fraction of the budget of Classics powerhouses such as QuickStep-AlphaVinyl, Ineos Grenadiers, and Jumbo-Visma.

Hermans, a top cyclo-cross racer but not among the names expected to be in contention at La Doyenne, beat out Wout van Aert to take second place in Liège, leading home the chase group 43 seconds down on the winner, QuickStep-AlphaVinyl’s Remco Evenepoel.

After the race, Hermans said he didn’t know which position he was racing for on the flat finish by the River Meuse, such was the chaotic nature of the race late on.

“I didn’t know which place I was riding for,” he said in the post-race press conference. “It was kind of chaotic until Remco was away. I also saw Aleksandr Vlasov away and didn’t know if we caught him back.

“I crossed the finish, and I wasn’t thinking about places, actually. I was just thinking about getting the sprint. I saw Vlasov who I thought was still in front. I know Remco was in front, and I thought that maybe I’m sprinting for third place. At the second part of Roche-aux-Faucons, I was totally empty. I was just suffering, and I didn’t know the situation from this point.”

Hermans went head-to-head with Van Aert in the dash to the line at the end of the 257km race. In most situations, the Jumbo-Visma leader would be easily the favourite to have taken second, but it was Hermans who prevailed, jumping out of the wheel to blast past at the line.

“I knew when I was with Wout I could follow him if he didn’t put me in the wind, but I didn’t know if I could beat him at all, so it was also a surprise,” Hermans said.

“He accelerated I think at 200 metres to go, and I had no wind at all until 100 to go. Then I had this little push, and I was kind of surprised I was in second position. I don’t want to say it was easy, but I was just well-positioned, and everything came into place like it was the whole day.”

Hermans, who hadn’t been part of his team’s successful cobbled Classics squad, instead kicking off his spring Classics campaign at La Flèche Wallonne earlier this week, said that he and his teammates in the Ardennes had taken inspiration from the likes of Girmay, Kristoff, and Devriendt

“It’s always hard to say but it can’t be coincidence if you look at the whole spring Classics, I think,” Hermans said of his team’s success. “Of course, since Amstel Gold Race, we’re a completely different team than was at the Flemish Classics.

“We also kind of felt the pressure because those guys did very well, and we come in a different field of riders again. But of course, it motivates us, and, in the end, it was nice seeing the success of the guys in the Flanders Classics. The atmosphere is more relaxed and motivated if our plan that we made before the season works.

“I think the whole team got better,” he said when questioned about how the squad have outperformed expectations this spring. “We now have food coaches, the atmosphere is amazing, and we all work together very well.

“We know we have a small budget, one of the smallest in the WorldTour, and we have to deal with it. But I think that, at the moment, we are the best team to work with this budget. Hats off to the team and to everyone. We achieved those things but it’s all the team behind us and we can be very grateful for that.”