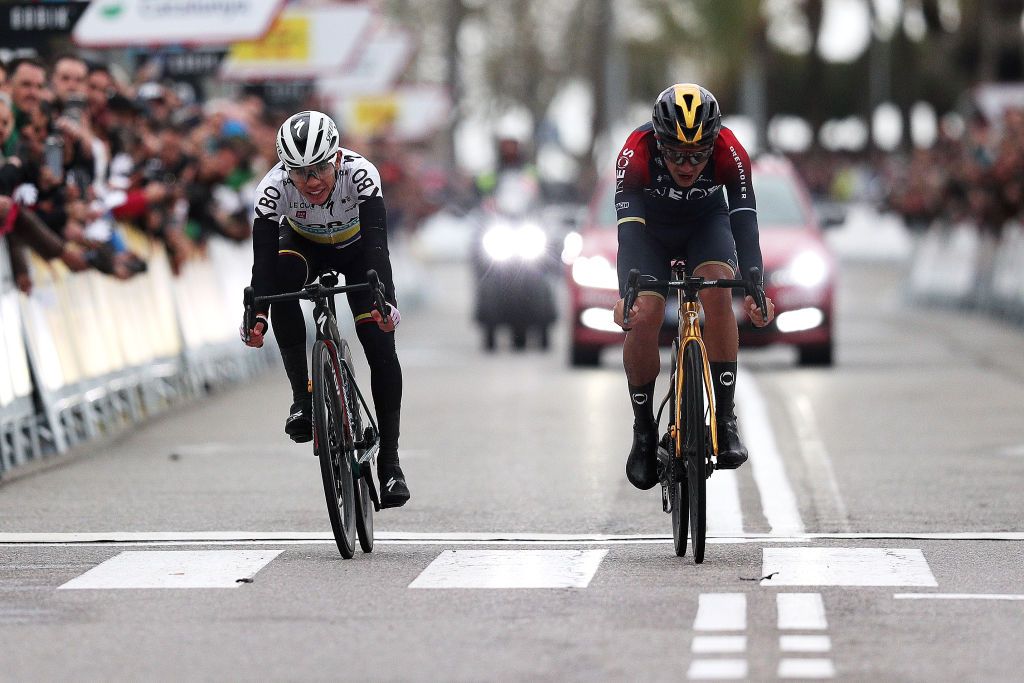 Sergio Higuita (Bora-Hansgrohe) took the lead of the Volta a Catalunya on stage 6 after mounting an audacious two-man assault for 130km through the Prades mountains alongside Richard Carapaz (Ineos Grenadiers).

Carapaz took the stage win in Cambrils, just about outsprinting his breakaway companion at the line and moving up to second overall in the process. Former race leader João Almeida (UAE Team Emirates) finished in the chase group at 48 seconds down to tumble to third place overall.

After a hectic uphill start to the day in bad weather, which saw no break group manage to get away, the race split up on the opening climb of the Col de les Llebres. There, the peloton dissolving into an elite GC group, while Higuita and Carapaz took their chance to attack on the hilly terrain following the descent.

The pair quickly built a minutes’ gap on the tough terrain that followed, while back in the chase UAE Team Emirates received little assistance from other teams. Their advantage maxed out at 3:30 at one point and heading into the final 50km it was still up at three minutes.

Help in the chase eventually came from Bahrain Victorious and Uno-X, though the combined efforts of the teams came too late to eat into the gap Higuita and Carapaz had built. Heading over the final climb of the Col de la Teixeta, they enjoyed a two-minute gap, one that scarcely changed on the downhill run back to the coast and the finish.

Heading into the final kilometre, Higuita and Carapaz had it in the bag, still a minute up on the peloton. There was no gentlemen’s agreement between the pair at the line, however, with Carapaz coming from the wheel to take the stage win by inches.

At the end of a momentous day for the general classification, Higuita leads Carapaz at the top of the shaken-up standings by 16 seconds, while Almeida follows in third at 52 seconds. Quintana is the last man within a minute of his compatriot in fourth at 1:08.

In contrast to the first five days of the race, the sixth stage of the Volta a Catalunya started under a downpour in Salou, with 168.6 miserable kilometres awaiting the riders over mountainous terrain as they circled back to the coast and Cambrils.

Attacks flew from the very start of the race as the road turned uphill almost immediately with the peloton heading inland to the Prades mountain range. Steven Kruijswijk (Jumbo-Visma), Casper Pedersen (Team DSM), and Simone Petilli (BikeExchange-Jayco) were the first group to get away.

The trio’s advantage was never extended more than 20 seconds, however, and they were brought back after 20 kilometres as Kruijswijk’s teammate Rohan Dennis countered. He, too, was brought back before the Col de les Llebres (7.2km at 6 per cent) started, with the peloton quickly fracturing as an elite group of GC riders and climbers emerged at the front.

Ineos Grenadiers’ young talent Luke Plapp led the way over the KOM, while on the hills following the descent, Higuita (seven seconds down on Almeida) and Carapaz (17 seconds back) stole a march on the group, jumping away in a two-man attack with a mammoth 130km to go.

The pair quickly built a gap with little response from behind, and at the Capafronts, 10km later, they were 1:30 up the road. Carapaz and Higuita picked up the three and two bonus seconds at the intermediate sprint before taking the descent to Ulldemolins.

By the time they reached the town, with 90 kilometres to run, the duo had an advantage of 2:30, which would grow by another minute as they went over the next uncategorised climb and downhill to the 70km to go mark.

UAE Team Emirates worked at the front of the chasing group with Rui Costa, George Bennett, Juan Ayuso, and Marc Soler leading the way. The team made little headway into the lead of Carapaz and Higuita, though. As the pair traversed three uncategorised hills between the 60 to 40km to go marks, their advantage still lay at three minutes with few willing to aid UAE in the chase.

At 40km to go, Uno-X took the front to work for their leader, seventh-placed neo-pro Tobias Halland Johanessen. The Norwegian team helped bring the gap down to two minutes within 10km, while Bahrain Victorious also contributed to the chase as the riders headed towards the final climb of the day at Teixeta.

That time gap held as the riders headed up the 5.6km, second-category climb, with a largely downhill run awaiting them for the final 28km. That gap closed to 1:25 on the initial descent, with 19-year-old Ayuso zipping off the front of the chasers as Bahrain led the group down.

Higuita took the three seconds at the day’s second and final intermediate sprint, giving each of the two leader five additional bonus seconds. Behind Ayuso, the rest of the chase was split as Poels, Quintana, and Carlos Rodríguez (Ineos Grenadiers) moved off the front with several other Bahrain riders, leaving Almeida chasing behind.

Things came back together further down, with Ayuso also dropping back to the Quintana group at 13km to go. Up front, Higuita and Carapaz still lay 1:20 away, with Almeida’s race lead certainly gone by then. BikeExchange-Jayco joined the main peloton’s chase for the final 10km, succeeding in bringing back the Quintana group 2km from the line but with the GC and stage win long gone.

In the final metres it was Higuita on the front of the lead pairing. The Colombian champion looked all set to claim the stage win in the two-man finish before Carapaz nipped around the outside in the final 25 metres to nip it by the slimmest of margins.