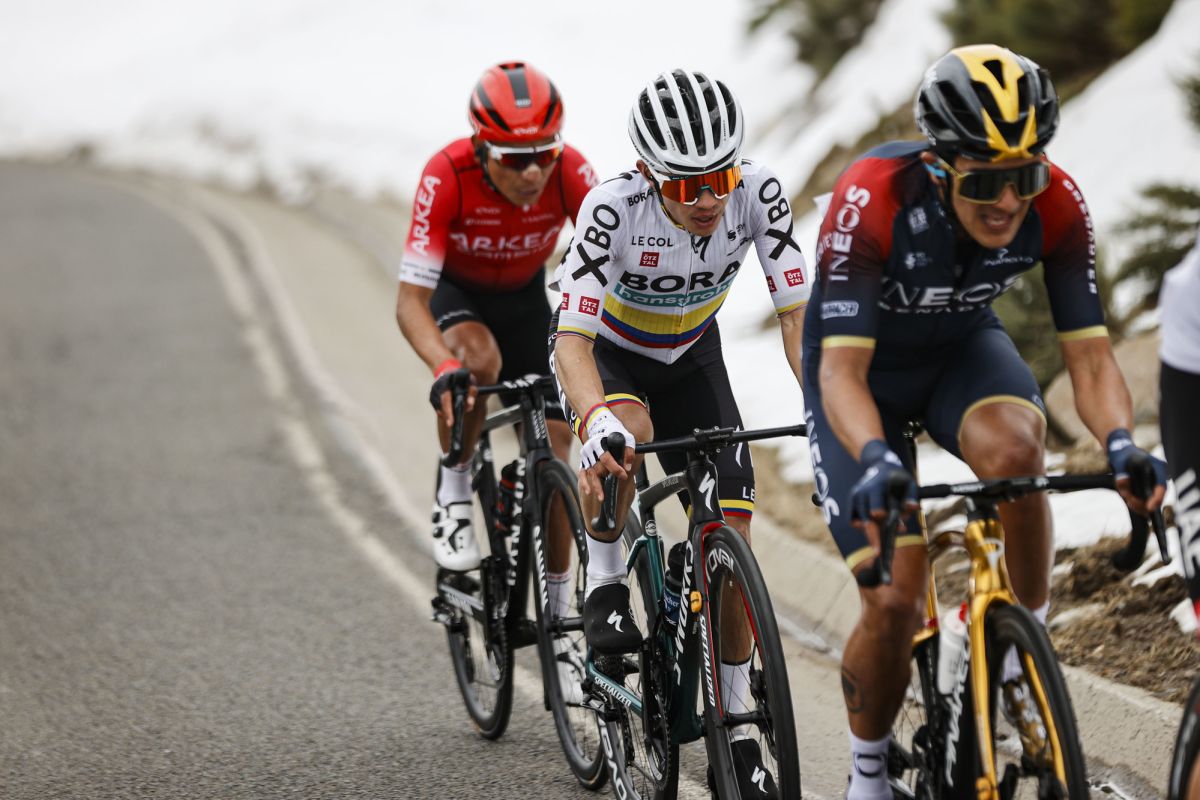 Hunched over the handlebars, his lungs heaving and a jacket cast over his shoulders to fight off the encroaching cold at the snow-enshrouded finish, Sergio Higuita (Bora-Hansgrohe) looked more than spent after the three-way duel that decided the toughest stage of the Volta a Catalunya.

The reigning Colombian National Champion was pipped to the finish by Nairo Quintana (Arkéa-Samsic) and João Almeida (UAE Emirates), which meant following stage 4 Quintana had the lead to celebrate and Almeida the day’s victory. Despite coming off the worse in both of those battles, Higuita rightly pointed out that after taking third at the line he had moved up to a provisional third place on GC and being just six seconds off the overall lead was hardly a poor outcome either.

Higuita was first on the move when Richard Carapaz (Ineos Grenadiers) delivered a long drive with two kilometres to go which poleaxed former leader Ben O’Connor (AG2R Citroën). Then after that charge away by the Ecuadorian imploded in almost as dramatic style as it had started, another attack by Quintana was also followed by the Colombian.

The two failed to collaborate,  though, allowing Almeida to regain ground and then try his own move but that attack also failed to shake the other two. The seemingly interminable series of stalemates was finally resolved in the last 100 metres, when Higuita found himself marginally less well-positioned after his wheel slipped going into a short section of packed earth that abruptly replaced the preceding tarmac on the stage’s final corner.

It was only a tiny problem, but with each rider’s strength levels ebbing fast, the slightest nuance in positioning was enough to leave Higuita out of the running for the win.

“The leader was in trouble, I followed Carapaz, I went a bit too soon by following him but that’s cycling, you have to risk things sometimes,” Higuita said afterwards when asked to analyse how a fiddly, fraught series of attacks and counter-moves had played out.

“The important thing is that you are motivated and it’s nice to be racing in the National Champion’s jersey and doing well.”

Higuita recognised he had burned a few too many matches in shadowing the Olympic Champion, saying “at the end I spent a lot of energy chasing him.”

Still, that was only the first of his problems.

“Almeida went flat out afterwards, I tried to get after him, but that last corner was very dangerous, my wheel slipped a bit,” he said. “And then we were all pretty exhausted, the altitude played a part because we’re at 2000 metres  [above sea level] here so it was a very hard stage.”

In the first season of a three year deal with Bora-Hansgrohe, having moved on from EF-Education First last year, Higuita has already notched up a stage win at the Alto do Malhao in the early season as well as the Colombian Nationals win.

Then in Catalunya, taking fourth in La Molina, just behind new race leader Quintana  constituted one warning salvo of the current climbing strength of the 24-year-old. Ben O’Connor may have been out of reach on the Volta’s first summit finish but at Boi Taull, 24 hours later, Higuita came within a whisker of his biggest win since a stage of the Vuelta a España back in 2019 in the sierras of Madrid.

Losing by so little might have dented the morale of a less optimistic rider but as the ever-upbeat Higuita insisted, “the good news is I was up there and I could get third which means I’m on the podium as well.”

The GC, too, is still close so between the Pyrenees on Thursday and the Barcelona showdown on Sunday, there’s still room for success for Higuita in Catalunya.